The eighth of August is kept in some places as the feast of the Fourteen Holy Helpers, sometimes called the Auxiliary Saints in English, who are venerated for their efficacious intercession and protection in certain regards, especially against a number of maladies and dangers. The devotion to these Saints as a group originated in Germany in the fourteenth century, during the period of the Black Death; they are called Nothelfer in German, ‘helpers in need’. The devotion spread to several other parts of Europe, and grew in popularity, being endowed with special indulgences by Pope Nicholas V (1447-55). It would seem from the liturgical books of that period that they were not kept with a feast per se, but a votive Mass in their honor is found in several Missals. In the Cracow Missal of 1483, we find the following rubric introducing the feast.

The Mass of the Fourteen Holy Helpers, approved by Pope Nicholas, …it is powerful on their behalf, however so much one is in great illness or anguish or sadness, or in whatsoever tribulation a man shall be. It is powerful also on behalf of the imprisoned and detained, on behalf of merchants and pilgrims, for those that have been sentenced to die, for those who are at war, for women who are struggling in childbirth, or with a miscarriage, and for (the forgiveness of) sins, and for the dead.

In the Missal of Bamberg, the collect of the feast reads as follows:

Almighty and merciful God, who didst adorn Thy Saints George, Blase, Erasmus, Pantaleon, Vitus, Christopher, Denis, Cyriacus, Acacius, Eustace, Giles, Margaret, Barbara and Catherine with special privileges above all others, so that all who in their necessities implore their help, according to the grace of Thy promise, may attain the salutary effect of their pleading, grant to us, we beseech Thee, forgiveness of our sins, and with their merits interceding, deliver us from all adversities, and kindly hear our prayers.

The words “according to the grace of Thy promise” here refer to the tradition that each of these saints received a promise from God that their intercession would be particular effective on behalf of those who honor the Saint. Thus, in the proper office of Saint Margaret of Antioch, we read the following antiphon, “Let all people magnify the holy name of the Lord, who at the last requests of Saint Margaret promised that, at the instance of her prayer, He would give the rewards of life to those who worthily keep her solemn feast; and may He make us their fellows, and mighty in love, unto His praise for all ages without end.” 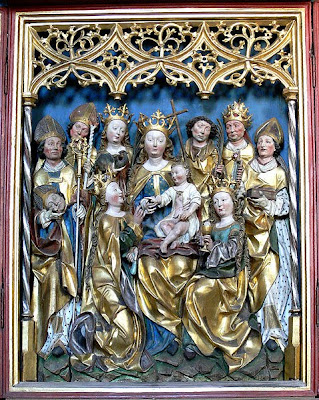 The alterpiece of the Fourteen Holy Helpers, from the now-suppressed Heilsbronn Abbey in Bavaria, 1498.

The Fourteen are all martyrs, except for Saint Giles; as is so often the case with the medieval conception of patron Saints, the diseases they are associated with refer in several cases to the manner of their martyrdom. Thus, Saint Acacius, who was crowned with thorns, and Saint Denis, who was decapitated, are invoked against headache. In some places, one or the other of the traditional fourteen was replaced with a more popular local Saint; in France, the Virgin Mary was added to the group, and they were called the Fifteen Helpers. Under this later title, the devotion was formally suppressed by the Sacred Congregation of Rites in 1628, the prohibition against it then being renewed on various occasions. It is not at all clear what lead the Congregation to this action; the decree of suppression associates the Mass of the Holy Helpers with certain Masses “circulated under the name of Saint Gregory for the living and the dead”, and another Mass “of the Eternal Father.” It may simply be that such Masses were regarded as inauthentic additions to the Roman Rite, being unknown at Rome itself. The devotion continued, however, and is still found in various places; there is a large pilgrimage shrine dedicated to them in Bad Staffelstein, Bavaria, and many churches have altars in their honor.