"If, on the one hand, the West continues to provide evidence of zealous evangelization, on the other hand anti-evangelical currents are equally strong. They strike at the very foundation of human morality, influencing the family and promoting a morally permissive outlook: divorce, free love, abortion, contraconception, the fight against life in its initial phases and in its final phase, the manipulation of life. This program is supported by enormous financial resources, not only in individual countries, but also on a worldwide scale. It has great centers of economic power at its disposal, through which it attempts to impose its own conditions on developing countries. Faced with this, one may legitimately ask whether this is not another form of totalitarianism, subtly concealed under the appearances of democracy."

First, let’s start with some basics.

Homosexuality is a lifestyle not a birthright.

Homosexuality is a sin, morally degenerate, immoral and potentially causes severe diseases such as AIDS which is communicable.

God created Adam and Eve, not Adam and Steve.

Homosexuality is an abomination and an affront against God. 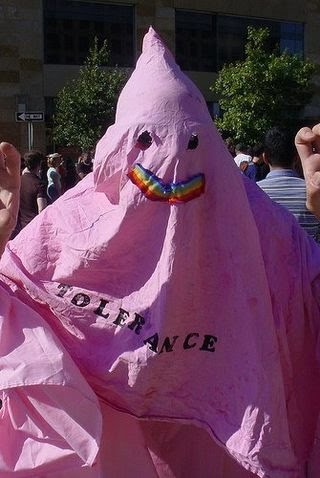 4 posted on 05/28/2010 8:23:08 AM PDT by GonzoII ("That they may be one...Father")
[ Post Reply | Private Reply | To 1 | View Replies]
To: Ev Reeman
...causes severe diseases such as AIDS which is communicable
This makes no sense. You could say that Homosexual activity it spreads communicable diseases but you can't say it causes an then spreads them.

Aids has traced to one SF Queer,They have no rights and should stay out of sight.

6 posted on 05/28/2010 8:32:58 AM PDT by Cheetahcat (Zero the Wright kind of Racist! We are in a state of War with Democrats)
[ Post Reply | Private Reply | To 1 | View Replies]
To: markomalley
"Desensitization aims at lowering the intensity of antigay emotional reactions to a level approximating sheer indifference; Jamming attempts to blockade pr counteract the rewarding 'pride in prejudice'..by attaching to homohatred a pre-existing, and punishing, sense of shame in being a bigot....Both Desensitization and Jamming...are mere preludes to our highest - though necessarily very long-range - goal, which is Conversion.

"Desensitization"? I don't think so!

Yuri Besmenova called it DEMORALIZATION!!! ( Yes! I am shouting!) Next step: Destabilization.

The following is from the Communist Goals:

If they can’t get what they want through legitimate means, there is always terrorism:

Indeed it is.. They have put morality and Judean/ Christian absolutes on the defensive.. Great signs of the last day.

If you would like check out this powerful video.

Placemark for pingout tonight or tomorrow.