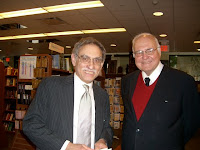 My wife, Frankie, and I were humbled to be among those who were present at the Mass in which our dear friend Hadley Arkes was received into the Catholic Church. It took place on the afternoon of Saturday, April 24, in the chapel of the Catholic Information Center in Washington, D.C.  His sponsor was Michael Novak, a dear man who truly lives the Gospel of Our Lord.  (The photo, taken by Frankie, is of Hadley and Michael prior to the Mass. Click it to enlarge).

Hadley, a frequent contributor to First Things and a member of its editorial board, is one of the most courageous and thoughtful defenders of the sanctity of human life. The Edward N. Professor of Jurisprudence and American Institutions at Amherst College, Hadley is the author of eight books including Natural Rights and the Right to Choose (Cambridge University Press, 2002), First Things: An Inquiry into the First Principles of Morals and Justice (Princeton University Press, 1986), and the forthcoming Constitutional Illusions and Anchoring Truths The Touchstone of the Natural Law (Cambridge University Press, 2010). At the upcoming meeting of the American Political Science Association in Washington D.C. (2-5 September 2010), I will be chairing a session on the book.

My recent book, Politics for Christians: Statecraft as Soulcraft (InterVarsity Press, 2010) is dedicated to Hadley, who, ironically, played a part in my own journey back to the Catholic Church while we were both visiting fellows in 2002-2003 at Princeton University in the James Madison Program in American Ideals and Institutions. I share this encounter in Return to Rome: Confessions of An Evangelical Catholic (Brazos Press, 2009):


After law school, I returned to Trinity and taught there for one year, until another opportunity came my way. I had applied for, and was offered, a visiting full-time faculty appointment at Princeton University for the 2002–2003 school year. Among the other visiting fellows at Princeton that year was Hadley Arkes, a legal philosopher from Amherst College. I had known Hadley for eight years, having met him in 1994 at Fordham University when he gave the keynote address at the annual meeting of the University Faculty for Life. Hadley’s works on jurisprudence and politics, as well as his writing style, which is an unusual though magnetic combination of philosophical rigor, literary flair, and mischievous genius, shaped the trajectory of my own professional aspirations. It helped expand my interests, which had been mostly in philosophy of religion and applied ethics, to include law and politics.


One night soon after we arrived at Princeton, Hadley called me at home to discuss several matters. In the midst of our conversation he asked, “Why are you a Protestant rather than a Catholic? Didn’t you grow up Catholic?” This line of questioning took me by surprise, since Hadley was Jewish and we had never discussed our faiths with one another, even though we had known each other for nearly a decade. I gave him the standard Protestant theological responses, ones that I firmly believed were adequate for the task at hand. He paused for a moment and said, “That’s all? That’s it? You were brought up Catholic. Your parents are Catholic. I don’t see why you don’t return to the Church.” I replied, “Hadley, you’re Jewish, and for you once you get past the ‘Jesus thing’ it’s just down hill from there. But for Protestants and Catholics these are big issues.” He chuckled and then asked if I would be interested in engaging in a private discussion with him and Robert P. George (a Catholic and Princeton Professor) on the differences between Protestantism and Catholicism. Although that discussion never took place, Hadley’s inquiry about my transition from Catholicism to Protestantism was the first time someone outside my immediate family had asked me such a question. 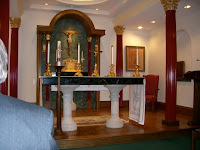 As providence would have it, I found out about a year ago from my brother, Patrick, a devout Catholic, that he had contacted Hadley and Robert ("Robby") George prior to our arrival at Princeton. He asked them to gently prod me about my Catholic roots and my Protestant faith. Until he had read the above passage from my book early last year, Patrick had not known that Hadley had done what he had requested. And because Patrick had asked Hadley and Robby to keep his communication with them in the strictest confidence, I did not know of my brother's request until he told me last year.

So, for Frankie and me, last Saturday seemed like we had caught a partial glimpse of what the author of Hebrews meant when he called Jesus “the author and finisher of our faith” (Heb. 12:2 KJV)

(Update: Robby George shares his thoughts on Hadley's conversion on the Mirror of Justice blog. The photo directly above, taken by Frankie, is of the chapel in which Hadley received the sacraments of baptism, confirmation, and holy communion. Click it to enlarge.) TOPICS: Apologetics; Catholic; Theology
KEYWORDS: novak
1 posted on 04/26/2010 1:34:24 PM PDT by NYer
[ Post Reply | Private Reply | View Replies]
To: netmilsmom; thefrankbaum; markomalley; Tax-chick; GregB; saradippity; Berlin_Freeper; Litany; ...
Welcome Home Hadley!
2 posted on 04/26/2010 1:34:58 PM PDT by NYer ("Where Peter is, there is the Church." - St. Ambrose of Milan)
[ Post Reply | Private Reply | To 1 | View Replies]
To: markomalley

The operation of divine grace on Hadley Arkes . . . and friends

Evelyn Waugh described his masterpiece Brideshead Revisited as a story about "the operation of divine grace on a diverse but closely connected group of characters."  Yesterday, I had the profoundly moving experience of witnessing the operation of grace on a particular person and a diverse group of people who were connected to each other through him.  That person, Hadley Arkes, the Edward Ney Professor of Jurisprudence and American Institutions at Amherst College, was received into the Catholic Church in a beautiful ceremony in the chapel of the Catholic Information Center in Washington,  D.C.  Enveloped in the love of his many friends and admirers, Hadley was baptized, confirmed, and received his first communion.

Hadley is an outstanding political philosopher and constitutional theorist who has dedicated much of his professional life to defending the dignity and rights of the child in the womb.  In remarks after the service yesterday, he explained that his faith in Christ had come through the Church.  The Church's moral witness, especially on the sanctity of human life and on marriage and sexual morality---a witness that has in our time made the Church a "sign of contradiction" to the most powerful and influential elements of the elite sector of contemporary western culture---persuaded him that the Church is, despite the failings of so many of its members and leaders, fundamentally "a truth-teaching institution."  In teachings that many find to be impediments, Hadley found decisive evidence that the Church is, indeed, what she claims to be.

Speaking of his Jewish identity, Hadley said that he neither would nor could ever leave the Jewish people.  His entry into the Church was for him, he stated, a fulfillment of his Jewish faith, and in no way a repudiation of it.  Invoking the testimony and authority of the late Cardinal Lustiger of Paris, he declared that he was and would always remain a Jew, though a Jew who, like the earliest Christians, had come to accept Jesus as "the Christ, the Son of the living God."

Hadley's sponsor was Michael Novak, who read aloud some charming verses he had composed for the occasion.  The other speakers were Daniel Robinson of the Philosophy Faculty at Oxford University, Michael Uhlmann of the Political Science Department at Claremont Graduate School, David Forte of the Cleveland State University Law School, and your humble correspondent.  The chapel was overflowing with people who had come from all over the country.  The spirit of joy was extraordinary.  Part of the reason for that, I believe, is that every person in the room had become a better Christian as a result of Hadley's friendship, long before Hadley himself entered the Church.  More than a few people credited Hadley for their own conversions (or reversions).  Like G.K. Chesterton, he spent years leading others into the Church before he walked through the door himself.

Once the heart is open, the Holy Spirit will provide everything one needs to find the way home.

I love these stories as they are all so different and yet essentially so much alike.

**Hadley, a frequent contributor to First Things and a member of its editorial board, is one of the most courageous and thoughtful defenders of the sanctity of human life.**

Once a person is thoroughly convinced of the sanctity of life, I would say that it is not that long of a trip to the Sacraments of Initiation of the Catholic Church, Baptism, Confirmation and Eucharist.