Some of our priests, particularly those who are celebrating the modern Roman liturgy ad orientem liturgicum, may be interested to know that finding an altar card for the modern form of the Roman liturgy just got quite a bit easier.

Myriad Creative Concepts, in close consultation with a few priests who have used this type of altar card, have just finalized development of just such a thing for the Latin version of the modern Roman liturgy. (The company could also easily produce customized vernacular versions or Latin-vernacular versions at request they also tell me.)

Evidently, some priests may wish to simply use the altar missal, but for those who would like this option, this card has been designed to appear very much as the altar cards used in the usus antiquior. 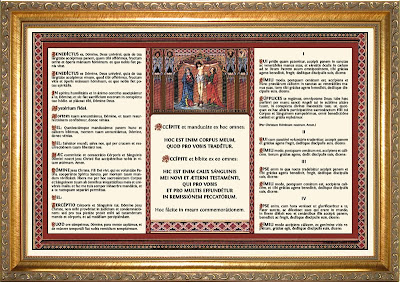 The company tells me they are coming up with some other visual designs for this same altar card.

It’s Halloween and that means only one thing. Christmas will soon be here! If you are considering a gift for your pastor, here is one gift that will keep on giving every day throughout the year.

My priest has it all memorized. He very seldom uses the missal although he has it close at hand for quick reference.