On this feast of St. Pio I decided to revisit a homily I delivered earlier this year, when my parish dedicated a special chapel in his name.

Italy was in crisis. The Red Brigade was sparking violence in Rome, and it was considered dangerous to travel around the country. For protection, people began carrying pictures of Padre Pio.

During this time, Padre Pio had to leave his village to visit Rome, and one of the other friars asked him, “Aren’t you worried about the Red Brigade?”

For a fuller picture of the man now known as St. Pio, I did a little Googling.

He was born Francesco Forgione in the small town of Pietrelcina, Italy in 1887. His parents were peasant farmers who tended sheep. Early on, Francesco knew that he wanted to give his life to God, and be a priest. He joined the Capuchins when he was only 15 and took the name of Pio, after Pope Pius V, the patron saint of Pietrelcina.

Like many friars, he was ordered to serve in the army during World War I. Near the war’s end, he returned to his monastery in Pietrelcina. And in the fall of 1918, shortly after celebrating mass, while praying in the church, he had a vision of a man standing before him dripping blood from his hands, feet and side. To his horror, Padre Pio discovered blood flowing from the same parts of his own body. It wasn’t long before news spread around the world that this anonymous friar from Italy had the stigmata -- the wounds of Christ. His life would never be the same.

He was often controversial – for a time, Rome suspended his faculties as a priest, and investigated allegations that he’d misused funds, seduced women and faked his wounds. None of it, of course, was true.

But through it all, Padre Pio persevered. Quietly. Humbly. Prayerfully. After a lifetime of poor health and great pain, he died in 1968. He was proclaimed a saint in 2002. Stories of his miracles and wonders abound. His mysticism. His gift for prophecy. But his greatest work on this earth was profoundly humble.

It came not only from how he lived, but how he listened.

Because his most familiar home… was the confessional.

During World War I, Padre Pio was drafted into the army, though due to his health, his service was minimal and did not last long. Upon his discharge, Padre Pio returned to his Order and served as a spiritual director at the seminary at San Giovanni Rotondo. His days were occupied by meditation, hearing confessions, and the teaching and spiritual direction of the young seminarians. It was here, while praying before a crucifix, that Padre Pio received the wounds of the stigmata, the wounds of Christ crucified. He would bear these wounds for the next 50 years, until the end of his life in 1968.

Padre Pio's Secret: His Shoulder Wound
What is the Stigmata? [Ecumenical]
Details of first investigation into Padre Pio’s stigmata revealed [Catholic Caucus]
The Stigmata of St. Francis of Assisi

St. Francis of Assisi -- The Wounds of Christ
Message, holiness of saint with stigmata more relevant now than ever, 'Padre Pio' author says
Update on Little Marie Rose Ferron(1936) stigmata of the Catholic Faith
Saint Gemma Galgani
The Miracle Of Damascus[Our Lady Of Soufanieh]- APPROVED By Catholic And Orthodox Bishops

Remembering Francesco Forgione -- a.k.a., Padre Pio
Pope: a life of prayer and charity like Padre Pio, against activism and secularisation [St. Pio]

Message, holiness of saint with stigmata more relevant now than ever, 'Padre Pio' author says
St. Padre Pio During Mass
Padre Pio and the Guardian Angel
Spiritual Counsels from Saint Padre Pio
What Does It Means To Be Canonized.(Padre Pio example)

"On that rainy gray day, March 7, 1997, Mr. Fuina, now 67, a retired N.Y.C. firefighter, drove down Division Avenue, Massapequa, when he noticed “what appeared to be a bum” waving at him. Mr. Fuina pointed to himself, as if to say, ‘me?’ The stranger, who had a long beard and was dressed in a speckled white outfit, nodded and asked, “Will you give me a lift, please?” He said he had waited all morning for a ride. Although Mr. Fuina never picked up hitchhikers, for some reason he agreed to take the man to Maria Regina Church, Seaford, as requested. “You have a sickness, would you like to discuss it with me?” said the man, when he was settled into the car, Mr. Fuina recalled." http://www.stwilliam.org/fuina_story.htm
5 posted on 09/23/2009 11:03:38 AM PDT by fatima (Free Hugs Today :))
[ Post Reply | Private Reply | To 2 | View Replies]
To: fatima

The monsignor at the parish I attend told us last year about meeting Padre Pio as a young priest. He was in Rome with some other priests and one of them suggested they take a train down to San Giovanni. He said he had always been sceptical about the frangrance of flowers that some stigmatics or saints had He kept thinking he was smelling some wonderful fragrant cologne while he met him. Later on the train back to Rome did he realize Padre Pio had the scent of flowers radiating from him.

7 posted on 09/23/2009 11:08:32 AM PDT by Citizen Soldier (Just got up from Bedroomshire)
[ Post Reply | Private Reply | To 2 | View Replies]
To: fatima
Wow!!! Thank you so much for posting the link to that story!!! I love Padre Pio but had never read that account before. Several of my HS classmates were from St.William the Abbot in Seaford.

There are similar stories with St. Charbel, including a woman on whom he 'operated' in the middle of the night. You can read them here. 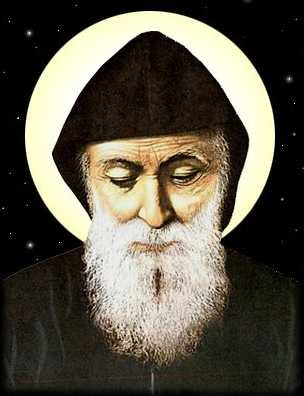 Like St. Pio, he was also a monk but lived as a hermit. He died on Christmas Eve, 1898, reciting the Father of Truth prayer.

(The Last Prayer of Saint Charbel before he died)

Here is your Son,

The sacrifice in which you are well pleased.

Accept him for he died for me.

So through him I shall be pardoned.

Here is the offering.

Take it from my hands

And so I shall be reconciled with you.

Remember not the sins that I have committed

In front of your Majesty.

Here is the blood which flowered on Golgotha

For my salvation and prays for me.

Out of consideration for this,

I have committed many sins

But your mercy is great.

If you put them in the balance,

Your goodness will have more weight

Than the most mighty mountains.

Look not upon my sins,

But rather on what is offered for them,

For the offering and the sacrifice

Are even greater than the offences.

Because I have sinned,

Your beloved bore the nails and the spear.

His sufferings are enough to satisfy you.

By them I shall live.

Glory be to the Father who sent His Son for us.

Adoration be to the Son who has freed us and ensured our salvation.

Blessed be he who by his love has given life to all.

To him be the glory.

from the Maronite Liturgy.

Padre Pio always welcomed American soldiers to San Giovanni Rotondo, the American chaplains used to bring them up to visit. He sometimes heard their confessions . . . even when they didn't speak Italian (and he didn't speak English). He said his Guardian Angel translated for him, and some of the soldiers said that was absolutely true . . . . he was indeed a remarkable man.

He had the gift of 'reading hearts' - he could discern a penitent's sins even before they confessed or when they omitted a sin. "Haven't you forgotten thus and so?" he would ask, and name the very sin they had forgotten.

There's also the story of Allied bomber pilots encountering a Franciscan priest flying in the air and diverting them from various targets . . . . but that's never been confirmed.

Thank you for posting these additional details. The stories surrounding St. Pio are filled with extraordinary gifts and charisms, yet he remained a simple and humble servant.

10 posted on 09/23/2009 5:26:24 PM PDT by NYer ( "One Who Prays Is Not Afraid; One Who Prays Is Never Alone"- Benedict XVI)
[ Post Reply | Private Reply | To 9 | View Replies]
To: NYer
What's interesting to me in this Year of the Priest is to see how these great saints gave such incredibly holy service as simple parish priests.

Of course, the Cure d'Ars is another one who spent long hours in the confessional, had wonderful holy gifts, and yet lived and died the pastor of a tiny parish in a small, humble French village.

Padre Pio, pray for us please.

What a beautiful prayer.Thanks for the info NYer.