The most famous priest in Brazil is Padre Marcelo Rossi -- and John Allen had a chance to experience one of his Masses. It sounds incredible: 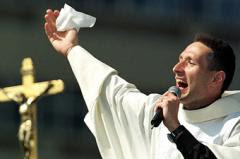 In some ways the Mass was like an emotional roller coaster ride, repeatedly building to a fevered crescendo, only to come back down for moments of deep reverence. People were respectful of the key moments, such as the proclamation of the gospel and the eucharistic prayers, but they also seemed to know when it felt right to send up a chant of "Hey, Hey, Hey, Jesus is King!" (which sounds much more lyrical in Portuguese) and when to offer raucous applause.

When it came time for the homily, Rossi first walked over to a glass partition on one side of the stage and leaned against it while he spoke; the effect was to suggest a chat between two friends at a bar, even though his "friend" in that moment was a throng of thousands. Later, he plopped down on the edge of the stage, and told a story illustrating something about charismatic worship. (He was trying to explain why charismatics lift their arms during prayer, and compared it to a small baby raising its arms for its parents. It's a humble gesture, he said, one of childlike simplicity.)

That point made, Rossi introduced a couple of his guests. To my surprise (and, I'm sure, that of virtually everyone else in attendance), I got top billing over a well-known player from one of São Paulo's professional soccer clubs. Also to my surprise, Rossi motioned for me to join him on stage. We linked arms and waved to the crowd to thunderous applause ... I felt for all the world like I had just accepted the vice-presidential nomination at a political convention.

Rossi explained that I was there to learn something about the community around the sanctuary, and he then asked all the women present to raise their hands, followed by all the men. (He was making the point that he gets an astonishingly high number of men by the usual Latin American standards of religious practice.) He next asked for all the babies, and hundreds of infants suddenly shot up into the air, held aloft by beaming parents.

Looking around, it was striking how diverse the crowd seemed -- by age, by gender, and by race, even by socio-economic status. Judging solely by the naked eye, it would be tough to pin down Rossi's target "demographic"; he seems to have a fairly universal appeal.

On impulse, Rossi then thrust the microphone into my hands, asking me to say a few words. In what will likely go down as the shortest speech of my career, I blurted out: Grazie e buona sera. (My theory was that I had a better shot at being understood in Italian than in English, since I don't speak a word of Portuguese. If nothing else, the crowd seemed to appreciate the brevity, sending me off with another hail of applause.)

The Mass proceeded, punctuated by the same alternating cycle of pop-music exuberance and deep reverence. At the end, Rossi and the priest with whom he concelebrated placed a large host into a gleaming monstrance.

All the lights were turned off as people lit small candles, producing a shimmering sea of light. As a haunting ballad played in the background, Rossi slowly came down from the stage and made the rounds of the hall, holding the monstrance aloft. It was the most spiritually evocative moment of the evening, with the vast crowd silently riveted on the monstrance as it followed its course back to the altar.

Bear in mind that this was by no means a special occasion. Mass is celebrated like this four days a week at the sanctuary, with three Masses on Sunday.

Hearing about all this second-hand, I suppose it's possible to look askance, regarding what I'm describing as more Lollapalooza than liturgy. In the moment, however, one can't help but sense a spirit that's incredibly powerful. In the first blush afterwards, my unreflective reaction, voiced to no one in particular, was: "There's a church that's alive!"

At the moment, work is underway on a gorgeous new sanctuary to replace the dilapidated factory, which will be named for Mary the Mother of God. (Word is that the nuncio in Brazil gently suggested to Bishop Fernando Figueiredo of the Santo Amaro diocese, where the site is located, that a sanctuary of the Latin Rite church named for the Byzantine Rosary probably doesn't make much sense). The new sanctuary will have a capacity of 60,000 inside, with room for another 40,000 outside. It's expected to be ready sometime in 2010.

When that happens, Catholics from other parts of the world might want to consider making the trip. Whether you're charismatic or not, whether you speak Portuguese or not, the experience is like Jolt Cola for the soul ... and every now and then, that really hits the spot.

While I cannot speak for all of us, I would imagine that the majority of Catholic freepers tend more towards traditionalism. For us, the Three Singing Irish Priests is more representative of how we view and practice our faith. However, we have also read enough threads in this forum, on how other christian communities are burrowing their way into the Catholic communities of South America. In deference to Padre Marcelo Rossi, sometimes it's necessary to fight fire with fire. And, yes, there are several YouTube videos. Here is one of him singing with the congregation.

May God bless him in his ministry!

It sounds terrific to me, but I’m already on the Latino-charismatic fringes anyway.

3 posted on 09/12/2009 5:25:46 PM PDT by Tax-chick ("This is our duty: to zot their sorry arses into the next time zone." ~ Admin Mod)
[ Post Reply | Private Reply | To 2 | View Replies]
To: NYer
The Mass proceeded, punctuated by the same alternating cycle of pop-music exuberance and deep reverence.

No thanks. Sounds like cult of personality and emphasis-on-man to me. I'll stick with the Catholic Mass and a nondescript but correct and reverent priest..

But not so far-out as Brazil, yet ;-). And our pastor is a bespectacled intellectual who more-or-less reads Spanish phonetically.

I prefer Masses where nobody notices who the priest is.

God has blessed us with a fine priest who consistently delivers intelligent and intelligible homilies which teach and inspire. But at the altar he disappears.

Amen, but we must remember that the Church has spoken clearly and repeatedly about the liturgy as an encounter with holy mystery, not our agitated emotions. Fr. Rossi's model of liturgi-tainment makes worship a personal achievement. There are plenty of ways this dynamic priest could use his energy to win souls for Christ outside the liturgy, so why should he take it upon himself to change liturgy to which the faithful are legally entitled? The message here is that it's because he knows better: he can exercise his private judgment because he's acting in obedience to a higher law. Haven't we heard all this before?

Sorry if this is snarky, but I wonder if he's been spotted on the beaches? He's something of a cutie, isn't he?

Media stardom has spoiled more than a few priests.

The Mass doesn’t need any of these theatrics! I HATE when Priests do these kinds of things....it seems so cultish.

11 posted on 09/14/2009 7:32:28 AM PDT by Ann Archy (Abortion....the Human Sacrifice to the god of Convenience.)
[ Post Reply | Private Reply | To 1 | View Replies]
To: Romulus
we must remember that the Church has spoken clearly and repeatedly about the liturgy as an encounter with holy mystery, not our agitated emotions. Fr. Rossi's model of liturgi-tainment makes worship a personal achievement.

Agreed! This is not a model that appeals to me either but I do acknowledge that in a country where Catholics are being pulled towards other churches, his approach is bringing them back. From the original article ...

At the moment, work is underway on a gorgeous new sanctuary to replace the dilapidated factory, which will be named for Mary the Mother of God. The new sanctuary will have a capacity of 60,000 inside, with room for another 40,000 outside. It's expected to be ready sometime in 2010.

Will this endure? Only God knows.

This is why the priest feels it necessary, I suspect:

Some folks wouldn’t like this type of worship, and I can understand that. But if the priest is faithful to the teachings of Jesus, and the Church, and he is truly reaching people, challenging them to live their Faith, I say more power to him!!