A voice is heard in Ramah, sobbing and loud lamentation; Rachel weeping for her children, and she would not be consoled, since they were no more. –Matt. 2:18 quoting Jer. 31:15

Simeon blessed them and said to Mary his mother, 'Behold, this child is destined for the fall and rise of many in Israel, and to be a sign that will be contradicted—and you yourself a sword will pierce—so that the thoughts of many hearts may be revealed.' –Luke 2:34-35 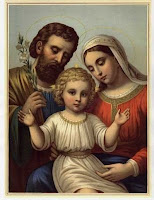 In the Catholic Church, each day's liturgy brings a different celebration or commemoration, either from the life of Christ or that of a saint or martyr who closely (and heroically) modeled their life after His. Now December 28th is usually reserved to recall the Holy Innocents, those infant boys murdered by Herod in his attempt to eliminate his new rival, the Christ Child. But since the 28th falls on a Sunday this year, this sad memorial is "trumped" (much like Christ's resurrection triumphs over His crucifixion) at Mass by this Sunday's Feast of The Holy Family, which remembers the blessed years Jesus, Mary and Joseph spent together as the Son of God grew up. Still, upon reflection, I saw that because of Obama's election, this year God had a plan for the two feasts' juxtapositions—and a message emanating from the two feasts falling on the same date in 2008. 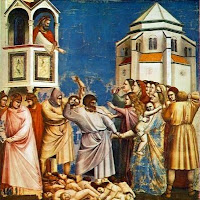 While I dealt in detail about the significance of the Feast of the Holy Innocents (who are depicted in Matt 2:16-18) in a previous post, their massacre could be looked upon as a small scale, 1st Century version of the mass-murder of the unborn (and, in some cases, already born) to be ordered by President-elect Obama in the 21st. On the other hand, The Feast of the Holy Family, which recalls a father, mother and Son who always lived with the proper measure of love, honor, obedience and respect toward one another, seems positively peaceful in comparison. But, lest you think Jesus, Mary and Joseph lived a type of Leave It To Beaver existence, the day's gospel passage (Luke 2:22-40) also includes Simeon's (who, along with the passage's 84-year-old prophetess Anna, just happen to be the sort of outspoken elders the Obama administration would love to euthanize) prophecy. In it this "righteous and devout" man predicts not only Christ's victory, but the immense suffering He and His mother would endure along the way. Still, as a Christian who doesn't believe in coincidences, a Catholic who believes everything happens for a reason (see Roman's 8:28), I think that God brought these two holy days together on the same date at the appointed time to prove a point. Namely, one is the antidote for the other.

Although Jesus lived in holy peace with His parents for a relatively long time, He also knew how to read the signs of the times, and did not hesitate to leave home when the time for His public ministry had arrived. Similarly, those of us who attempt to live our lives as modern-day holy families must also realize that the day Barack Obama (our "Great Friend" who is really nothing but a "myth" who "smiles and smiles, exuding sincerity as he speaks lies and death") got elected, was the day our family's peaceful co-existence ended. In other words, since the state has become so hell-bent on destroying the unborn, today's holy families are now the sole protectors of the modern holy innocents, and must rush to their aid even at the cost of position or reputation. For if you now forsake our place at the front lines of the abortion battle, we will soon find the enemy has broken our ranks, and is pursuing your children as well.

While he was plotting Christ's death, Caiaphas, the era's high priest, justified Jesus' execution by saying, "It is better for you that one man should die instead of the people, so that the whole nation may not perish" (John 12:49). Meanwhile, Obama, our current high priest does his predecessor one better, basically proclaiming, It is better for you (but really me) that many of the people should die so that The One can live as he desires. Today's scripture warns us to get off the fence now, lest we be thrown off, and find ourselves grappling with the goats instead of amidst the safety of the sheep, the gate either too narrow to enter or closed altogether when He comes again in glory.

December 28 - Feast of the Holy Innocents

The Feast of the Holy Family

The Holy Family vs. The Holy Innocents: A Christmas season reflection [Catholic Caucus]

Imitating the Holy Family; Four Traits that Make It Possible

Lots of Graphics: Post your favorite image of the St. Mary and Child, the Holy Family...