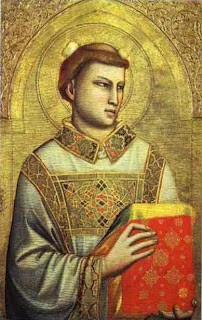 It was mid-January in 1989 and Lou Holtz and the Fighting Irish National Championship team had just finished the day in Washington, D.C., being honored by outgoing President Ronald Reagan. But after going to bed that night on top of the world, Coach Holtz was awakened at 3 a.m. the next morning with the news that Bobby Satterfield, the team's popular second string defensive back, had died of an unexpected heart attack.

Just as the sudden turn of events surely jolted Coach Holtz, the feast of St. Stephen, and the bloody story of the Church's first martyr's demise, startles many believers by falling on the day after the beautiful celebration of Christmas. But bloody as it is, Stephen's story, in its own way, is a thing of beauty too.

He Teaches Us to Love the Cross [St. Stepehen]

St. Stephen was a deacon in the early Church and was the first Christian martyred for his faith. He was one of the seven deacons who helped the apostles (Acts 6:1-6) and was "filled with faith and with the Holy Spirit," and was "full of fortitude" (Acts 6:5,8). Stephen died praying for his executioners. The similarities between Stephen's martyrdom and the crucifixion of Our Lord emphasize his imitation of Christ even unto the complete gift of self. His name is included in the Roman Canon.

Collect:
Lord,
today we celebrate the entrance of St. Stephen
into eternal glory.
He died praying for those who killed him.
Help us to imitate his goodness
and to love our enemies.
We ask this through our Lord Jesus Christ, Your Son,
who lives and reigns with You and the Holy Spirit,
one God, for ever and ever. +Amen.

First Reading: Acts 6:8-10;7:54-59
And Stephen, full of grace and power, did great wonders and signs among the people. Then some of those who belonged to the synagogue of the Freedmen (as it was called), and of the Cyrenians, and of the Alexandrians, and of those from Cilicia and Asia, arose and disputed with Stephen. But they could not withstand the wisdom and the Spirit with which he spoke.

Now when they heard these things they were enraged, and they ground their teeth against him. But he, full of the Holy Spirit, gazed into heaven and saw the glory of God, and Jesus standing at the right hand of God; and he said, "Behold, I see the heavens opened, and the Son of man standing at the right hand of God." But they cried out with a loud voice and stopped their ears and rushed together upon him. Then they cast him out of the city and stoned him; and the witnesses laid down their garments at the feet of a young man named Saul. And as they were stoning Stephen, he prayed, "Lord Jesus, receive my spirit."

Gospel Reading: Matthew 10:17-22
Beware of men; for they will deliver you up to councils, and flog you in their synagogues, and you will be dragged before governors and kings for my sake, to bear testimony before them and the Gentiles. When they deliver you up, do not be anxious how you are to speak or what you are to say; for what you are to say will be given to you in that hour; for it is not you who speak, but the Spirit of your Father speaking through you. Brother will deliver up brother to death, and the father his child, and children will rise against parents and have them put to death; and you will be hated by all for My name's sake. But he who endures to the end will be saved.

Stephen's name means crown. He was the first disciple of Jesus to receive the martyr's crown. Stephen was a deacon in the early Church. We read about him in chapters 6 and 7 of the Acts of the Apostles. Peter and the apostles had found that they needed helpers to look after the care of widows and the poor. So they ordained seven deacons. Stephen is the most famous of these.


God worked many miracles through St. Stephen. He spoke with such wisdom and grace that many of his hearers became followers of Jesus. The enemies of the Church of Jesus were furious to see how successful St. Stephen's preaching was. At last, they laid a plot for him. They could not answer his wise arguments, so they got men to lie about him. These men said that he had spoken sinfully against God. St. Stephen faced that great assembly of enemies without any fear. In fact, the Holy Bible says that his face looked like the face of an angel.
Stephen spoke about Jesus, showing that he is the Savior God had promised to send. He scolded his enemies for not having believed in Jesus. At that, they rose up in great anger and shouted at him. But Stephen looked up to heaven. He said that he saw the heavens opening and Jesus standing at the right hand of God. His hearers plugged their ears and refused to listen to another word. They dragged St. Stephen outside the city of Jerusalem and stoned him to death. The saint prayed, "Lord Jesus, receive my spirit!" Then he fell to his knees and begged God not to punish his enemies for killing him. After such an expression of love, the martyr went to his heavenly reward.

"The love that brought Christ from heaven to earth raised Stephen from earth to heaven.. Christ made love the stairway that would enable all Christians to climb to heaven. Hold fast to it, therefore, in all sincerity, give one another practical proof of it, and by your progress in it, make your ascent together." -St. Fulgentius