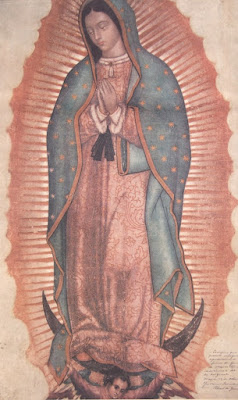 This is indeed a difficult blog to write. Not only because my favorite book on the subject went missing, but I believe, if I write this story just right, millions of souls will convert to Christ ...

Blessings to all during this Advent season.

3 posted on 12/11/2008 7:32:43 PM PST by the invisib1e hand (appeasement is collaboration.)
[ Post Reply | Private Reply | To 2 | View Replies]
To: mlizzy
"That's fantasy!" you may say, and yet that is EXACTLY what happened when Our Lady of Guadalupe first appeared. It happened in Mexico in December of 1531. Many Catholics have heard the story of how Mary suddenly appeared to the poor peasant Juan Diego on his way to daily Mass. Juan had already converted to Catholicism, and yet Her appearance, Her promise of protection for his people, and Her plea to go to the bishop and ask a Church be built on this spot, certainly seemed utterly fantastic to him. It must have seemed utterly fantastic to Bishop Juan de Zamorraga too, for he asked Diego to go back to Her and ask for a sign.

And what a sign it was! Originally Juan thought that sign was a bouquet of roses (which could not have bloomed in that winter climate) that Our Lady presented Juan with. Yet as beautiful as they were, the roses were a minor miracle compared to what happened next, when Juan opened his cloak (which was protecting the flowers) to the bishop.

For as Juan handed Zamorraga the flowers, the stunned bishop saw that Juan's cloak was now covered with a miraculous image of the Virgin. While St. Thomas Aquinas correctly called the Holy Eucharist "the perfect art, for it is exactly what it represents," this image of the Virgin could be a close second. For this image of Mary (appearing as a pregnant native woman) is far more than meets the eye. It is a miracle to the Nth degree.

The image (which is said to be the chief instrument in the conversion of upwards of ten million Aztecs) appeared on a cheap cloth, which should have totally disintegrated after 100 years, yet is still as vibrant on its 475th anniversary as it was then. Its pigment is neither paint nor photographic material; in fact, the image has been rendered with a substance that experts say is found nowhere on earth. While books as scholarly as Butler's Lives ignorantly suggest it could have been painted, this is contracted by every reputable scientist, including those who have recently discovered microscopic images of two men (presumed to be the bishop and his assistant) reflected in Her eyes in the manner of a photograph—something a 16th century artist could not have painted nor would have even known existed. Clearly everything about this image defies natural explanation.

Indeed there are few events (outside of Christ's Resurrection) in history that have changed the world as much as this Marian appearance. Not only did it convert millions of Mexicans, it saved millions of babies, for up until then, the Aztecs sacrificed their youth to their "gods." Plus, while nearly half of Europe was leaving the Church, falling prey to the half truths of Luther, Calvin and the rest, Mary's miracle served to actually increase the Catholic population at the time—not to mention serve as inspiration to the counter-reformers such as Ignatius of Loyola, Teresa of Avila, and Charles Borremeo, who eventually brought half of these lost souls back. Plus it salvaged the relations between Spanish conquistadors and the natives, for their conquest of the Aztecs had been so brutal, there were few like Juan Diego who took their "Religion" seriously until Her appearance.

But as much as Our Lady of Guadalupe was needed then, She is just as necessary today. Millions of Americans are STILL killing their babies (through abortion) and the "Queen of Mexico and Empress of the Americas" (as Pius XII named Her) must again be called upon to save them. Europe (and the United States) is again falling—not to Luther and Calvin, but Secularism and Relativism, and She needs to inspire more modern counter-reformers to stem the devilish tide. Finally as millions of Mexicans immigrate (illegally) into our country and the relations between the two populations is at an all-time low, Our Lady of Guadalupe is needed to intercede to find a peaceful solution to this volatile situation.

Our Lady of Guadalupe, Pray for Us!