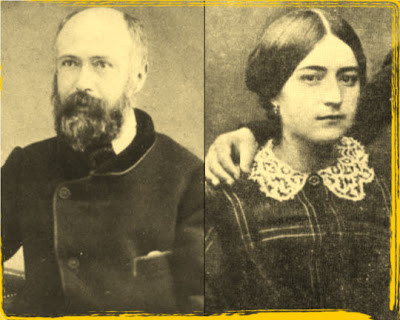 On this Sunday dedicated to the missions, the parents of the patroness of missionaries -- the "Little Flower" Therese of Lisieux -- were beatified together this morning at their daughter's French shrine.

Noting the "paucity of lay saints -- more specifically, married ones," one Therese devotee welcomes Louis and Zélie Martin to the ranks of the blessed... in the pages of the Wall Street Journal:


After their wedding in Alençon, France, on July 13, 1858, Louis Martin and Zélie Guérin refrained from sex for 10 months. The impetus for that arrangement, known as a "Josephite marriage" (after the celibate relationship between St. Joseph and his wife, Mary), came from Louis, who had earlier hoped to enter a monastery. Eventually, a frustrated Zélie escorted her husband to a local priest, who assured them that raising children was a sacred activity....

This Sunday in the basilica of Lisieux, Louis and Zélie will be beatified, the Catholic church's final step before canonization, positioning them to join the rarefied company of saints who were married. That brief list includes Saints Peter, Monica, Thomas More and the American-born Elizabeth Ann Seton. The roster of saints married to one another is even shorter: Isadore and Maria, 10th-century Spanish farmers, are among the few.

The Lisieux ceremony follows the Vatican's approval, in July, of the required miracle -- the healing of a man with a malformation of the lung. But the beatification raises questions about the models of life being presented to Catholics. What can a man and woman who planned to live celibately say to married couples today?

The two traditional roles of the saints are the patron (who intercedes on behalf of those on earth) and the companion (who provides believers with an example of Christian life). And the paucity of lay saints -- more specifically, married ones -- in the roster is somewhat embarrassing.

Two reasons underlie this anomaly: the outmoded belief, almost as old as the church, that the celibate life was "better" than married life, and the fact that the church's canonization process is an arduous one, requiring someone to gather paperwork, interview contemporaries if that is still possible and present the case to the Congregation for the Causes of Saints.

Certainly there have been as many saintly wives and husbands as there have been holy priests and nuns. But religious orders and dioceses know how to navigate the canonization procedures on behalf of bishops, priests, brothers and sisters. By contrast, how many families have the resources to embark on the decades-long process on behalf of even the holiest mother or father? As a result, married Catholics have few exemplars other than Mary and Joseph, whose situation was hardly replicable.

Since the Second Vatican Council, which emphasized the "universal call to holiness," Rome has stepped up its efforts to canonize more lay and married people. The Vatican hopes to expand the "calendar of saints" beyond those who sport miters, collars and veils in order to provide Catholics with lives that they can emulate, not simply admire. But do Louis and Zélie fit the bill?

No one doubts that the Martins led the traditional life of "heroic sanctity" required for sainthood. Though obviously biased, St. Thérèse wrote: "The Good God gave me a father and mother more worthy of heaven than of earth." They were devoted to one another, to their children and to their faith. During their first year of marriage, the couple took into their home a young boy whose mother had died. And whenever Louis and Zélie were apart, they exchanged the tenderest of letters. "Your husband and true friend who loves you forever," Louis wrote.

One lesson that believers might take from the new "blesseds" is that sanctity comes in many styles. If it were up to their youthful selves, neither would have married: Zélie wanted to be a nun as much as Louis hoped to be a monk. After setting aside their celibacy, they provided a warm home for their children, five of whom fulfilled their parents' thwarted hopes for life in a religious order. The wife died early; the grieving husband struggled with mental illness, including hallucinations in which he saw "frightful things," according to his daughter Céline.

Throughout their complicated lives Blessed Louis and Zélie Martin tried to love as best they could, something that is still relevant -- and not just to married couples. And whose life, and which saint's life, is "typical" anyway? Holiness, as the lives of the saints remind us, always makes its home in humanity.

Elsewhere, the folks at the Good Deacon's place got the scoop on the new blesseds as their Sunday homily... and even TIME gets into the act with a package of the "Top 10" -- OK, 12 -- causes in the pipeline.

That would be a truly rare blessing in today's society. May these blesseds serve as role models for all those who are seeking a holy life as husband and wife.

Not perfect parents but saintly ones.

I know there was a thread about when they were announced “Venerable”, but with the search function so messed up I cannot find it. Bah!

4 posted on 10/19/2008 5:12:30 PM PDT by Salvation ( Â†With God all things are possible.Â†)
[ Post Reply | Private Reply | To 2 | View Replies]
To: Salvation
After their wedding in Alençon, France, on July 13, 1858, Louis Martin and Zélie Guérin refrained from sex for 10 months. The impetus for that arrangement, known as a "Josephite marriage" (after the celibate relationship between St. Joseph and his wife, Mary), came from Louis, who had earlier hoped to enter a monastery. Eventually, a frustrated Zélie escorted her husband to a local priest, who assured them that raising children was a sacred activity....

There is an article in Social History of Medicine, about the terminal illness of Zelie Martin - it is called "Purgatory on Earth." The historian points out that there was nothing odd in delaying the consumation of a marriage for up to a year. It was quite common to "gradually establish intimacy", as during that era marriages were essentially arranged - Zelie and Louis had only a few formal meetings before the wedding.

The visit to the priest is speculation - it has been repeated as fact in many accounts but is not supported by any letter or document from the period - and the family has a voluminious correspondence. Basically, Louis and Zelie lived together for some months before beginning sexual relations. It is unlikely, in fact, that Louis intended never to do so - he understood the church's teaching on marriage.

Blessed Louis and Zélie Martin, pray for us!

This morning, for the first time in the history of the Church: a married couple, the parents of a daughter who is a saint and a Doctor of the Church, were beatified in Lisieux, France. 15000 faithful attended the celebration. Louis and Zélie Martin were not beatified because of Saint Thérèse of the Child Jesus and of the Holy Face. They were beatified in recognition of the virtue and holiness displayed, by the grace of Christ, in their own life. Two months before her death, Saint Thérèse wrote to the Abbé Bellière: "God gave me a father and a mother more worthy of heaven than of earth; they asked the Lord to give them many children and to let them all be consecrated to Him." (July 26th, 1897).

The Challenges of Life

The Martins had nine children, four of whom died in infancy. Of their five daughters, one of them -- Léonie -- was a very difficult child, furrowed by the emotional complexities that would follow her even into adulthood.

Louis, a watch and clock maker and Zélie, an expert artisan of lace, operated their own businesses. They were familiar with the challenges inherent in dealing justly and patiently with employees and with customers. In the Martin household the needs of the poor were never forgotten.

Both Louis and Zélie were stricken by disease. Zélie died of breast cancer on August 28, 1877. Louis, a widower with five dependent children, was afflicted with a humiliating brain disease and confined in a psychiatric hospital. During occasional periods of remission, he devoted himself to his fellow patients. He died at home in 1894 at the age of 71.

Les Bienheureux Monsieur et Madame Martin prove to married couples that a great holiness is possible, even in the midst of a family life marked by difficulties and sorrows.