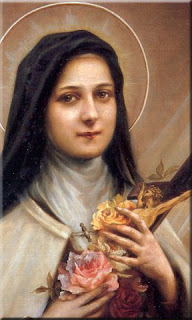 Of all the heavenly host, few have captivated the popular mind as Therese of the Child Jesus -- the "Little Flower," whose feast is today.


Though her spirituality is derided by some contemporary Catholics for being saccharine and sentimental, her "little way" of doing small things with great love holds enormous appeal to millions of believers, who find in Therese a companionable presence. She is arguably the most popular of all modern-day saints, beloved by people as diverse as Mother Teresa, Dorothy Day (who penned a moving book about her), Pope John Paul I (who called her a "steel bar," for her resolve) and John Paul II. Here is my favorite of passage from her autobiography, "The Story of a Soul." Using the image of the garden, she reminds us that all of us are loved by God in our marvelous particularity:


"Jesus deigned to teach me this mystery. He set before me the book of nature; I understood how all the flowers He has created are beautiful, how the splendor of the rose and the whiteness of the Lily do not take away the perfume of the little violet or the delightful simplicity of the daisy. I understood that if all flowers wanted to be roses, nature would lose her springtime beauty, and the fields would no longer be decked out with little wild flowers. And so it is in the world of souls, Jesus' garden. He willed to create great souls comparable to lilies and roses, but He has created smaller ones and these must be content to be daisies or violets destined to give joy to God's glances when He looks down at His feet. Perfection consists in doing His will, in being what He wills us to be."

...and, again noting Therese's "signature" sign -- the rose -- a Beliefnet scribe movingly recounts how, thanks to several "showers" of them along the way, she "owe[s her] life" to the Little Flower:


I was ten years old when I first witnessed the power of St. Therese's novena, in the form of a literal shower of the roses she had promised. Named after the Little Flower myself, I could see my mother grasping for something that would heal the wound inside her when my father left. She went to prayer group once a week, said a rosary every morning, and hung an image of the Sacred Heart of Jesus in our kitchen.

But I especially remember her novena prayer to St. Therese: "St. Therese, the Little Flower, please pick me a rose from the heavenly garden and send it to me with a message of love. Ask God to grant me the favor I thee implore [state intention here], and tell him I will love him each day more and more." Tradition holds that if you say the novena prayer, followed by five Our Fathers, five Hail Marys, and five Glory Be's each day for five days, you will receive a shower of roses on the fifth day.

Around the time my dad left, I knew my mom was particularly desperate and in need of a sign from heaven that she could raise her four daughters by herself, despite her hurt. On the fifth day of her novena, our neighbor Mr. Miller, who kept an impeccable garden, was pruning his rose bushes. As he trimmed off the fully blossomed flowers to make room for the tender buds, he noticed my twin sister playing soccer in the backyard.

"Give these to your mom," he said. There must have been eight dozen roses of all different shades. With the skill of an artist, my sister went back and forth, from his garden to our kitchen, arranging all the roses until she ran out of vases and counter space.

Later, my mom came into the kitchen exhausted from a long day's work to find what looked and smelled like a rose garden on our kitchen counter. Remembering it was the fifth day of her novena, she cried tears of hope.

The Little Flower's petals have fallen onto my path at every major milestone in my life when I've begged her for a sign that I was headed in the right direction. In high school, when I decided to give up booze, a florist came to the door with three red roses sent by my religion teacher, who knew I was struggling with alcohol. When I freaked out three weeks before my wedding, my mom called to tell me that the rose bush I had planted in her front yard, which had produced only three or four buds in the last five years, was blossoming with over two hundred roses. And when I went into premature labor with my second child, I received so many roses dropped off by visitors that my husband and I named our baby Katherine Rose.

...and at the Bench, the good deacon leads with another blossom:


"Charity gave me the key to my vocation. I understood that the Church being a body composed of different members, the most essential, the most noble of all the organs would not be wanting to her; I understood that the Church has a heart and that this heart is burning with love; that it is love alone which makes the members work, that if love were to die away apostles would no longer preach the Gospel, martyrs would refuse to shed their blood. I understood that love comprises all vocations, that love is everything, that it embraces all times and all places because it is eternal!"

Later this month, Therese's parents will be beatified. Slated to take place at their daughter's shrine at Lisieux, the 19 October rites for Louis and Zelie Guerin Martin will coincide with Mission Sunday -- the same day when, in 1997, Therese became the second woman declared a Doctor of the Church.

Such inspiring stories!! St. Therese often said she wanted to spend her time in heaven helping those on earth. Please post your stories of St. Therese.

St. Therese and Her Little Way

New Film on the Life of St. Thèrése of Lisieux Screened for the Roman Curia

Today we remember the Little Flower

St. Therese and the Little Way

Benedict XVI Welcomes Relics of St. Thérèse - Urges Faithful to Love Scripture as She Did

The Christmas Conversion of St. Thérèse

"A Shower of Roses" [Catholic Caucus]

I have said over the years many novenas to St. Theresa many of them for my husband. He was expected to die 20 yrs. before he actually did. He pulled through so many extremely critical medical emergencies. He lived long enough to see our youngest son graduate from college. I passed along my prayer cards to friends over the years who seemed to have insurmountable problems and they all felt St. Theresa helped them through these. Although my husband died before our son married and had children his first daughter carries her name.

5 posted on 09/29/2009 8:29:44 PM PDT by mimaw
[ Post Reply | Private Reply | To 2 | View Replies]
To: mimaw
Thank you for sharing those stories on this thread. Earlier this year, after reading the story of St. Therese, I clicked on a favorite blog and this image greeted me. 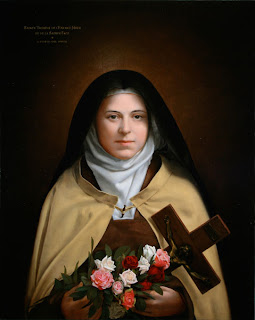 I purchased the Leonard Porter print, had it beautifully matted and framed and it now hangs over the mantle in the Living Room.