VATICAN CITY, SEPT. 10, 2008 (Zenit.org).- Benedict XVI will pray at the feet of Our Lady of Lourdes for the Church, the sick and for peace in the world when he visits the Marian shrine this weekend.

The Pope said this at the end of today's general audience in a message directed to the people of France. The Pope will travel Friday-Monday to Paris and Lourdes. His visit to the Marian shrine takes place in the context of the 150th anniversary of apparitions of Our Lady to Bernadette Soubirous.

"I go as a messenger of peace and fraternity," he said in the message. "Your country is not unknown to me. On several occasions I have had the joy to visit it and to appreciate its generous tradition of hospitality and tolerance, as well as the solidity of its Christian faith and its lofty human and spiritual culture."

The Pontiff underlined that he is traveling to France to visit Lourdes as a pilgrim: "After visiting Paris, your country's capital, I will have the great joy to join the crowd of pilgrims who are going to follow the stages of the jubilee journey, after St. Bernadette, to the Massabielle grotto.

"My prayer will intensify at the feet of Our Lady for the intentions of the whole Church, in particular for the sick, the abandoned, as well as for peace in the world."

"May Mary be for all of you," he added, "in particular for young people, the Mother always attentive to the needs of her children, a light of hope that illuminates and guides your ways."

"I invite you to join me in prayer," the Holy Father said, "so that this trip will bring abundant fruits." OUR LADY OF LOURDES

Our Lady appeared 18 times to Bernadette Soubirous, a young poor and sick girl in the grotto of Masabielle, close to Lourdes in France in 1858.

She asked for a chapel to be built in the site of the apparitions and when asked who she was, She replied : " I am the Immaculate Conception "

Our Lady asked Bernadette to wash her face at the fountain but there was no fountain there, so Bernadette dug a hole in the ground, and with muddy water washed her face while people ridiculed her, however from there sprang the famous fountain of water that has healing attributes. Many sick people have bathed themselves in that water and there have been at least 64 reported miraculous healings.

Millions of people from all over the world go to Lourdes yearly in the hope of obtaining help from the generous Mother of God.

Bernadette became a nun, she died when she was 35 and her body is still incorrupt.

The feast of Our Lady of Lourdes is February 11, which is also the birthday of Sarah Palin! 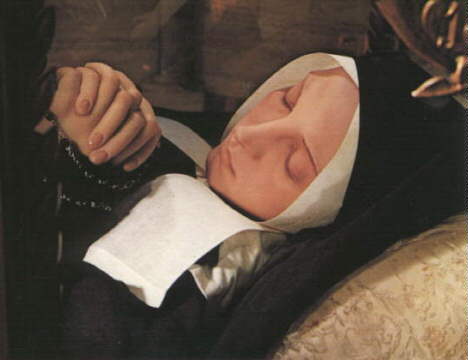 I noticed her birthday, too. Good idea.

Maybe Our Lady of Lourdes will use Sarah Palin to help heal our country from the sin of abortion.

Thank you for this post, NYer. I have the most beautiful statue of Our Lady of Lourdes - I just love Her.

I have a good friend who’s son was healed of a terrible (incurable) skin disease at Lourdes. Their story is amazing.

I am praying for her to intercede for Sarah Palin and her family. God bless our Holy Father, too.

Since this is a caucus, it would be very ill-mannered of me to mention (Joe + Moroni) or (Mo + “Gabriel”).

Dumb question: did she really wear nail polish or am I just an idiot?

I have read that the lady as first described by Bernardette did not look like the imagae we know, but had the form of a young, noble girl. She was badgered into saying that it looked like a traditional image of the Virgin.

The darkness throughout the world is really getting noticeable.

Prayer is the only thing that will save us.

Jesus is the light of the world. He will never be overcome. We should never despair and never lose faith. Every time and generation has known suffering, ours is no different. Be not afraid.

Thank you for posting this! My mother had a particular devotion to Our Lady of Lourdes, a devotion she shared with me. I’m thrilled that Pope Benedict has chosen a pilgrimage to Lourdes.