The meeting at Monson's office in the LDS Church Administration Building in downtown Salt Lake City began around 8:30 a.m. At about 9:40 a.m., Bush's motorcade emerged from underground parking on North Temple and headed straight for the airport.

The courtesy call was Bush's first meeting with Monson and his two counselors, Henry B. Eyring and Dieter President Bush waves as he disembarks Marine One Thursday in Salt Lake City for a meeting with Mormon church leaders. The president visited Utah for two fundraisers Wednesday on behalf of Republican presidential candidate Sen. John McCain, R-Ariz. (Douglas C. Pizac/The Associated Press)F. Uchtdorf, since they were installed in February after the death of President Gordon B. Hinckley.

Monson, who was first counselor to Hinckley in the governing First Presidency of The Church of Jesus Christ of Latter-day Saints, was present during 2005 and 2006 meetings between Bush and Mormon leaders. In 2002, Monson joined Hinckley in greeting Bush before he attended the opening ceremonies of the Winter Olympic Games.

On Wednesday, Monson, Uchtdorf and Julie B. Beck, general president of the church's women's Relief Society, got a personal tour of Air Force One. "He meets with [the First Presidency] regularly and thinks that they have a good role to play in America, in terms of spreading the word of love," Perino said Wednesday. "I don't think the president would ever pass up an opportunity to meet with the president of the Mormon church." pstack@sltrib.com

TOPICS: General Discusssion; Religion & Culture
KEYWORDS: bush; conspiracy; cuespookymusic; handshake; lds; mormon Navigation: use the links below to view more comments.
first 1-20, 21-40, 41-60, 61-80 ... 181-195 next last
Rather noteworthy article, not so much in content, but the manner in which they are shaking hands, which I believe is a secret handshake

Thanks to the freeper who brought it to my attention

Id like the discussion to address the handshake specifically, and what role this greeting has in the LDS culture

Open threads are a town square – posters may argue for or against beliefs of any kind. They may tear down other's beliefs. They may ridicule, similar to the Smoky Backroom with the exception that a poster must never “make it personal.” Reading minds and attributing motives are forms of “making it personal.” Thin-skinned posters will be booted from “open” threads because in the town square, they are the disrupters.

Its not often you see a head of state performing a secret handshake.

In that spirit, I hope the mod is open minded enough to allow this thread to stand, as Bush’s actions and activities warrant free and open discussion

4 posted on 05/30/2008 4:41:31 PM PDT by Revelation 911
[ Post Reply | Private Reply | To 3 | View Replies]
To: Revelation 911
Personally I like the President but sometimes his need to get along just irks me to death. It is another example of him being sucked into acceptance of another cult.

What's next a meeting with ron l hubbard (through Tom Cruse) and a discussion of Scientology?

In case you are wondering: liberal democrats, islam and lds.

HAHAHAH It's a conspiracy! GWB is actually a secret Mormon and the hand shake proves it!

Oh wait what's that? It's just a handshake? Well one of the shakers is a Mormon so it must be a secret one of some form that somehow GWB knows!

You should have paid more attention to editing the text than watching the handshake. It barely makes sense.

Notice the Similarity with Masonic? (Video)

editing or the writing itself - agreed

but hey - if it makes you feel better about whats happening or helps you process the unspoken ramifications, have at it

islam= wants you converted or killed
liberal democrats= enablers of the above
lds= reliable conservative voters???????????????

I was talking about the going along to get along regardless if a group is a cult or not IE liberals, islam, scientology, lds, and etc.

I’m just wondering why there would be a handshake like this, whatever the origin, in a public meeting with a religious leader where it can be noticed.

How do you know it isn’t a Skull and Bones society handshake? Or a private joke between them? Or just a handshake? You really need a tinfoil hat!

That is really weird! 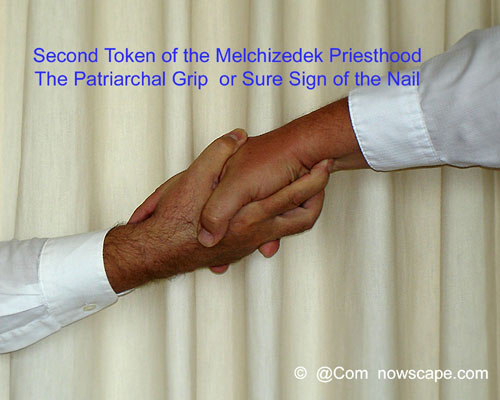 I have never noticed W giving that handshake to anyone else.

It would be interesting to see if he has given the same handshake to Mitt Romney or Harry Reid or Orrin Hatch.