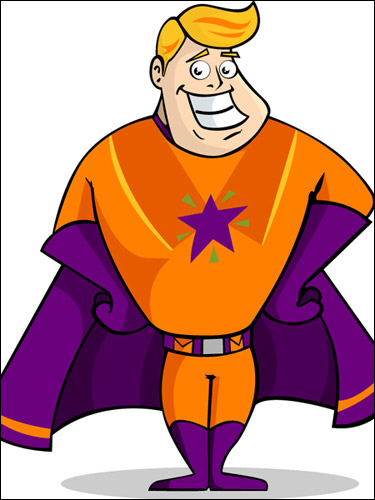 Is it a bird? Is it a plane? No it's... Diamond Dan - the Orange Order's new superhero.

He was first introduced to the public in November when a competition was launched in Northern Ireland to find a name for him.

The Order hopes the new character will help win over a new generation of members.

A special committee was set up to select the winning name out of more than 120 different suggestions.

The winning entry was put forward by Steven Mitchell, a primary school pupil from Lisburn.

David Hume, the Orange Order's director of services, said they were delighted with the response to the competition.

"There were many strong entries such as Sash Gordon, Sashman and the Boyne Wonder," he said.

"We picked Diamond Dan the Orangeman for a number of reasons.

"The name Diamond Dan has resonance going back more than 200 years to the formation of the Institution at the Diamond, Loughall, in 1795. Dan Winter was one of the founding fathers of the Order.

"It will raise questions which we can answer as part of our education outreach and explanation of our history.

"And of course, apart from the historical aspect of the name, it has a good ring to it."

The origins of the Orange Order date from the 17th century battle for the British throne between the Protestant William of Orange and the Catholic King James II.

Orange marches take place on 12 July to commemorate William's final victory over James at the Battle of the Boyne in 1690.

A superhero for a bigotted gang like the Orangemen? Classy.

I found it better to say nothing. I am definitely not a fan. I definitely remember my visit to Derry and seeing the wall murals for the Ulster Volunteer Force and Celebrating the Battle of the Boyne.

Whatever next? “Secret Stan, Knight of the Klan”? “Kapitan Kurt the Brown Shirt?” or how ‘bout “Vladivar the Commissar?”

No bowler? No rolled ‘brolly?

Yes I was going to suggest Hatefull Bigotman but you beat me too it.