TOPICS: Current Events; Mainline Protestant
KEYWORDS: akinola; anglican
Grace and peace to you from God our Father and our One and Only Saviour Jesus, the Christ.

I write on the 490th anniversary of that moment in Church history when Martin Luther nailed his 95 theses to the door of the Cathedral in Wittenberg in which he asserted, among other things, that the truth of the gospel must always take precedence over the structures of the church. It is becoming increasingly clear that we are facing a similar situation today. While it has been my hope that we would be able to share these reflections face to face it seems unlikely that we will be called to meet together in the near future and so I offer these thoughts by letter.

It has been repeatedly stated and most succinctly summarized in the report, ‘Road to Lambeth’ we face a two fold crisis in the Anglican Communion: a crisis of doctrine and a crisis of leadership, in which the failure of the “Instruments” of the Communion to exercise discipline has called into question the viability of the Anglican Communion as a united Christian body under the common foundation of faith. (See the Chicago-Lambeth Quadrilateral)

The Church of Nigeria is not interested in territorial expansion. The failure to resolve these dual crises has been at the heart of the decision by our Church and a number of other Global South Provinces to offer encouragement and oversight to a growing number of clergy and congregations in the USA. These pastoral initiatives are not and should not be seen as the cause of the crises.

Although they have variously been described as “interventions” “boundary crossing” or “incursions”—they are a direct and natural consequence of the decision by The Episcopal Church (TEC) to follow the path that it has now chosen.

These pastoral initiatives undertaken to keep faithful Anglicans within our Anglican family has been at a considerable cost of crucial resources to our province. There is no moral equivalence between them and the actions taken by TEC. They are a heartfelt response to cries for help. We acted in accordance with the Gospel mandate. Had TEC, against all godly warnings, not taken actions that tore the fabric of our beloved Communion there would be no need for hundreds indeed, thousands of its members to seek pastoral, episcopal and now primatial care elsewhere.

It has been suggested that our actions violate historic Anglican polity and early church tradition with particular reference made to the Council of Nicea. This assertion is both hollow and made in bad faith since those who make it are more than willing to ignore historic biblical teaching on the uniqueness of Christ, the authority of the Scriptures and the call to moral obedience. With regard to Nicea - while there was concern for proper order there was even greater commitment to maintaining right teaching. This can be seen by the provision of godly bishops and clergy in places where the incumbents were proponents of false teaching.

The world needs to understand that the situation that we now confront is not primarily about structure or conferences but about irreconcilable truth claims. It is worth remembering that in the Biblical narratives religious structures have often been the enemy of revealed truth. When these structures become obstacles, YHWH, in his own way and at a time of his own choosing removed them and brought His people back to Himself. Of course there is value to preserving Anglican structures but we must never do so at the expense of the people for whom our Lord Jesus the Christ gave his life.

Until the Communion summons the courage to tackle that issue headlong and resolve it we can do no other than provide for those who cry out to us. It is our earnest prayer that repentance and reconciliation will make this a temporary arrangement. One thing is clear we will not abandon our friends.

When we met in Dar es Salaam, after a great deal of effort, we suggested a way forward that had the support of all those present – including the Presiding Bishop of TEC. The House of Bishops and Executive Committee of The Episcopal Church quickly rejected this proposal on the grounds that it apparently violated their canons. We now have a counter proposal from TEC and yet there is no indication that it will meet the needs of those for whom it is supposedly designed. This endless series of proposals and counter proposals continues with no apparent conclusion in sight. Sadly, it is becoming increasingly clear that the only acceptable end as far as TEC is concerned is the full capitulation of any who would stand in opposition to their biblically incompatible innovations- this we will never do. There is a way forward - we have written and spoken repeatedly about it – the time for action is now.

I believe that we Primates must meet in the next few months to respond to the crisis that now confronts us. The situation in The Episcopal Church is deteriorating rapidly. Lawsuits are escalating and I have just heard that Bishop Bob Duncan is now threatened with ecclesiastical trial by the Presiding Bishop for his faithful attempts to find a way to protect his faithful members and diocese. Other godly bishops are under the same threat. Their only crime is a desire to continue their Christian pilgrimage as faithful Anglicans. This situation will affect all of us. We dare not let our love for the historic structures of our beloved Communion, important as they are, allow us to destroy its future. We are losing members. We are losing time. We are losing our integrity as an important part of the One, holy Catholic and Apostolic Church.

FReepmail Huber or sionnsar if you want on or off this moderately high-volume ping list (sometimes 3-9 pings/day).
This list is pinged by Huber and sionnsar. 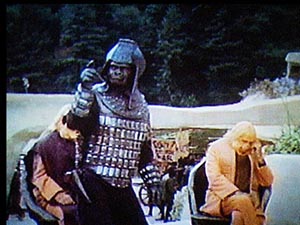 I think it’s another “primates” joke.

I thought even the bleached bones of that dead horse “primates” joke were by now long reduced to dust.

Guess we best not monkey around with this....

In all seriousness, terrific letter by our own age’s Athanasius, eh?

Yes. I like the fact that he doesn't beat around the bush and just talks straight, unlike the obfuscaters in the TEC. And he hits the nail on the head when he talks about the supremacy of doctrine over structure. At one point, Gene Robinson was talking about "wiggle room" which might allow the TEC to get around the clear intentions of the Primates' resolutions - like what is TEC, an institution of lawyers and bureaucrats or a religion? (Rhetorical question.)

Abp. Akinola is wonderful. He’s what a shepherd of souls should be.