NEW LONDON, Conn. (Catholic Online) – Miracles, bilocation, wounds that bled like Christ’s – none of these amazed the Capuchin Friars who dined, laughed and worked with the Capuchin saint internationally known as Padre Pio. Canonized on June 16, 2002, Padre Pio impressed his brother monks not with mystical feats but with intensive prayer habits and a Christian example.

“When he prayed, Padre Pio’s face looked like an angel’s,” said Brother Alessio Parente. “He would have conversations with God, just like you and I are doing right now.”

Padre Pio’s deep conversations with God were remarkable, said Kathleen Stauffer, publisher of Catholic Digest, based here, and author of the newly released book Padre Pio, An intimate portrait of a saint through the eyes of his friends. “All the men who knew Pio told me the same thing.”

“The stigmata was an incredible mystery, but the brothers who lived with St. Pio were almost fearful that people might obsess about that and overlook the real miracle of Pio’s legacy: an incredibly deep prayer life and a remarkably intimate relationship with God,” she said.

In the book’s introduction, Stauffer recounts a conversation with the late Brother Martin, who voiced fears that people would reduce Padre Pio’s legacy to finding lost items and intervening for miracles. Brother Martin told Stauffer this would be tragic. He then revealed a secret about Pio.

Now, some 15 years later, Stauffer revisited a story initially told in Catholic Digest magazine. With updated information and supplemental material never before published, she takes a closer look at the mystery of stigmata through the eyewitness accounts of the monks who knew Pio best. And, she wrestles with the dilemma of whether the secret revealed by Martin should at long last be told.

“There is real holiness in the world,” Stauffer writes in Padre Pio, “but I don’t think the world is a holier place now than it was 15 years ago.”

The saint was born in 1887, named Francesco in honor of St. Francis of Assisi, to Giuseppa and Grazio Forgione in the small Italian village of Pietrelcina. After becoming a Capuchin novice at the age of 16, he was ordained to the priesthood in 1910 and became known as Padre Pio.

On Sept. 20, 1918, Padre Pio was kneeling in front of a large crucifix when he received the visible marks of the crucifixion, making him the first stigmatized priest in the history of church. The doctor who examined Padre Pio could not find any natural cause for the wounds.

Upon his death at 81 on Sept. 23, 1968, the wounds were no longer visible. In fact, there was no scaring and the skin was completely renewed. He had predicted 50 years prior that upon his death, the wounds would heal. The wounds of the stigmata were not the only mystical phenomenon experienced by Padre Pio.

The blood from the stigmata had an odor described by many as similar to that of perfume or flowers, and the gift of bilocation was attributed to him. Padre Pio worked to use the confessional to bring penitents, whose confessions he heard for 10 or 12 hours per day, closer to God.

“The life and mission of Padre Pio prove that difficulties and sorrows, if accepted out of love, are transformed into a privileged way of holiness, which opens onto the horizons of a greater good, known only to the Lord,” Pope John Paul II said in his homily at the saint’s canonization five years ago.

The 72-page book, published by Twenty-Third Publications and Catholic Digest, offers a behind-the-scenes human exploration of holiness, bringing forth first-hand accounts rarely revealed while shedding light of the spiritual mysteries of stigmata. Stauffer looks at, among other questions, what happens at the dramatic intersection of daily life and the divine, what does the wet blood of stigmata feel like upon one’s lips, whether science can explain stigmata, whether a saint can have a sense of humor, and what is a relic.

“I grew up in a rural part of southeastern Pennsylvania,” Stauffer said. “There were tensions between fundamentalist Protestants and Catholics, sometimes, with Catholics being called out to defend our saints, our sacraments, our symbols. All too often, we were unprepared.”

“It’s kind of ironic that the National Centre for Padre Pio is now located in that town, Barto, Pa. They are selling this book in the shrine’s gift shop, and some of the supplemental material for the book was added to encourage discussion of Padre Pio and our Catholic faith,” she added.

“Padre Pio tells a story of a holy man through the eyes of his friends,” she said. “It also examines the Catholic tradition of the Mass, a stigmatist’s intimate relationship with Eucharist, and how Catholic sacraments and sacramentals tie into Christian practice.”

TOPICS: Catholic; History; Prayer
KEYWORDS: bilocution; catholic; padrepio; saint; stigmata
For more information, or to order Padre Pio, An intimate portrait of a saint through the eyes of his friends, call (800) 321-0411, or go to the Twenty-Third Publication Web site (www.twentythirdpublications.com).
1 posted on 07/27/2007 8:00:18 AM PDT by NYer
[ Post Reply | Private Reply | View Replies]
To: Lady In Blue; Salvation; narses; SMEDLEYBUTLER; redhead; Notwithstanding; nickcarraway; Romulus; ... 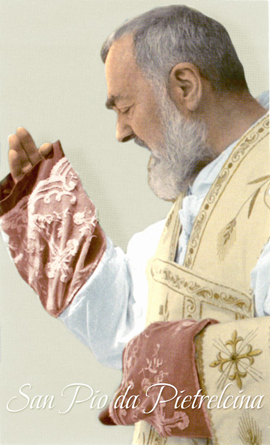 Can you believe he said Mass the day before he died.

And according to the book I am reading, his stigmata totally disappeared upon his death.

The book I am reading about Padre Pio is “Pafre Pio, the True Story” by Ruffin. Very through and packed with facts and stories about his miseries, miracles, etc.

Padre Pio and the Guardian Angel

Cardinal Schotte (Head of the Synod of Bishops) and his view on Dallas; Rose petals for Padre Pio

Saint Padre Pio's Body Not Found in His Tomb?

Padre Pio to be Canonized This June

Someone please help out this earnest, searching non-Catholic who is becoming more interested in Catholicism: what is “the gift of bilocation”? Does that mean, as it sounds, that he could be in two places at one time?

His most astonishing gift to me, was his ability to read hearts and to discern sins in the confessional that the penitent had forgotten or concealed. Heaven knows that I'm always forgetting something!

Blessed Mary of Agreda, author of “The Mystical City of God” was also attributed the gift of bilocation. This link has alot of information of interest:
http://www.tanbooks.com/doct/mysteries_marvels.htm

There are many instances of Padre Pio appearing somewhere where he could not have been -- it's not always clear if he was physically present in two places or if his apparition was in one place while his body was in another. But there were lots of first-hand eyewitness accounts in the biography I just finished reading.

There are a surprising number of Catholics on FR who used to be 'earnest inquirers'. I'm one of them . . . so if there are any questions you have that a convert could answer, fire away!

I'm reading a biography of Bl. Charles de Foucald, and the witnesses say the same thing about him.

11 posted on 07/27/2007 11:22:16 AM PDT by Tax-chick ("Go ahead and water the lawn - my give-a-damn's busted.")
[ Post Reply | Private Reply | To 1 | View Replies]
To: Fairview
There is a well known story about a bilocation of Padre Pio during WWII. Some enemy planes were coming to bomb southern Italy when in the sky appeared a monk in brown robes with his hands outstretched motioning for them to go back. They were frightened and retreated.
12 posted on 07/27/2007 4:08:21 PM PDT by Canticle_of_Deborah (Catholic4Mitt)
[ Post Reply | Private Reply | To 6 | View Replies]