Young nuns from the Sisters of Life Convent play volleyball near the water on the SUNY Maritime Campus in the Bronx, September 2006

...Over the past five years, Roman Catholic communities around the country have experienced a curious phenomenon: more women, most in their 20s and 30s, are trying on that veil. Convents in Nashville, Tenn.; Ann Arbor, Mich.; and New York City all admitted at least 15 entrants over the past year and fielded hundreds of inquiries. One convent is hurriedly raising funds for a new building to house the inflow, and at another a rush of new blood has lowered the median age of its 225 sisters to 36....


This is a welcome turnabout.... As opportunities opened for women in the 1960s and '70s, fewer of them viewed the asceticism and confinements of religious life as a tempting career choice. Since 1965, the number of Catholic nuns in the U.S. has declined from 179,954 to just 67,773.... The average age of nuns today is 69. But over the past decade or so, expressing their religious beliefs openly has become hip for many young people, a trend intensified among Catholic women by the charismatic appeal of Pope John Paul II's youth rallies and his interpretation of modern feminism as a way for women to express Christian values....


...And although the extreme conservatism of a nun's life may seem wholly countercultural for young American women today, that is exactly what attracts many of them, say experts and the women themselves. "Religious life itself is a radical choice," says Brother Paul Vednarczyk, executive director of the National Religious Vocation Conference in Chicago. "In an age where our primary secular values are sex, power and money, for someone to choose chastity, obedience and poverty is a radical statement."

TOPICS: Catholic; Current Events; Prayer; Religion & Culture
KEYWORDS: catholic; nun; religious; sister Navigation: use the links below to view more comments.
first 1-20, 21-39 next last
Special thanks for FReeper Carolina for pointing this article out to me. Another key excerpt from the article (with an inaccuracy concerning Vatican II):

That radicalism is, ironically, embodied by the wearing of the veil. Decreed unnecessary by Vatican II and shed happily by many older nuns, the headdress is for many of today's newcomers a desired accessory. "A lot of my older sisters would never wear the veil," says Sister Sarah Roy, 29, who is the only member of her Sisters of St. Francis of the Immaculate Conception in Peoria, Ill., to do so. (The others wear a simple dark dress adorned by a pin.) Though she admits "people just stare at you like you're a freak," she adds, "It's a trend with younger women wanting to wear the veil now."

"Coincidentally," I read a blogger's article about two young American women who entered a new order called the Sisters of the Adorers of the Royal Heart of Jesus Christ Sovereign Priest. These nuns are associated with the Institute of Christ the King, Sovereign Priest, which offers the Traditional Latin Mass. One woman is from Green Bay, Wisconsin, and the other is from St. Paul, Minnesota. Here are some pictures from their first profession of vows on October 30. 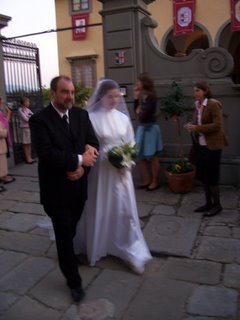 The soon-to-be-novice from St. Paul and her father 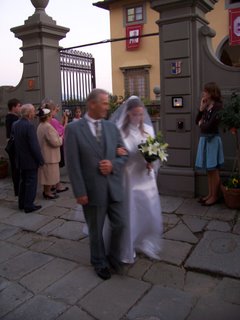 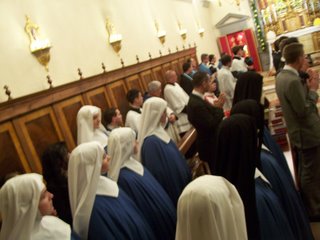 The two Americans, along with three other women (at least one, if not all, are from France), have now become novices, and are wearing the white habits

2 posted on 11/14/2006 6:44:48 PM PST by Pyro7480 ("Give me an army saying the Rosary and I will conquer the world." - Pope Blessed Pius IX)
[ Post Reply | Private Reply | To 1 | View Replies]
To: Pyro7480
"Coincidentally," I read a blogger's article about two young American women who entered a new order called the Sisters of the Adorers of the Royal Heart of Jesus Christ Sovereign Priest.

I saw the article, too. The sisters were radiant. The mass looked glorious.

If I were chosen to the religious life, I would wear the veil. In my nearly humble opinion, this is a very good trend. :) Thanks for posting this.

The part of a nun's headdress that frames the face and falls over the shoulders.

It wasn't Vatican II that said the veil was unnecessary. It was the modernists.
Already back in the earlky'60s, a nun I knew said that her order was thinking about getting rid of the habit, and she said that if they did, then she would leave.

Good point. I don't think of Catholicism when I hear the word "veil".

Nuns that I know do not use this term. Though I admit that I only know one young nun, most that I know are older. Possibly it's a trend among these younger women entering the religious life.

Last year I met a fairly young Dominican (from Nashville). She used the word "habit". She also mentione that the sisters in her order also enjoyed a good round of rugby. I kid you not. I asked her to please send me a photo of the "scrumming nuns", but I think she forgot.

8 posted on 11/14/2006 7:30:41 PM PST by incredulous joe (“Share the Gospel at all times, and, if necessary, use words.” -- St. Frances of Assisi)
[ Post Reply | Private Reply | To 4 | View Replies]
To: incredulous joe; SampleMan
"Taking the veil" used to be pretty much a standard reference for a young lady taking vows to the religious life.

I know that Conan Doyle's historical novels use the term, and I know I've heard it used more recently (like in the 60s, before all this divesting of habits started.)

O f course the obvious point that the progressivism of the 'spirit of Vatican II' lead to a decline in vocations and the resurgent Traditionalism will bring a concurrent increase in vocations. Sadly some will never see this, admit it, or learn from it.

Most or all of them are "traditional" in the Mother Angelica sense, but I think it makes more sense to just call them "orthodox".

These young ladies are orthodox and very definitely evangelical, in the sense of wanting to win souls for Christ. I know some of them (Nashville Dominicans); they teach my kids.

Their order just built a huge new motherhouse because the old one was stuffed to the gills with postulants.

Sisters of Mary, Mother of the Eucharist

Thanks! The Sister of Mary, Mother of the Eucharist are mentioned in the full Time article. Click on the link to see it. :)

15 posted on 11/14/2006 9:41:31 PM PST by Pyro7480 ("Give me an army saying the Rosary and I will conquer the world." - Pope Blessed Pius IX)
[ Post Reply | Private Reply | To 14 | View Replies]
To: Pyro7480; Lady In Blue; Salvation; narses; SMEDLEYBUTLER; redhead; Notwithstanding; nickcarraway; ..
16 posted on 11/15/2006 6:06:36 AM PST by NYer (Apart from the cross, there is no other ladder by which we may get to Heaven. St. Rose of Lima)
[ Post Reply | Private Reply | To 1 | View Replies]
To: SampleMan
The most obvious distinguishing feature between the dumpy dresses favoured by looney-left nuns and the habits favoured by the new generation of orthodox nuns is the veil.

Yes, TROP uses the term as well. Looking at the sisters playing volleyball, and considering some of the young sisters of my acquaintance, I am struck that while islamic garb and nuns' habits are grossly similar in appearance, they are on second glance very different. One is symbolic of oppression, the other of service. The one is accompanied by fear, the other by joy.

There was an article posted yesterday by some slightly leftist lady columnist. She tried wearing abaya out of "solidarity" with her "muslim sisters" ... she quickly found out that just wearing the thing wasn't enough ... she also had to act like a scared little rabbit.

17 posted on 11/15/2006 6:10:03 AM PST by ArrogantBustard (Western Civilisation is aborting, buggering, and contracepting itself out of existence.)
[ Post Reply | Private Reply | To 4 | View Replies]
To: ArrogantBustard
I am struck that while islamic garb and nuns' habits are grossly similar in appearance, they are on second glance very different. One is symbolic of oppression, the other of service.

Yes...it's like livery. The uniform marks the wearer according to the one she serves. Uniforms can be quite splendid, of course, but the splendor is the master's, not the servant's.

The major difference between the burka and a nun's habit is that the face is visible. If anything, the veil and habit concentrate the viewer's gaze on the face.

The burka isn't the only islamic garb ... most of the less extreme forms of "abaya" leave the entire face visible, and they're by far the most common. The meaning is the same, though.