We have received from the Archbishop of Canterbury, Rowan Williams, what must be the outcome of in-depth personal reflection on the un-abating tempest of divergent opinions that have continued to rock the worldwide Anglican Communion in recent years.

It is unlikely that anyone who holds our historic worldwide Communion and its leadership, close to heart, and in prayer will fail to grasp the tensions that the Archbishop wrestles with in an attempt to hold together a fragile Communion that is threatened by the real possibility of disintegration and fragmentation.

No one can assume that there are easy answers – and perhaps that is the crux of the problem facing the leadership of our Communion. The issue at stake is not just a crisis of identity, but also a shopping for palatable answers in a situation of contending convictions and shifting values. The dilemma, and therefore the challenge is whether to revisit the old paths of our forbears or to fashion out a novel establishment that is elastic enough to accommodate all the extremes of preferred modes of expression of the same faith.

His analysis of the situation is quite lucid, and the liberal and post-modern tilt of some interpretations is apparent. But we must commend the fact that it appears we have finally come to that point of admitting that we are truly at crossroads as a Communion and the time to decide on the way forward can no longer be wished away. The mere fact that the Archbishop of Canterbury now proposes a two-tier membership for the Anglican Communion is his acceptance that the wound caused by the revisionists has become difficult, if not impossible, to heal. The idea of a Covenant that would ensure this two-tier membership of ‘Constituent Churches’ and ‘Churches in Association’ is brilliant as the heartbeat of a leader who wants to preserve the unity of the Church by accommodating every shred of opinion no matter how unbiblical, all because we want to make everyone feel at home.

The Archbishop submits that “there is no way the Anglican Communion can remain unchanged by what is happening at the moment.” That is a fact of our human existence. But is this not the time for our Communion to take to heart the instructive lines from Henry Francis Lyte in our treasury of hymns, “Change and decay in all around I see; Oh Thou who changest not, abide with me”? Is this not indeed the time for us to hush our hearts and meditate on the significance of the request of the early disciples on the road to Emmaus, “Abide with us, [they said,] for it is toward evening, and the day is far spent”? (Luke 24:29).  Should the encircling gloom around us not make us ponder on the words of our Lord, "You are the salt of the earth… if the salt loses its saltiness, how can it be made salty again? It is no longer good for anything, except to be thrown out and trampled by men” (Matthew 5:13)? That we must change is without contention, but should we not change for the better – as redeemed, reconciled and transformed people of God who have a witness to a lost and broken world?

Archbishop Rowan candidly observes that our Anglican Decision-Making “lacks a set of adequately developed structures which is able to cope with the diversity of views that will inevitably arise in a world of rapid global communication and huge cultural variety” and that we need to be clear about certain age-old assumptions to be sure we are “still talking the same language, “aware of belonging to the one, holy, catholic and apostolic Church of Christ”. He goes on to highlight some of the “fault lines of division.” He boldly puts the blame at the door of the Episcopal Church where there had been no agreement or any kind of consensus – whether in the Episcopal Church itself or in the global Communion – before the ordination of Gene Robinson was undertaken.  It is noteworthy also that he remarks that “the recent resolutions of the General Convention have not produced a complete response to the challenges of the Windsor Report…” One wonders if such blatant disregard should not be reprimanded.

The Archbishop says we “have tried to be a family of Churches willing to learn from each other across cultural divides, not assuming that European (or American or African) wisdom is what settles everything, opening up the lives of Christians here to the realities of Christian experience everywhere”. He then goes on to suggest that the genuine concerns expressed about orthodoxy and the need to contend for the faith once entrusted to the saints, have made the debate harder, and “reinforced the lines of division and led to enormous amounts of energy going into ‘political’ struggle (!) with and between churches in different parts of the world.” The idea that these genuine concerns have degenerated to the “politicization of a theological dispute” instead of “reasoned debate” is very sadly patronizing.  One would have expected that those who had embarked on this religious misadventure would be encouraged to judge their actions against our well-established historic tradition.

A cancerous lump in the body should be excised if it has defied every known cure. To attempt to condition the whole body to accommodate it will lead to the avoidable death of the patient.

We encourage the Archbishop of Canterbury to persuade those who have chosen to “walk apart” to return to the path chosen by successive generations of our forrbears. We continue to hold our Communion before God in earnest prayer.

You know my heart, my deeds

I need Your discipline

I am here to buy gold refined in the fire

Naked and poor, wretched and blind I come

Clothe me in white so I won’t be ashamed 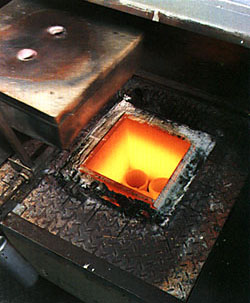 Not being able to find "Don't Let My Love Grow Cold" in my Anglican hymnal, I did a quick web search which indicated that the songwriter is a Canadian of Mennonite background who is currently working with an organization called Vineyard. He appears to be a fine example of the casual/contemporary branches of evanglical protestantism, but other than a general call to faith, is there a particular signicance of this particular song to this thread, the Church of Nigeria or the Anglican Communion?

I'm an outside observer and maybe have no right even to comment, but it's sad to see what theological liberalism has done to this church. Perhaps, though, it's a refining process. That's all the lyrics meant.

You have every right to comment. I was simply curious whether there was another connection other than the straightforward words of the lyrics.

(Anglicans are always looking for a historical context that ties into our liturgical tradition!)