Peter, Witness of the Resurrection 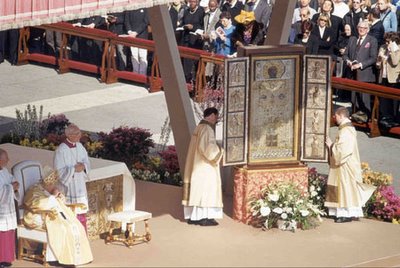 Continuing our coverage of the Piero Marini-championed return of the ancient rite of the Resurrexit in the new Pontificate, our good friend (and camauro enthusiast) Zadok the Roman writes from hiatus to inform that, after its initial (Marini-advocated and researched) return to the celebration of Papal Easter in the Jubilee Year, the (Marini-tasted, John Paul-approved) ritual had, in fact, been used in the following years over which John Paul II was able to celebrate the morning Mass of Easter Sunday.

The photo above, showing the Acheiropita icon returned to its ancient place at the liturgical heart of the holiest day of the Roman calendar, comes from Easter 2002 and also comes thanks to Zadok's research.

As Easter this year also happens to be Papa Bear's Birthday, we're led to wonder if that celebration will have a liturgical aspect.... Not like he could make a wish on the Paschal Candle or anything but, you know, just something special to mark the Big 7-9.

(Hard-core Ratziphiles know that Joseph Ratzinger was also baptized on the day of his birth, which happened to be Holy Saturday in 1927. He spoke in his Milestones of being the first baptized with the Easter water.....)

The Holy of Holies (icon of the Most Holy Saviour)

Easter plans already, when it's almost two months until Lent starts? Is this going to be like "Christmas" for three months? (Speaking of which, I don't have the Christmas decorations down yet.)

What's the use of the danged liturgical calendar if everyone's always two seasons ahead!?

Do you think that planning and preparing for Lent and Holy Week on the scale of a papal liturgy might require more than moving the ribbon from the front of the Missal to the middle?

Maybe if some of our local dioceses and parishes actually PLANNED and PREPARED some of the liturgies with the care to detail that they give to the annual charity drive, the experience might be a little more prayerful.

If you look at the two liturgical books Archbishop Marini prepared with Pope John Paul II, the Ordo Exsequiarum (the Funeral Rites of the Roman Pontiff) and the Ordo Rituum Conclavis (the Conclave Rites) and the first liturgical book he prepared for Pope Benedict XVI, the Ordo Rituum Pro Ministerii Petrini Initio (the Rites for the Beginning of the Petrine Ministry of the Bishop of Rome) and its preliminary study, Sede Apostolica Vacante (Vacancy of the Apostolic See: History, Legislation, Rites, Places and Things) - and then you remember how beautifully those liturgies were celebrated on international TV, you'd realize that these things don't just happen.

Thank God that Pope Benedict and those he has working for him actually care enough about the teaching potential of the papal liturgies to PLAN and PREPARE them well in advance. As the blogger put it "Leading By Example."

We don't have TV. Of course the Vatican has to prepare in advance for major liturgical events. The mind boggles simply considering the sanitary facilities required!

I was being sarcastic, after all the turmoil over people's feeling persecuted because they weren't wished "Merry Christmas" on Veterans' Day. Will we have a similar fluff if the chorus of "Happy Easter!" doesn't start on February 15?

Along with the ice cream and pickles and chocolate cake and all that stuff! :-)

Thanks for your tolerance! Baby is due in about three weeks, and then I will be in a state of giddy euphoria for some time ... but not able to have ice cream and chocolate and all that stuff, unfortunately :-).