In Pakistan, Catholics, Protestants and Muslims celebrated Saint Anthony of Padua in Lahore’s Sacred Heart Cathedral on June 14. Some 500 people gathered for the solemn mass and the rejoicing. A solemn mass was also held in the churches of Karachi and Multan.

In his homily, Fr Andrew Nasari, vicar general for the diocese of Lahore, spoke about Saint Anthony, calling him the “Saint of the poor”. He also explained why he was venerated by people of different faiths.

“Saint Anthony does not only listen to the prayers of Catholics and other Christians but also to those of other religions,” Father Nasari said.

To illustrate this point, the priest spoke about a miracle that he indirectly witnessed. “I was lucky because I was able to visit the Saint’s burial place during a trip to Italy. Whilst I was praying before the tomb, I saw a letter in Urdu (Pakistan’s national language) sent by a Muslim from Pakistan, a cancer patient. In his letter, the man thanked the Saint for his recovery, which was confirmed by medical doctors,” the priest said.

During this year’s celebration, people placed their requests for favours in a basket, which were then read to the congregation. Traditionally, as the requests are read, the faithful bring bread in an act of thanksgiving, which is then blessed by the priest and shared among those present.

The offers received during the solemn mass were donated by the archdiocese to two institutes run by Catholic nuns devoted to education and to disabled children.

The devotion to Saint Anthony of Padua is very strong throughout the country. The Tuesday mass at the Cathedral is known as Saint Anthony's Mass. Catholics but also Protestants and Muslims attend the event bearing gifts and seeking favours.

In last year’s solemn mass, a Muslin couple offered some rice asking for a son, and one was born ten months later.

Saiqa, a Muslim teacher, faces the same problem and was told by Muslim friends to attend Saint Anthony’s masses.

Speaking to AsiaNews, she said that she was “confident that Saint Anthony will listen to me and I will be blessed with a son.”

Her faith in the Saint finds further confirmation in the eyes of Riffat William, a Protestant woman from Lahore.

“I was married for 13 years and had no child,” she said. “I started going to Catholic masses and bringing gifts to the Saint. Now I have two sons, but I still come to the cathedral to pray and will continue coming”.

Pakistan is a predominantly Muslim country. About 97 per cent of its population of 115 million is made up of Muslims. Christians are under 2 per cent. (AM)

O wonderful St. Anthony, glorious on account of the fame of your miracles, and through the condescension of Jesus in coming in the form of a little child to rest in your arms, obtain for me of His bounty the grace which I ardently desire from the depths of my heart . (State your intention)
NOVENA TO ST. ANTHONY

St. Anthony of Padua is one of the most famous disciples of St. Francis of Assisi. He was a famous preacher and worker of miracles in his own day, and throughout the eight centuries since his death he has so generously come to the assistance of the faithful who invoke him, that he is known throughout the world.
LIFE OF ST. ANTHONY

2 posted on 06/16/2005 3:34:42 PM PDT by NYer ("Each person is meant to exist. Each person is God's own idea." - Pope Benedict XVI)
[ Post Reply | Private Reply | To 1 | View Replies]
To: NYer
“Saint Anthony does not only listen to the prayers of Catholics and other Christians but also to those of other religions,” Father Nasari said. St. Anthony preaching to the fishes, who put their heads out of the water to listen. The hard-hearted townsfolk of Rimini who had refused to listen to him were impressed. 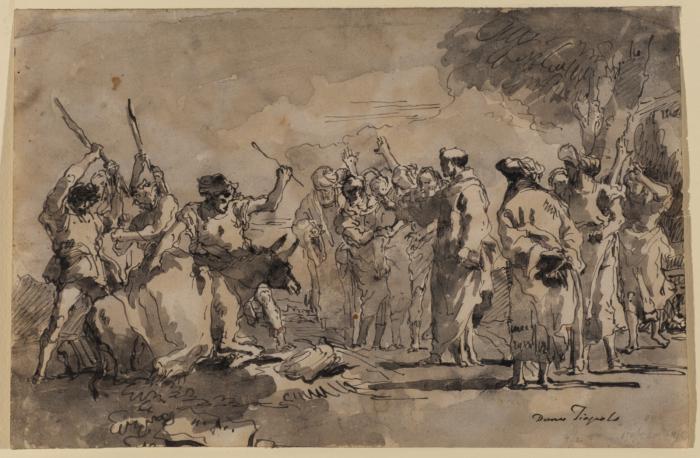 The Miracle of the Mule. A mule that hadn't eaten for three days bowed down before the Host instead of heading for the truss of hay.

But he was most famous in his life for his wonderful preaching - he was known as the "Hammer of the Heretics" and the "Living Ark of the Covenant."

I've been to Rimini several times; it takes a lot to impress them. Just south of Rimini is the city of Termoli where a beautiful, albeit contemporary Catholic church, has been built with a fisherman's theme. The interior of the church is decorated with tiles that form patters similar to those in the picture of St. Anthony lecturing to the fish.

5 posted on 06/16/2005 4:55:40 PM PDT by NYer ("Each person is meant to exist. Each person is God's own idea." - Pope Benedict XVI)
[ Post Reply | Private Reply | To 4 | View Replies]
To: NYer
My folks live on the GA coast in a very small town - we go to the Episcopal church with them on Sunday morning while we're down there (so as not to make family waves), and the little Catholic mission in town has its services at about the same time. So we go to Saturday vigil Mass or Sunday evening Mass down in Brunswick, at St Francis Xavier. You'd think with a name like that there would be Jesuits around, but it's run by Franciscans.

Guess who was standing there when we walked in?

The great Portuguese saint, mistaken for Italian, doing his great work for the Lord in Pakistan -- this story brightens me all about.