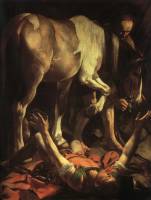 "Then the Lord said, "I am Jesus, whom you are persecuting."

This text tells the story of St. Paul's dramatic conversion on the road to Damascus. Of course, Paul was not looking to be converted to Christ. He was, rather, in hot pursuit of followers of the Way, armed with credentials from the high priest and a passionate resolve to see this "Way" wiped out completely.

The story that unfolds in these few verses is one that has much to say about the nature of the Church and the nature of conversion.

I had never noticed this before reading A. M. Ramsey's The Gospel and the Catholic Church, but Jesus tells Saul that he is the one Saul is persecuting. He doesn't say "I am Jesus, whose disciples you are persecuting," or "I am Jesus, whose Way you are persecuting." In this simple post-ascension "I am" statement, the Lord Jesus identifies himself with his Church. The Church is not simply a group of people who follow Jesus. The Church is in a very real way united to her Lord. It's not surprising that Saul would hear these words and later be the one to develop the idea of the Church as the body of Christ (1 Corinthians) with Christ as the Head (Ephesians, Colossians).* This has tremendous implications of how the Church is to order her life. Simply put, she is to order her life in the same way a human body orders itself...by listening to and obeying the commands that come from the head. Life in the Church is nothing less than sharing in the life of God in Christ, or "partaking of the divine nature (1 Peter 1:4)." A church that orders its life apart from living union with Christ, body and head, is no church at all. When a church sells its birthright for a "mess of pottage (Heb. 12:16)" it loses its place in the line of inheritance. The lifeblood that keeps body and head united throughout the centuries is called Holy Tradition. When this is ignored, changed, or discarded, it is to drain the blood and replace with embalming fluid, which appropriately enough, only serves the dead, and that by making them look better. But they're still dead.

This passage also gives some interesting insight into the nature of conversion. The stereotypical evangelical approach ( and I mean stereotypical...not necessarily typical) is to "present the gospel" and then seal the deal with a "decision" for Christ. Without denying the necessity of a personal embrace of the truth of the gospel, it needs to be said that conversion is a process. Paul heard the living voice of the One for whom he would from henceforth live...and die. And yet, even with that unmediated encounter, Paul was blinded for a period of three days before he was completely enlightened. Why was Paul blinded? Shouldn't his eyes have immediately been opened after encountering the Lord Jesus? No, for the light of Christ was so bright that it simply allowed him to see how in the dark he really was. Those who are in complete darkness must first have their eyes opened to darkness itself before they can see the Light as He really is. Perhaps this is why the early Church was so committed to the Catechumenate as a requirement for Holy Baptism.

Thanks for posting. Well worth the read.

3 posted on 06/04/2005 6:30:34 PM PDT by Minuteman23
[ Post Reply | Private Reply | To 1 | View Replies]
To: sionnsar
"...Why was Paul blinded? Shouldn't his eyes have immediately been opened after encountering the Lord Jesus? No, for the light of Christ was so bright that it simply allowed him to see how in the dark he really was. Those who are in complete darkness must first have their eyes opened to darkness itself before they can see the Light as He really is....."

Thanks for the PING, sionnar. Was just going to read Isiah commentary for awhile but thought I'd check in here first. Your post caught my eye, particularly the part above and I will dwell on it for a while. Thank you so much for being the keeper of the TRAD ANG PING!
4 posted on 06/04/2005 10:23:47 PM PDT by hummingbird ("If it wasn't for the insomnia, I could have gotten some sleep!")
[ Post Reply | Private Reply | To 1 | View Replies]
To: hummingbird; Minuteman23

You're both very welcome!