Our either-or cultural template has come to an unattractive head during the recent Gay Moment, as these days are being dubbed.

Of course we've already named it. We can't just let an epic or a decade or a moment slip by without a title. A label. A category.

Labeling, in fact, is one of our favorite things in compulsive, either/or America. As in, you're either for us or against us. You're either from Mars or from Venus. You're either pro-gay marriage - or you're a right-wing, fascist, dogmatic homophobe.

And, boy, things sure do change fast, as Dorothy once remarked to Toto. Notice how easily Oz slips into conversation these days?

In a matter of weeks - mere nanoseconds if you're a millennium gazer - we've passed from decriminalizing sodomy to ratifying a gay Episcopal bishop to seriously pondering homosexual marriage. Heterosexual marriage isn't doing so well, after all, so what's the big deal?

I'd say that settles it. Let the homosexual weddings begin!

Or not. In any case, dredging up the most extreme failings and ludicrous fictional permutations of a long-honored institution may not be the best argument for indictment. If perfection is our standard, we may as well dismantle all our laws and institutions. We could start with traffic lights. Given the number of people who run them, why not eliminate them altogether?

The either/or notion, meanwhile, so polarizes rational discussion that Americans are cowed into obedient silence. I'm familiar with the inclination, having been on the receiving end of various fatwas for criticizing individuals who identify with a disenfranchised group. That would include nearly everyone except white heterosexual males, about which one can say anything with impunity.

If you criticize a person who happens to be black, for example, you're automatically a "racist." A black columnist once told me he wanted to write about the difficulties facing adolescent white boys but felt it might be taken the wrong way. Too bad. I wanted to read it.

If you suggest as President Bush did - in the most temperate way possible - that marriage is intended for a man and a woman in order to procreate and raise children, you're quickly labeled homophobic. The best "gay" counterargument is to point out that plenty of heterosexual couples, such as Sen. John Kerry, are in post-childbearing marriages.

And so what? Plenty of couples are also infertile. Lots are miserable. But those facts hardly alter the obvious biological design or necessitate alteration of societal structures organized to nurture the ideal.

Let's ignore God (that should be easy enough), and all our gay friends and relatives for just a minute (not so easy), and try to be objective. Is gay marriage constructive? Is it useful to society? Does it solve any problem that can't be solved any other way? I'm unconvinced by arguments favoring holy matrimony for homosexuals when civil remedies are - or can be made - available.

It seems unnecessary, meanwhile, to justify and explain all the reasons why marriage between a man and a woman is beneficial and necessary to civilization. It seems equally unnecessary to jettison our most fundamental social institution in order to accommodate and sanction marriage between two men or two women. As Jonah Goldberg wrote, "In a sane world there would be no need for a 'ban' on gay marriage because marriage means the union between a man and a woman."

Whatever we decide - and gay marriage may win the day - people are not wrong to be concerned. And it is not homophobic to suggest that we may have lost our minds.

TOPICS: Culture/Society; Front Page News; Government; News/Current Events
KEYWORDS: ageofconsentlaws; culturewar; downourthroats; druglaws; fearofbreeders; heterophobia; heterosexualbashing; homosexualagenda; incestlaws; lawrencevtexas; marriagelaws; pc; politicallycorrect; polygamy; prostitutionlaws; samesexmarraige; sexlaws; slipperyslope; sodomylaws
Another good article from Kathleen.
1 posted on 08/12/2003 11:11:54 PM PDT by Elkiejg
[ Post Reply | Private Reply | View Replies]
To: Elkiejg
This is very well done, it really expresses the frustration and ultimate futility of trying to explain to the gay lobby the basic facts of life. It's amazing how stridently a liberal can deny the blatantly obvious! I mean, this is birds and bees stuff, people, your parents are supposed to teach you that... it's embarassing to have to explain this stuff to people.
2 posted on 08/12/2003 11:36:57 PM PDT by thoughtomator (Are we conservatives, or are we Republicans?)
[ Post Reply | Private Reply | To 1 | View Replies]
To: Elkiejg 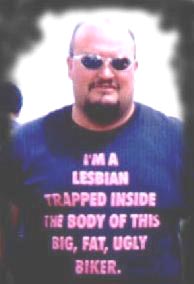 Not that there's anything wrong with that.

3 posted on 08/12/2003 11:39:40 PM PDT by martin_fierro (A v v n c v l v s M a x i m v s)
[ Post Reply | Private Reply | To 1 | View Replies]
To: All
JESUS DEFINES MARRIAGE: "And he answered and said unto them, Have ye not read that he which made them at the beginning made them male and female, And said, For this cause shall a man leave father and mother, and shall cleave to his wife: and they twain shall be one flesh? Wherefore, they are no more twain, but one flesh. What therefore God hath joined together, let not man put asunder." -from THE BIBLE: Matthew 19:4-6
International Healing Foundation

4 posted on 08/12/2003 11:50:38 PM PDT by Cindy
[ Post Reply | Private Reply | To 1 | View Replies]
To: Elkiejg
It seems equally unnecessary to jettison our most fundamental social institution in order to accommodate and sanction marriage between two men or two women.

It's about time someone asked the question -- why should marriage be between just two people? If two men can get "married," as well as two women, why not three or four or twenty? How are we to know that next year the gay lobby won't say that an ideal "marriage" consists of two gays and one bisexual? If the progressives cannot handle the basic concept of male and female, how are we to expect them to understand mathematics? And what is to stop the progressives from accepting marriages between close relatives (ugh)? Any resulting genetically-damaged children can be aborted--this would be leftist utopia, would it not? Finally, what is there to stop the child molesters from trying to be "respectable" and advocate "marriage" between adults and children? Where will our social experimenters stop? Their only standard of value is that someone somewhere must enjoy it, and "it," (whatever the "it" of the moment is) must be counter to the values civilized people have held for thousands of years. Once you accept that, there is no logical stopping point. The "slippery slope" is at a 90 degree angle.

5 posted on 08/13/2003 2:06:57 AM PDT by Wilhelm Tell (Lurking since 1997!)
[ Post Reply | Private Reply | To 1 | View Replies]
To: Wilhelm Tell
You are exactly correct. There is no stopping point. When people become desensitized to one level of decadence, they want to rachet up to a higher level. It operates like an addict who has to have higher and higher doses of a drug to get the same thrill. It easily could advance to marriage with multiple partners, or with marriage to children or animals. I once heard a radio interview with a man who was in love with his horse. I couldn't believe what I was hearing. We know these people have always been with us. However, now, the American public is being forced by the courts and the media into acceptance. I would guess that in their hearts, the majority do not accept perverted behavior and if this society stumps its toe, you will see a terrible backlash which would be bad because many good gay people exist who live their lives in a quiet and dignified way.
6 posted on 08/13/2003 3:17:27 AM PDT by jazzlite (esat)
[ Post Reply | Private Reply | To 5 | View Replies]
To: hellinahandcart; KLT; countrydummy
LOL!
7 posted on 08/13/2003 5:09:10 AM PDT by sauropod (Graduate: Burt Gummer's Survival School)
[ Post Reply | Private Reply | To 3 | View Replies]
To: Wilhelm Tell
Consensual adult incest is still illegal (there was a recent arrest and prosecution in California even though the baby miscarried and the woman was older, yet the man was charged).

Marriages within families are still prohibited (even if they are consensual).

The litmus test for polygamy may come from bi-sexuals (since they do not "choose", so the argument goes, to desire persons of both sexes, how could they be made to deny half of their identity?) or a freedom of religion challenge (muslims, mormons, and other religions accept polygamy and some foreigners already have multiple wives).

I've heard homosexuals take a stand against all of these acts saying that they pervert marriage (while still arguing for same sex marriage). Can't close the door, either everyone has these freedoms absolutely and the government can't regulate it or the government has a duty to society to limit the definition of marriage and the nature of relationships.

Lenny Bruce did a spoken word over jazz thing called "Psychopathia Sexualis" about being in love with a horse from Dallas. Society looked down on the relationship.

9 posted on 08/13/2003 9:04:57 AM PDT by weegee
[ Post Reply | Private Reply | To 6 | View Replies]
To: Elkiejg
If perfection is our standard, we may as well dismantle all our laws and institutions. We could start with traffic lights. Given the number of people who run them, why not eliminate them altogether?

This is certainly the argument of many a scofflaw. "If the law can't/won't be enforced all the time, what good is it?"

Of course, as soon as a problem arises (say an accident) the violation of the law comes into play to determine who is at fault or if there was even a problem. Laws that sit on the books serve a good purpose. Those who claim otherwise are just into social engineering.

Marriage between mixed couples is an institution established by civilized man. Civilized man overcomes his baser instincts and animal desires. Civilized man can determine what animal behaviors he wants to identify as unacceptable in the "civilized" world.

Animals rape, perform interspecies sex acts, eat their young, and do a whole lot of other unsavory things. Doesn't mean that we should join them.