Why aren't these pictures from the May 18, 2003 Jerusalem bombing — only one of a spate of terror attacks over the weekend — on the front pages of the world's most influential dailies? They accurately depict the ability of Israel's new "peace partner" to control his "constituents" who, approved or not, act in his name.

Where is the outcry!?

Forward this page (see above, top-right corner) and let those who just "don't get it" — or refuse to get it — see for themselves. If this can happen in Israel, it will happen in America!

And, lastly, ask yourselves why Israel is being forced to do something against its better judgement. More importantly, do something about it! 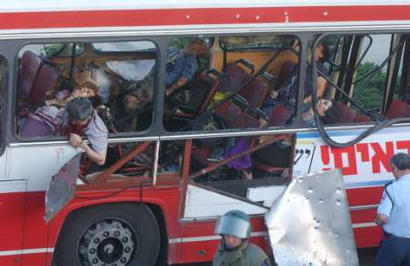 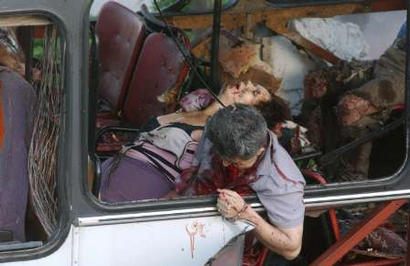 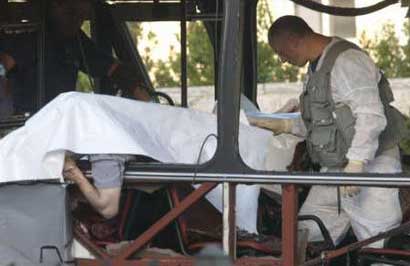 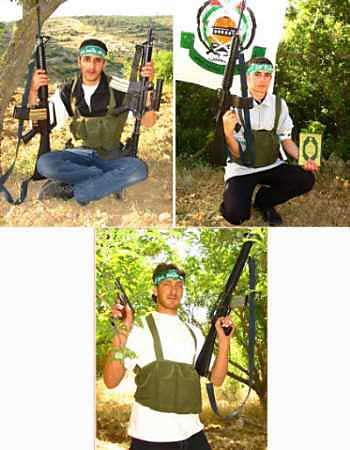 The pictures of the desperate jumpers and dead at the scene of the World Trade Center need to be shown, and often, to keep the focus on the War on Terror.

They want both. It's impossible for these options to be mutually exclusive to vile Pali scum.

How is "Islamic Jihad" different from Al Queda? The Islamists have a stated goal to wipe Israel off the face of the earth - killing every Jew possible. The world, and even worse - the UN has nothing to say other than Israel needs to withdraw from the "occupied" territories. Yet when Israel simply tightens security to protect it's citzens - it is accued of every war crime under the sun - including Genocide.

We exterminate temites because they damage our buildings and other structures. Termites cannot help that they eat wood. They were created that way - it is what their programming forces them to do. The Islamists have shown that they are nothing more than a pest (a very dangerous pest). They program each other to want to destroy everything Jewish/Israeli, Western, and then act upon it.

I don't go out in the woods and find termite colonies to randomly destroy. We kill the one's that pose a threat to our homes/structures. Every Pali/Islamist that is active anywhere near Israel is a threat - even the "innocent" women and children contribute - giving birth to more islamists, and the kids grow up with the same evil hatreds.

When will the US and Israel finally call in the exterminator and remove the treat from Israel (and now the world)?
12 posted on 05/19/2003 10:03:05 AM PDT by TheBattman
[ Post Reply | Private Reply | To 1 | View Replies]
To: TheBattman
How is "Islamic Jihad" different from Al Queda?

I’m assuming these attacks were carried out by Palestinian Islamic Jihad, not Islamic Jihad. If so, they were formed by Palestinians in Egypt, later based in Gaza, so it would be fair to say one difference is that they emerged from Egyptian culture, which only sent four terrorists into the WTC, rather than Saudi culture which sent fifteen.

If in fact it’s Islamic Jihad (unlikely), aka Egyptian Islamic Jihad and Jihad Group, there’s no difference, they merged with Al Queda in June, 2001.

You and I stand shoulder-to-shoulder on that score. I realized just how full of hate these sub-humans are when those Israeli soldiers took a wrong turn a few years ago and were captured and beaten to death by several Pali mongrels. I think Black Jack Pershing had the right idea back in 1911, if that Muslim execution with pig's blood-soaked bullets story is true. Even if it isn't, we should use the tactic anyway. Lately I have trouble remembering that there are some good Palestinians, but they're being mighty quiet.

"We will have peace with the Arabs when they love their children more than they hate us."
— Former Israeli Prime Minister Golda Mier

Say, I've noticed that the term 'homicide bomber' is vastly preferred here rather than the more appropriate (I think) term 'suicide bomber'.

Do the locals here just like being redundant (since all bombings are presumably intended to be homicidal). The 'suicide' description indicates part of the method. Just seems a bit silly to me to refer to them as 'homicide bombings'.......