I guess if you live long enough, you'll see everything. Some Hollywood types are complaining that they are being blacklisted. Yes, the "Land of the Left" feels left out, and all because of the war in Iraq.

Now, most of them opposed it. Even as most Americans supported it. And now some of these actors and actresses say they're suffering because of it.

TOPICS: Editorial; Foreign Affairs; News/Current Events; Politics/Elections
KEYWORDS: neilcavuto Navigation: use the links below to view more comments.
first 1-20, 21-40, 41-51 next last
1 posted on 04/15/2003 3:00:15 PM PDT by Kwilliams
[ Post Reply | Private Reply | View Replies]
To: Kwilliams
"I can assure you that those villains will recognize, will discover in appropriate time in the future how stupid they are and how they are pretending things which have never taken place" 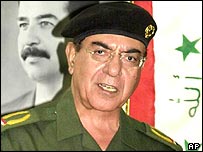 or you can use
PayPal at Jimrob@psnw.com
Become A Monthly Donor

STOP BY AND BUMP THE FUNDRAISER THREAD-
It is in the breaking news sidebar!


Thanks Registered
5 posted on 04/15/2003 3:04:10 PM PDT by Support Free Republic (Your support keeps Free Republic going strong!)
[ Post Reply | Private Reply | To 1 | View Replies]
To: Bluntpoint
"Yesterday, we slaughtered them and we will continue to slaughter them."

But back then it wasn't "hip" to criticize the Klinton administration either.

Not to put too fine a point on this but it bears correction. He said "one of your pathetic movies." I think that makes a big difference. It got a whoop! out of me when I heard it.

14 posted on 04/15/2003 3:17:09 PM PDT by Samizdat
[ Post Reply | Private Reply | To 1 | View Replies]
To: Kwilliams
"Susan Sarandon and Tim Robbins were officially uninvited from an anniversary screening of the film Bull Durham. "

With lots of sequels to follow..."I visited Uday's Love Shack"

17 posted on 04/15/2003 3:21:22 PM PDT by ErnBatavia (Bumperootus!)
[ Post Reply | Private Reply | To 9 | View Replies]
To: Kwilliams
Speaking of Heston, just a few weeks ago George Clooney made a joke about his Alzheimer's, and then defended himself when criticized by saying (paraphrase) "he (Heston) deserves everything he gets. He's NRA."

I don't think Petrovsky at the Baseball Hall of Fame wished Alzheimer's disease on Sarandon and Robbins.

The Hollywood effete elite can dish it out but they can't take it.