If the current excuse for an anti-war movement has proven anything, it's that preaching "Death to America" makes for strange bedfellows. Attend any "peace" rally, whether in San Francisco, London or Madrid, and you'll be struck by the seamless melding of what were once wildly divergent causes. Anti-globalization zealots no longer favor bandanas or baseball caps but Palestinian kaffiyehs.

Neo-communists and atheists alike revel in guttural chants of "Allahu Akhbar" (Allah is great). And Muslim fundamentalists march brashly in step with homosexuals, feminists, and socialists. With their message becoming increasingly popular in Europe and the United States, all today's fledgling Wahabbi Marxists need to cement their influence is a bona fide spokesperson. And in Hussein Ibish - godless, Maoist, and unrepentantly anti-Semitic - they just may have found their mouthpiece. Intensely fond not only of alcohol and atheistic Chinese communism but also hard-line Islamist regimes, Ibish's multi-faceted militancy has made him indispensable to extremists on both the far Left and Arab street.

TOPICS: Miscellaneous
KEYWORDS: aaadc; aadc; adc; china; communism; husseinibish; ibish; maoism; maoist
This guy's been all over Fox and MSNBC (or as Rush calls it: PMSNBC). Good to see who's been his backers.
1 posted on 03/27/2003 5:47:27 AM PST by bedolido
[ Post Reply | Private Reply | View Replies]
To: bedolido
He's the only one on tv who can cause me to throw things. He lies. He obfuscates. He states outrageous nonsense without blinking. He is the epitome of liars.

I've watched his jowls jiggle as he speaks and he reminds of some overfed porker wallowing in deceit.
2 posted on 03/27/2003 5:54:38 AM PST by OpusatFR (Free Speech means you can talk and I can criticize! It doesn't mean you talk and I shut up!)
[ Post Reply | Private Reply | To 1 | View Replies]
To: bedolido
Huessein Ibish

On that note, it is very disturbing to me to have conversations with friends of mine, who are supposedly conservative, and all they do is twaddle about how 9/11 and this war is all Israel's fault. If we didn't support Israel, they say, we'd never have been attacked, nor would we be on anyone's hitlist. Maybe it's the years of watching the documentaries on the Holocaust, but I thought we had said "Never again", and that's why we had the U.N. create a Jewish state to begin with. 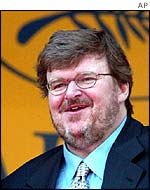