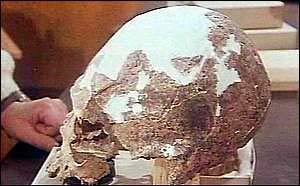 The Mungo burials have cast doubt on "Out of Africa"

A new analysis of Australia's oldest human remains suggests humans arrived on the continent about 50,000 years ago. The evidence is based on a re-examination of the so-called Mungo Man skeleton, unearthed in New South Wales (NSW) in 1974.

Scientists say the individual was probably buried about 40,000 years ago, when humans had been living in the area for some 10,000 years.

The data will come as a relief to palaeontologists who support the "Out of Africa" theory.

Some had suggested the skeleton was 60,000 years old, challenging the popular idea that all people alive today are descended from a group that arose in Africa some 100,000 years ago.

Under the "Out of Africa" hypothesis, ancient people could not have arrived in Australia before about 50,000 years ago [kyr ago] because their spread across the world from Africa was very slow.

Had been covered in red ochre during a burial ritual

Hands were interlocked and positioned over the penis

Mungo Man's discoverer, James Bowler of the University of Melbourne, says the new data corrects previous estimates for the date of human burials at the site.

"Our study shows that humans were present at Lake Mungo as early as 50-46 kyr ago," he said.

"We find no evidence to support claims for human occupation or burials near 60 kyr ago."

Lake Mungo is one of the most important archaeological sites in the world.

The new analysis is based on the dating of sand taken from the burial site.

An earlier team, led by Alan Thorne, put the date at 60,000 years ago based on samples taken further away.

The latest research is published in the journal Nature.

I've heard of some ( highly speculative ) indications that Humans ( of one sort or another - the variety is astonishing ! ) lived in our part of the world at about the same time they were supposedly "arising" in Africa.

I've seen some evidence there may still be a "pygmy" variation of Humans living in certain locations less than 200 miles from my present home : a variation the Indians referred to as "the Great Little People ".

While camped, quite alone, in a semi-isolated area , I awoke when something brushed against my tent. For lack of any better response, I clicked on my flashlight, and whatever it was moved on.

In the morning, I found a set of human footprints leading up to, and away from my tent. The prints were as long as
my ( average size male ) hand, but half again as wide as my hand, and looked exactly like the sort of prints someone wearing moccasins would wear, and their depth suggested a
relatively heavy individual.

I know bears and large raccoons can leave similar tracks, but these were " single-footed " : a gait used by Indians when they are stalking . One foot is put almost directly in front of the other, so that , at a glance , one sees a single line of footprints. Spacing of prints suggested a biped, about 3-4 feet tall.

A few miles away, on this same mountain, there is a natural, glacier fed, ice cave , into which you can walk a few yards. When this cave was being explored, a small rock shelter cave was noted, in which there were remnants and traces of numerous camp fires; however, the size of this little cave is such, one would have to be "child-size" to enter .

War parties from the Min'see and Mohawk often fought on this mountain, but both considered the cave area " off limits" , without mentioning the whys and wherefores.

At present, this section of the mountain still has a "bad" feeling. When you walk along the trail, there is a feeling of being under observation, and it is not unusual to catch a flicker of movement out of the corner of your eye.

Rock climbers from NYC visit parts of the mountain - which is, by the way, honeycombed with limestone caves. Climber injuries and deaths are not unusual- a common cause being "frayed" climbing ropes.

That's an interesting story...and this is in New York state? I think these tiny (Negritos) were all over the globe at one point.

5 posted on 02/19/2003 6:39:42 AM PST by blam
[ Post Reply | Private Reply | To 4 | View Replies]
To: blam
Oddly enough, the African Pygmies are NOT all "Negro" in appearance. Early White explorers noted Pygmies with red hair, blue eyes, Nordic features, Asiatic features, etc.; though the very large "butt" , found in Bushmen, and most African tribes was pretty much universal in Pygmies as well.

In our own Rocky Mountains, there are (native) legends of a similar people - who were cannibalistic, and of whom the Cheyenne, Comanche, Pawnee, etc. were a bit afraid. ( They were said to be a poisoned arrow people. )According to the legends, they were virtually exterminated when the golden eagles decided they were manageable prey - which might help explain the universal reverence towards golden eagles among many of the early western tribes.

By the way, I intend to take the location of my odd experience to my grave. I have a couple of old classmates who live in the area, and who purchased the nearby land as a "hunting club" , and who also help to keep things intact.
6 posted on 02/19/2003 9:08:10 AM PST by genefromjersey
[ Post Reply | Private Reply | To 5 | View Replies]
To: genefromjersey
Some think the Irish legends of lepruchans are related to these little fellows.

Also, the African Bushmen are Mongaloid, not Negroid.