TEN RULES OF A GUNFIGHT
none ^

TEN RULES OF A GUNFIGHT

4. If your shooting stance is good you 're probably not moving fast enough or using cover correctly.

5. Keep shooting until the threat no longer exists; then stay sharp until somebody with a badge tells you to freeze.

6. If you can choose what to bring to a gun fight, bring a long gun and a friend.

7. In ten years nobody will remember the details of calibre, stance, or tactics. They will only remember who lived.

8. If you are not shooting you should be reloading or running.

9. Accuracy is relative: most combat shooting standards will be more dependant on "pucker factor" than the inherent accuracy of the gun.

10. Someday someone may kill you with your own gun, but they should have to beat you to death with it because it is empty

The World According To Clint

Clint Smith, director of Thunder Ranch, is part drill instructor, part stand-up comic. Here are a few of his observations on tactics, firearms, self defense and life as we know it in the civilized world.

Tactics:
"So a guy says, ‘I’m good! I move, I shoot, I communicate.’ Yeah, but can you do it on the ground? Because that’s where you’re gonna be in a fight."

Caution:
"The best example of good training is to never get in a fight."

Defensive Driving:
"If you’re accosted, don’t get out of the car. Put it in some other gear and put both feet on the gas. Clint’s school of driving-add power!"

Running Out Of Ammo:
"If pointing an empty gun at your opponent makes him duck, you may live for an extra two seconds-and who knows? I may find another gun, the bad guy may give up, or the ammo fairy may drop me a magazine."

Target Recognition:
"If we’re going down a hall and I see the end of a double barrel shotgun, I better communicate to my partner, ‘cause I can be pretty sure it’s not the Easter bunny on the other end."

Marksmanship:
"Open up the ground between you and the threat. At arm’s distance, you opponent doesn’t have to be good, he just has to be lucky."

Coordination:
"It doesn’t do me any good to have a partner and shoot ‘em-although I’ve had some partners I’d like to shoot."

Verbal Skills:
"You better learn to communicate real well, because when you’re out there on the street, you’ll have to talk to a lot more people than you’ll have to shoot, or at least that’s the way I think it’s supposed to work."

Counting Your Shots:
"It’s our experience that in a fight you will continue to shoot the gun until the threat goes away or until the gun is empty."

Hesitation:
"Don’t be a deer caught in the headlights of the Kenworth of life!"

Long Guns Vs. Handguns:
"They say you can’t use a rifle or shotgun indoors because a bad guy will grab the barrel. Yeah? Well, he better hang on, ‘cause I’m gonna light him up and it’ll definitely be an "E" ticket ride."

The Defensive Mindset:
"The only reason we would plant our feet is to dig ‘em real good so we can run, ‘cause we’re about to get the hell out of here."

The Survival Instinct:
"Anyone can understand shooting to protect themselves. You give me five minutes and I’ll make anyone on this planet mad enough to shoot me. The real question is, will they have that much time in a fight? You need to make that decision before you start to fight-only you life depends on it."

More:
"The handgun would not be my choice of weapon if I knew I was going to a fight. I’d choose a rifle, a shotgun, an RPG or an atomic bomb instead."

"The two most important rules in a gunfight are: always cheat and always win."

"Every time I teach a class, I discover I don’t know something."

"Don’t forget, incoming fire has the right of way."

"Make (your attacker) advance through a wall of bullets. I may get killed with my own gun, bet he’s gonna have to beat me to death with it, ‘cause it’s going to be empty."

"When you reload (in low light encounters), don’t put your flashlight in your back pocket. If you light yourself up, you’ll look like an angel or the tooth fairy - and you’re gonna be one of ‘em pretty soon."

"Nothing adds a little class to a sniper course like a babe in a ghille suit."

"If you carry a gun, people will call you paranoid. That’s ridiculous. If I have a gun, what in the hell do I have to be paranoid about?"

"You can say ‘stop’ or ‘alto’ or use any other word you think will work, but I’ve found that a large bore muzzle pointed at someone’s head is pretty much the universal language."

"You have the rest of your life to solve your problems. How long you live depends on how well you do it."

"You cannot save the planet. You may be able to save yourself and your family."

"(Thunder Ranch) will be here as long as you’ll have us or until someone makes us go away, and either way it’ll be exciting."

The only item that I could add is:

The Only 'Fair Fights' are the ones that you walk away from !! !!


(btw: do you know a Trainer named Buford ?)

Unless its Bun-Bun from Sluggy Freelance....

Gun control is being able to hit what you aim at.....(MY personal favorite...)

True, but gun control is also using both hands on the big bores. 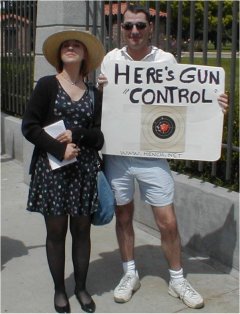 Unless the "threat" is the one wearing the badge!