Senior Israeli security officials believe that if the United States would attack Iraq, threatening the stability of Saddam Hussein's regime, he would respond by launching a chemical or biological attack on Israel.

"If attacked, Iraq is liable to launch missiles and planes against Israel," said Deputy Chief of Staff Maj.-Gen. Moshe Yaalon in a lecture on Monday. Security officials believe that due to its shortage of long-range missiles and launchers, estimated at no more than five launchers and some 50 missiles, Iraq could send pilots on suicide missions towards Israel in planes armed with unconventional weapons.

The IDF General Staff this week discussed the various scenarios that could follow an American strike on Iraq. Security officials assume that the attack on Iraq could occur in two or three months, when military actions in Afghanistan are completed.

The brainstorming came following President George W. Bush's warning on Monday that Hussein must allow arms inspectors back into the country "to prove to the world he's not developing weapons of mass destruction.'' Iraq isn't afraid of American threats and is ready to defend itself against any attack, Iraq's Ambassador to the UN said the following day.

Israel did not respond to the Iraqi attacks during the Gulf War, bending to American pressure not to break up the American coalition lined up against Saddam. The situation is different now, said MK Moshe Arens (Likud), who served as defense minister during the 1991 war. Arens referred to Israel's Arrow anti-missile system, developed together with the United States.

"I think Israel can be pleased that the U.S. is turning its attention to a danger which faces not only Israel, but also the entire world," Arens told Israel Radio, referring to Saddam's attempts to acquire non-conventional weapons.

Syria has chemical missile capabilities "The Syrian army has type 'B' and 'C' Scud missiles, some of them equipped with chemical warheads," Yaalon said on Monday. "These missiles have a range of 500 kilometers, covering most of the area of the State of Israel," he added.

"The goal of Syria remains the return of the Golan Heights," Yaalon said. "The Syrians are hesitant of confronting the IDF directly," he said, attributing this to fears its army is inferior to the IDF. "They prefer to develop a deterrent force with the Scud missiles, Hizbullah-launched terror actions and encouragement of Palestinian terror."

Yaalon warned that an all-out war with Syria could result from the "explosive confrontation with the Hizbullah on Israel's northern border."

Iraq has already initiated chemical warefare with the United States. Now we're getting ready to ensure they meet God's justice sooner than later.

6 posted on 11/28/2001 1:53:32 PM PST by Caipirabob
[ Post Reply | Private Reply | To 1 | View Replies]
To: ex-Texan
I would think anything would be better than the slow protracted death Israel is currently undergoing.

I believe that this nation would not put up with terrorism on a weekly basis the way Israel does.

Has anybody else come to the conclusion that Islam is pretty good at killing unarmed people but are pathetic when it comes to fighting wars?

I am not sure what to think of it all, except that sooner or later, we are going to have it out with these Iraq's. If we don't attack, there may still be chemical and biological war. 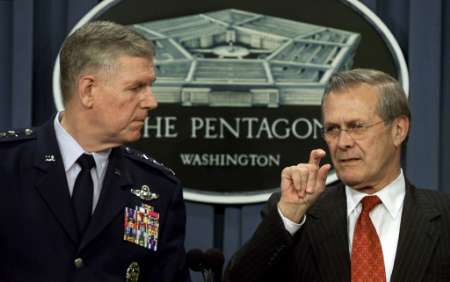 There already IS a biological war, we are preparing a counter-attack.

To: notyourregularhandle
LOL!
16 posted on 11/28/2001 2:09:24 PM PST by RoughDobermann
[ Post Reply | Private Reply | To 11 | View Replies]
To: DainBramage
I personally saw Scott Ritter deny that they had the ability any longer

Agree--Ridder used up his proverbial 15 minutes of fame 9 weeks ago. He reminds me of a gnat buzzing in my ear.

The Islamists and radicals that have been opting for a large scale "Holy War" just might get what they asked for. Maybe that's a good thing, as such events have a way of shaking things out and settling scores.

Either way the Islamic fundamentalist problem needs to be solved one way or the other as it's a friggin' cancer on humanity. Obviously, these people will not stop until the hammer is laid down hard enough to make them stop.

I (like you) not sure if WW3 is the answer, but maybe it is.

Absolutely no sense of honor or loyalty to country.