CASE SETTLED: JUSTICE TO BREAK UP APPLE FOR TURNING MICROSOFT INTO MONOPOLY
SW ^

CASE SETTLED: JUSTICE TO BREAK UP APPLE
FOR TURNING MICROSOFT INTO MONOPOLY
Alternative OS Maker Used Anti-Competitive Practices Against Itself

Redmond, Wash. (SatireWire.com)-- Microsoft and the U.S. Justice Department today announced a settlement in their landmark anti-trust case that calls for the break up of Apple Computer, as both sides agreed Apple's history of "self-inflicted, anti-competitive" management practices is primarily to blame for turning Microsoft into an illegal monopoly.

"We had already won the case, so we were thinking in terms of penalties, and when you do that, it is imperative that you punish those most responsible," said Assistant U.S. Attorney General Charles James. "Well, we couldn't ignore that since its inception, Apple had numerous opportunities to dominate the operating system market, but instead, management incompetence and arrogance resulted in decisions that gave us the Microsoft we know today."

"We believe it's time for Apple to pay for that market manipulation," he added.

"I didn't recognize it at first. I thought they were genuinely trying," he added. "But when they came out with the Newton, I should have known they were purposely steering us toward market domination. I feel... used."

Attorneys general from 18 states, which had originally sought aggressive penalties against Microsoft, said they were satisfied with the agreement, and noted that Microsoft likely would have won on appeal by claiming entrapment.

"We could have punished Microsoft, but that wouldn't have solved the problem. Apple would still be around to do it all over again," said Connecticut Attorney General Richard Blumenthal. "No, you can either penalize the monster, or you can penalize Dr. Frankenstein. We choose the latter."

Under the agreement, Apple must pay for all of Microsoft's legal fees, and will be allowed to continue making one only one product. Reached at Apple's headquarters, CEO Steve Jobs said he had not decided what product that would be, but was leaning toward the new iPod MP3 music player, "because we've invested heavily in it, and it's probably not going to sell."

In the anti-trust case, Microsoft had been charged with using unfair tactics to crush competition and restrict choice by manipulating computer manufacturers and consumers into using Microsoft's operating systems and browsers. None of this would have happened, Constitutional scholars agreed, if Apple hadn't made "so many amazingly bad business moves" over the years.

This anti-competitive, pro-Microsoft-monopoly behavior began in the 1980s, when, unlike Microsoft, Apple refused to license its operating system to other computer makers to build clones. In an even more disastrous decision, Apple licensed its software to Microsoft so it could develop applications for the Macintosh operating system. Not long thereafter, Microsoft came out with its first Windows product, which looked "remarkably like" Apple's.

"'Hey Bill, here's the source code to our operating system. But no cheating!'" quipped Blumenthal. "I think we should shut down Apple on that move alone."

As the years went by, Apple management's reaction to its steady decline was to insist that its products would win because they were better, and to continually charge more for them until, by 1994, it decided it would allow clones to be built after all. This was followed by the decision that it would not allow clones to be built after all, then by a decision that it would allow it, then it wouldn't, and finally, no one cared.

Fits nicely with the "root causes" crowd at the moment!

Steve's Reality Distortion Field should kick in any day now...

It's a wonderful read that documents how we got the hardware we use today, starting in labs back in the late 40's at MIT, Cambridge, and Stanford. It covers the start of most of today's hardware/software giants and almost giants.

To: CheneyChick
yeah OK, so then.... its worth $400? I still can't change the files unless the computer is right there. And not all macs have IEEE 1394.

And 10 minutes is THEIR claim at optimum speeds...

There are tools for carrying around 5 gigs of files, they're called laptops. some even carry 30 gigs of files.

I might get a mac though. Circuit city has a bunch of them, you can bring in a trash bag and fit as many as you can in the bag for 99 cents.
(you must be able to close the top of the bag, no choosing, limited to stock on hand)

They are now prevented from using illegal contracts to control the market.

For the first time in it's history, Microsoft will actually have to compete in the marketplace!

Instead of just getting lawyers bribe or threaten distributors, they'll actually have to compete.

This should be an interesting thread . . .

Would those cost more or less than $400? 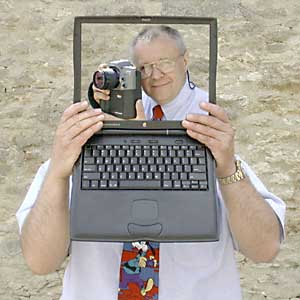 or not. AOL being the number one ISP says a lot...

18 posted on 11/02/2001 7:16:43 AM PST by KneelBeforeZod
[ Post Reply | Private Reply | To 15 | View Replies]
To: Sabertooth
why would anyone need to carry 5 gigs of files? for work? too good for jpegs, so everything is a tif file? if someone works where they have to buy their own computer then its time to get a new job.

We have about 20 Sparq stations sitting upstairs by the NOC...come by after dark, and I'll give everyone a loading dock discount...

The real battle is the distributors like Gateway and Dell.

Those contracts are now officially unenforcable.

Microsoft has never won an actual competitive battle at the retail level. They've always used control of the distribution channels.

It just might be a whole new world in the software biz!