What many political observers initially expected to be a titanic clash between Georgia's incumbent Republican governor and the former president of the United States turned out to be a lopsided fight. Brian Kemp thumped Donald Trump's hand-picked challenger in the GOP primary, advancing to a gubernatorial re-match with Democrat Stacey Abrams in November. Abrams starts the general election campaign in a defensive crouch, engaged in damage control over her "worst state" self-inflicted blunder – while spinning incoherently about how "increased turnout has nothing to do with suppression," as her "Jim Crow 2.0" demagoguery goes up in smoke. Her opponent is the man who beat her four years ago, in a much more favorable Democratic environment. The fact that she's been spreading conspiratorial lies about that loss ever since doesn't change the reality she's gotten famous and rich by denying. Before looking too far ahead, let's assess the significance of Kemp's primary romp, along with a few additional notes from last night:

(1) Trump is still top dog... Many analysts are writing and talking about what a blow this is to Trump's influence. It's certainly a high-profile loss, and a stinging one at that. Trump wanted to defeat Kemp badly, as revenge for Kemp's correct and honorable refusal to help the former president try to steal Georgia's electoral votes in 2020. That Trump's proxy, David Perdue, got crushed is a healthy sign for the republic, as I see it. But Trump critics and skeptics shouldn't kid themselves. He's racked up some significant wins in other statewide races, between JD Vance in Ohio, and potentially Dr. Oz in Pennsylvania. There have been setbacks (Idaho and Nebraska governor, for instance) as well, but the notion that Trump's power within the party is clearly on the wane still strikes me as overstated wishful thinking. As things stand, Trump would enter the 2024 GOP presidential primary as a heavy frontrunner.

(2) ...But Trump's not invincible. It's more than possible to overstate the meaning of Kemp's victory, but it shouldn't be understated either. Trump threw everything at him. Perdue's entry into the race was marked by a Trump "complete and total" endorsement ad. The former president's operation and allies spent time and big money on the race. Trump meddled aggressively, including an in-person rally. This wasn't some throwaway blessing. It was personal. Kemp was exceptionally disciplined; he never lashed out at Trump, conveying a "hey, I've got no quarrel here" message to rank-and-file Republican voters in the Peach State. He couldn't avoid Trump's wrath, but he avoided stoking theirs. Focusing instead on notching conservative wins as governor, Kemp trained his fire on Stacey Abrams, "woke corporations," and other adversaries who unite center-right Georgians in opposition. Kemp accumulated useful enemies, in other words, and has established a track record of defeating them, too. This Politico deep dive into Kemp's campaign illustrates how the incumbent's operation was focused, ruthless, and successful. A passage:

When Brian Kemp’s top donors huddled with the Georgia governor and his lieutenants at Atlanta’s Capital City Club earlier this year, they had reason to worry that his political career was about to come to an end...the Kemp team reassured the nearly 200 well-heeled contributors in attendance they had a plan...By the time Perdue launched his campaign in December, he found that Kemp had used the levers of his office to rally the support of state power players and pass legislation that assuaged pro-Trump voters. Kemp had won the backing of many of Perdue’s former longtime advisers, making it difficult for Perdue to build a political operation. And the governor had spent months aggressively courting the former senator’s biggest donors, leaving Perdue financially devastated and demolishing his plans to establish a big-spending super PAC.

...Last June, Kemp phoned Steve Hufstetler, a Georgia real estate developer and major GOP contributor, and asked if the two could meet at Hufstetler’s office. At first glance, Hufstetler was the type of donor who could conceivably fund a Perdue primary effort: He had given six-figures to Trump’s reelection effort, had served on Perdue’s Senate campaign finance committee and had been concerned about Kemp’s handling of the 2020 election. After the election, he had conducted an informal survey of Kemp supporters he knew and found they no longer backed the governor. But Kemp worked to sway Hufstetler during the 90-minute meeting, delivering what the developer later recounted to POLITICO as a “lengthy and data-driven explanation” about why he did not intervene in the vote count. Hufstetler walked away convinced — and eventually donated more than $100,000 to back the governor. The courtship illustrates how aggressively Kemp moved to deprive Perdue of money, effectively shutting down his fundraising reservoir.

They had a plan, and boy did they execute it. Kemp was smartly gracious to Perdue in his victory speech Tuesday night, but he also reveled a bit in the extent of his dominance:

>@GovKemp trumpets the triumph of his allies over far-right challengers backed by Trump. “It looks like Team Kemp is chopping a lot of wood tonight.” #gapol pic.twitter.com/W5HM7OhQ3S— Greg Bluestein (@bluestein) May 25, 2022

And this is a good line, with an eye to the general, especially if it's married with reminders of Abrams' optics problem on COVID restrictions:

Brian Kemp notes in his victory speech that Stacey Abrams criticized him for opening Georgia too soon during the pandemic. And he warns that, if she wins, the state will perennially be one covid variant away from more lockdowns. But he promises to never impose covid restrictions.— James Hohmann (@jameshohmann) May 25, 2022

(3) A "wow" margin. Late in the race, a fading and dyspeptic Perdue said that he still didn't believe the polls pointing to a blowout. "I guaran-damn-tee you we are not down 30 points," he said. He was right, just not in the way he meant. As of this morning, with well over 90 percent of the vote in, he trailed by roughly 50 points. A total shellacking. It's not just that Kemp ran a high quality campaign, though he did. Trump's endless, misplaced grievance act is wearing thin among even many 2016 and 2020 Trump voters. Not necessarily hardcore base members, but some of his supporters who are more invested in GOP wins and Democratic losses than personal loyalty dramas. This sentiment may run especially strong in Georgia, where Trump's claims depressed Republican turnout and thus handed two Senate seats – and therefore US Senate control – to the Democrats last year:

Georgia underscores one of Trump’s big problems if/when he runs again. He, of course, won’t be able to let go of the 2020 nonsense, and nobody wants to hear his whining about it anymore.— Brendan Buck (@BrendanBuck) May 25, 2022

"Nobody" is too strong, but there's truth to this. A large, large number of right-leaning voters are still very much MAGA/America First enthusiasts. But quite a few of them are evidently not interested in an endless backwards-looking fight about 2020:

Just about every “stop the steal” Republican is getting rejected by Republicans in Georgia tonight. The message is voters want to move forward, not settle Trump’s grievances for him.— Erick Erickson (@EWErickson) May 25, 2022

(4) A few other ink blots. Trump's guy didn't just lose the gubernatorial contest in Georgia. His pick for attorney general also got absolutely blown away by the incumbent, and Secretary of State Brad Raffensperger – whom Trump personally pressured to "find" 2020 presidential votes, and who became a target of "stop the steal" ire – won re-nomination with an outright majority, avoiding a runoff. His Trump-backed challenger out-performed Perdue, but not by enough. Two institutions-defending Republicans held the line and recaptured their party's respective nominations.  hat's significant, and heartening, in my book.

Meanwhile, in Alabama, Rep. Mo Brooks came back from the dead to force a runoff in that state's GOP Senate contest (though he came in a distant second place). He did so not because of a Trump endorsement, but after he lost one. The former president didn't like Brooks' weak polling position a number of weeks ago, fearing that his horse would finish in an embarrassing and distant third place. In an effort to sidestep that political black eye, he withdrew his formerly "complete and total" endorsement of Brooks, under the ludicrous claim that Brooks – a fire-breathing right-wing "stop the steal" compatriot – had gone "woke." Brooks continued to promote himself as the MAGA candidate in the race, albeit after Trump's very public breakup with him. That's when he surged. That comeback, for which Trump cannot possibly take dubious, Mastriano-style credit, is noteworthy. Again, this doesn't mean that Trump's hold on the GOP is fading, or irreversibly diminished. Many, many Republicans covet Trump's imprimatur. But it doesn't signal nothing, either.

(5) Notes from the Lone Star State. Tuesday was a very dark day in Texas history, for obvious and gut-wrenching reasons. The elections moved forward, of course. Among other outcomes, in a key border district, a more moderate Democrat (the only House Dem to oppose the party's radical abortion bill) may have narrowly fought off a Squad-style challenge, barely prevailing in a runoff, pending final results. It should be a competitive seat in November. And with the state attorney general's easy re-nomination, might the multi-generational Bush political dynasty be finished?

The last Bush family defeat in a Texas primary before tonight: pic.twitter.com/wTFtBcM8Sv— Steve Kornacki (@SteveKornacki) May 25, 2022 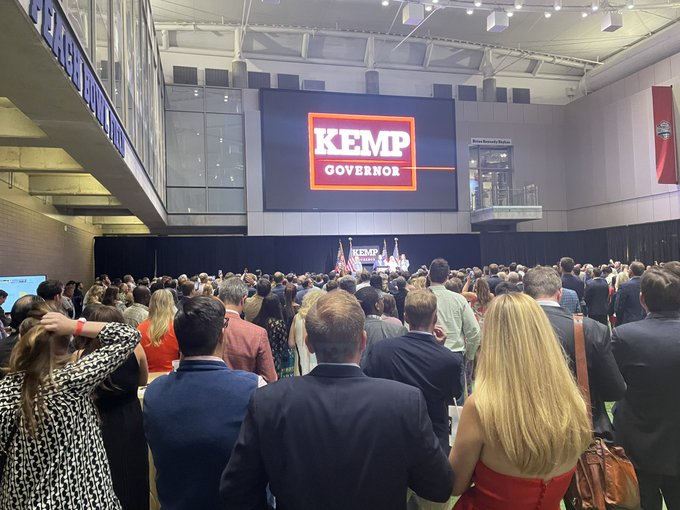 Was the fix in?

Hopefully, statewide Republicans in Georgia can sweep to power to offset the activism of the Abrams administration.

How many Democrats crossed over to vote for RINOs? I’ll bet a good number of them.

Most likely.
Big Momma Stacey is gonna probably be the next GA gov.

Maybe Trump’s accusing Republicans of stealing the 2020 election from him is backfiring with the sane wing of the party.

Yeah I don’t get it, but I personally know quite a few people in SW Georgia who said they were voting for Kemp.

Maybe it was a shitty campaign. But these same people didn’t want Biden in the WH either.

The liberal media is gloating this morning that Trump’s political influence is gone, even the Republican base has abandoned him. Conveniently leaving out that his endorsed candidates have won their primaries in 78 of 83 races a 93% success rate.

If speaking the truth is “backfiring” you do it anyway, because people of honor speak the truth.

Gee I sure hope Abrams doesn’t bring up stolen election but looks forward and focused on the dim party’s important issues
Like: global warming..gun confiscation.. racism..how to create even more inflation.

Hey, the Never Trump and Vichy Republican will also win a few.

I can do nothing about Georgia and damn little except vote and send a few dollars to my favored candidates here in Arizona but my hope and prayer is Never Trump & Vichy Republicans lose more than they win, well before the general in November.

They rigged it like in 2020, but this time for kemp. And then in November, they will just get the riggers out for Abrams, and kemp will be right back into familiar territory—as being a weak republicant loser.

Rats. Trump should have used reverse psychology and endorsed Kemp and Ratsburger.

Guy Benson missed the biggest point of all….. most Georgians do not dislike kemp