The U.S. Supreme Court is apparently planning to vote to END Roe v Wade in a DRAFT OPINION by Justice Samuel Alito — leaked to Politico this evening.

The draft opinion was leaked to the press – something that is almost unprecedented.

The Supreme Court is planning to vote to strike down the decision of Roe v. Wade, long considered a vanguard of guaranteeing a right to an abortion in the United States.

The opinion draft – originally obtained by Politico – was written by Justice Samuel Alito, one of the six justices appointed by Republican presidents on the nine-member court, repudiating both Roe and the 1992 Planned Parenthood vs. Casey decision.

‘Roe was egregiously wrong from the start,’ Alito writes. ‘We hold that Roe and Casey must be overruled,’ he continues in the document, titled ‘Opinion of the Court.’

‘It is time to heed the Constitution and return the issue of abortion to the people’s elected representatives.’

Politico noted that this is the first such case in modern history of a Supreme Court draft decision being leaked to the public while the case was still pending.

It is unclear which justice would support such a move, which would typically be released at term's end -- by June.

But the fact that the planned decision was LEAKED -- which is considered a criminal act -- is almost as big a story as the decision, and it has shocked Court experts. 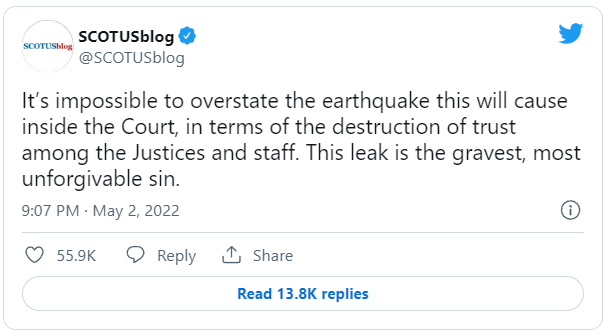 And it didn't take long for fingers to point at the most far-left justice on the Court: Sonia Sotomayor.

How many times will it leak?

Should stiffen the spines of the YES votes.

How about that new bitch, did she have access?

Yet another Democrat created crisis in an effort to turn around the 2022 election.

Up next, the resurgence of COVID…

This story is beyond the leak and about who may have leaked it.

We apparently now have leftist activist SC Justices that will call out their street armies if a decision is going against them.

A Kagan or Sotomayor clerk. That’s where my bet is placed.

Did their boss approve ? Time will tell.

Since it leaked to Politico its probably some libtard hoping to flip a swing vote.

I am willing to bet this is a hoax

Politico?!? We are even believing a thing these jerkoffs write, why?

Doesn’t it seem like a coincidence that just as the Dems are being destroyed on every issue the “War on Women” pops up?

Yep, I forgotten that.

Did they all cover for the Fake Ukraine Whistleblower?


Did they cover for Strzok, Lisa Page, Comey, Weismann and McCabe?


Does anyone remember the SCOTUS being overheard saying there would be Riots outside the Building if they took up the Election case?


That’s all the insight you need to know.

This was done with the tacit approval of one of the Supreme Court Justices, possibly Sotomayor or possibly even John Roberts (I wouldn’t put it past him). No clerk is going to fall on their sword without having an escape career and promise of a job beforehand. I smell a big black robed Justice Rat, a DemocRat.

“...But the fact that the planned decision was LEAKED — which is considered a criminal act ...”


Yeah, who is going to prosecute this criminal act? The Brandon Justice Department? Brandon will want to award him or her the Medal of Freedom.

You may be right about “hoax.”

Sotomayor would have leaked to the Times or Post, almost certainly in an effort to get heroic RBG status.

If a Supreme Court justice leaks a decision, is that impeachable?

Well, she is the self-proclaimed wise Latina, so....