Long Funeral Homes, Short Life Insurers? Ex-Blackrock Fund Manager Discovers Disturbing Trends In Mortality: The Majority of Deaths are Not Classified as Due to Covid-19.
Nation and State ^ | 02/04/2022 | Tyler Durden

Four weeks ago, OneAmerica insurance company CEO Scott Davison revealed that they had witnessed 'the highest death rates in the history of this business - not just at OneAmerica' with a jump of '40% over what they were pre-pandemic.' Interestingly, Davison noted that the majority of deaths are not classified as due to Covid-19.

So the CEO in his own words. They are mandating vaccines in the workplace and raising premiums in lower vaccinated counties because they are mistakenly guessing here initially. The premiums will change to higher vaccinated areas as time moves on is my guess. He missed the plot. pic.twitter.com/avjFxkn7su — Ed ☯️Free Thinker & Oracle (@DowdEdward) January 3, 2022

The implication to many was clear - that the Covid-19 vaccine is linked to the excess mortality, and months of vaccine injury reports were now spilling over to actuarial data - which is beginning to show, among other things, that younger, working-age people began dying in greater numbers as vaccine mandates hit - for a disease which primarily kills older, non-working age individuals. The counter argument, often presented without evidence, is that the increase is due to people who postponed elective surgeries and other medical treatments during the pandemic.

Ex-Blackrock fund manager Ed Dowd is in the former camp, and has spent the last month analyzing breadcrumbs associated with a rise in excess mortality vs. pre-pandemic levels. Given that we're now in the middle of earnings season, there are some pretty big crumbs rolling out of the insurance and funeral services industries which are beginning to paint a disturbing picture. 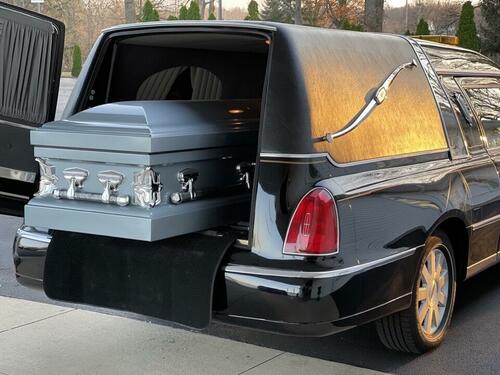 On Tuesday, financial insurance company Unum reported that their Life segment saw an increase of 9% in their ratio of payouts vs. premiums (Benefit ratio), a 17.4% increase in 2021 vs. 2020 despite widespread vaccinations, and a 13.3% increase over 2019.

In 2019 the unit had $266 million profit, last year a profit of $82 million & this year a loss of -$192 million. A swing of $458 million lower over 2 years. Important to remember these are employed working age folks. Other fun numbers: 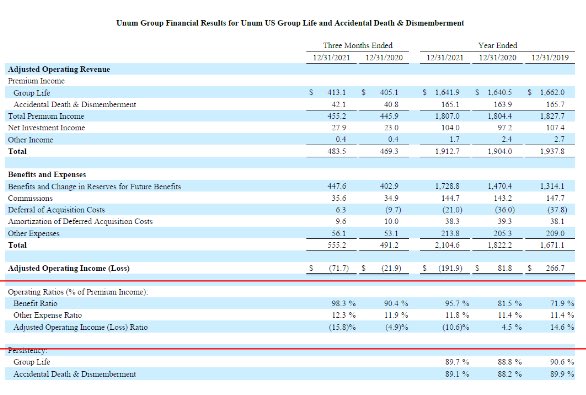 On Wednesday, Dowd noted that funeral home company Carriage Services saw a 28% increase in September 2021 vs. 2020, and a 13% increase in August vs. the same period. Funerals and cremations are up 12% and 13% respectively on the quarter.

In general, funeral homes saw an uptick in business in Q3, and Dowd will be closely monitoring Q4 reports which are expected around Feb. 15 - less than two weeks away. 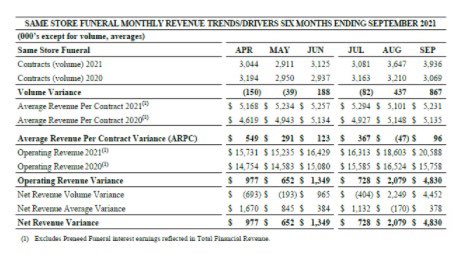 Business has been quite good since the introduction of the vaccines & the stock was up 106% in 2021. Curious no?

Guys this is shocking as 89% of Funeral homes are private in US. We are seeing the tip of iceberg. The public companies report Q4 middle of February pic.twitter.com/M2rpNhIJzt — Ed ☯️Free Thinker & Oracle (@DowdEdward) February 2, 2022

Dowd also noted on Wednesday that Lincoln National's death claims are up 13.7% y/y, and up 57% in Q4 vs. 2019. CFO Randy Frietag explained on Thursday that in 2021, the share of young people dying from Covid doubled in the second half of the year.

Tom Gallagher of Evercore asked the question of Covid mortality impact. That was the answer.

Boom 💥 folks it’s clear as day what changed in second half of 2021. Variants less virulent than original but we had mandates & boosters hitting. This is a total shit show to behold. — Ed ☯️Free Thinker & Oracle (@DowdEdward) February 3, 2022

Meanwhile, Reinsurance Group of America noted in their Thursday earnings call that Q4 was impacted by a meaningful level of Covid-19 mortality claims despite the fact that the Covid-19 vaccines have been around for more than a year.

Remind us again how the vaccines are helping?

Also noting a spike in younger deaths which peaked in Q3 2022, is Hardford Insurance Group, which reported that mortality is up 32% from 2019 pre-covid levels, and 20% from 2020 pre-vaccine levels.

Is there a fancy Latin name for the fallacy where someone points out that a useless harmful covid mitigation measure is useless and harmful, and lockdowners respond with a link to a chart that shows covid kills people? — Jay Bhattacharya (@DrJBhattacharya) February 4, 2022

Some key questions for the insurance companies:

Reinsurance Group of America, for example, reported a profit in Q4 2020 when the most of the population was unvaccinated and amid a deadlier strain of Covid-19, yet they registered a loss in Q4 2021 with more than 60% of the country fully vaccinated (and around 75% who have received at least one dose).

Perhaps this is why Pfizer is now actively fighting to suppress research data submitted to the FDA for approval - while the pharmaceutical giant and its peers continue to enjoy legal immunity from vaccine injuries.

In closing, some tongue-in-cheek non investment advice from Dowd:

Long funeral homes short life insurance. Not investment advice but illustrates my point. One industry is growing the other is not. $SCI $CSV pic.twitter.com/OIvUCQGdNX — Ed ☯️Free Thinker & Oracle (@DowdEdward) February 3, 2022

TOPICS: Culture/Society; News/Current Events
KEYWORDS: chinavirusvaccine; covid; deaths; investinfuneralbiz; lifeinsurance; mortality; sarah; trends
Business has been quite good since the introduction of the vaccines & the stock was up 106% in 2021. Curious no?

Guys this is shocking as 89% of Funeral homes are private in US. We are seeing the tip of iceberg. The public companies report Q4 middle of February. 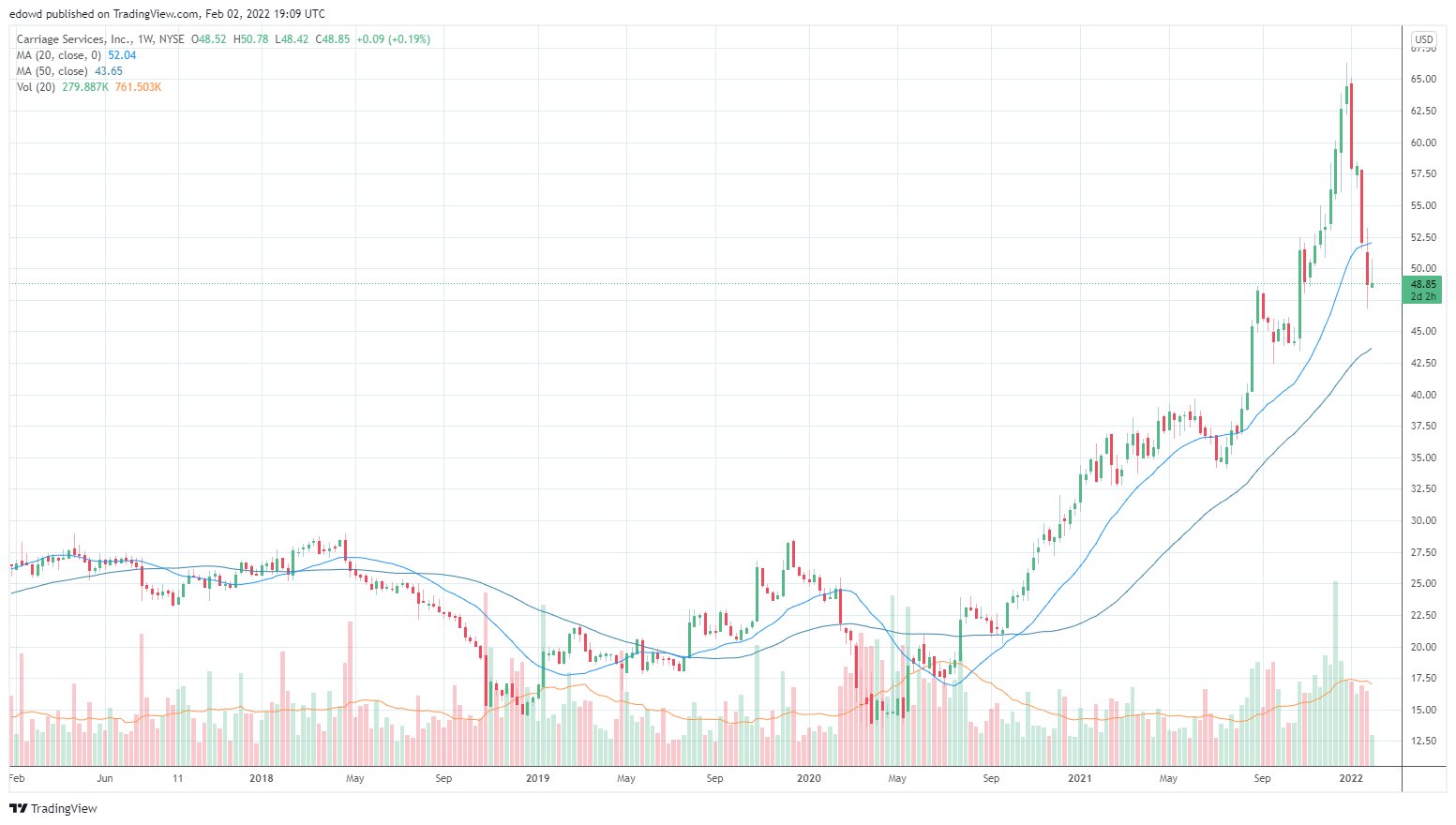 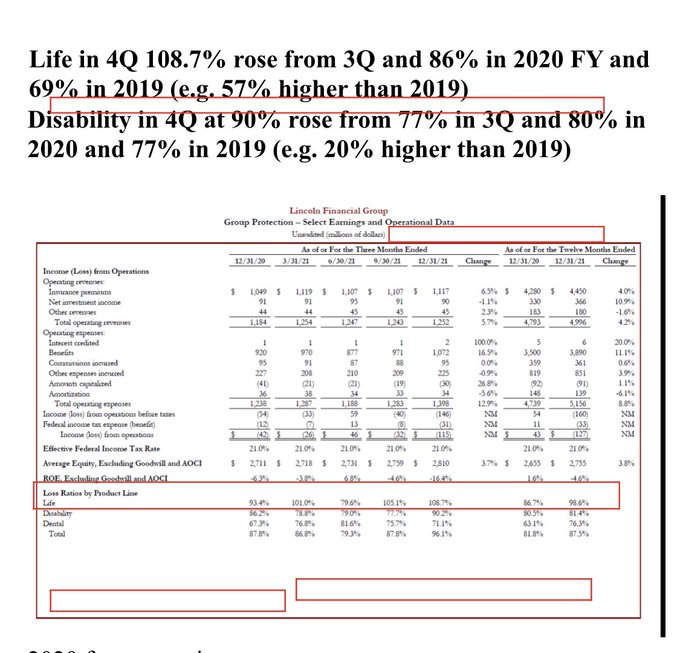 The Branch Covidians are in league with those pushing "equity."

Kill off the peak wage earners to make way for the invading hoard.

“The counter argument, often presented without evidence, is that the increase is due to...”

Pretty good article except that it wasnt a counter argument because they were floating that excuse BEFORE there was clear proof to everyone that it was killing the young notavax victims.

That means they knew and continued to deny what many of us were saying.

Definitely invest in the funeral biz!

I have not gone so far as to plot number and ages of decedents in the county newspaper obituary but just by inspection it is significantly up. As in, it used to take about half a page and some days [the paper comes out twice a week] a full page.

Lately it has been TWO full pages every issue and sometimes running into another half page.

The other odd thing is the number of people between 40 and 60. They are numerous. Of course there are the usual 80 year-olds and such but lots of them.

I hear of but don’t count the numbers or age, a lot of people who have had cancer and it suddenly worsened and killed them.

I know the owner of one of the local funeral homes and I am going to ask him what he knows. I know they keep track of numbers and money but I doubt they plot that. Maybe.

I hate to think bad things but I’m feeling like the unjabbed are going to look really smart in the next couple of years.

6 posted on 02/04/2022 9:28:20 PM PST by Sequoyah101 (Politicians are only marginally good at one thing, being politicians. Otherwise they are fools.I ha)
[ Post Reply | Private Reply | To 1 | View Replies]
To: E. Pluribus Unum
The Branch Covidians are not interested in reality.

Exactly. This is a huge cult, and unfortunately there are even some cult members among our own ranks. The evidence becomes clearer by the day that the so-called “vaccines” are ineffective and even deadly. Evidence for our claim is usually immediate and direct: people getting severely ill or dying, sometimes within minutes of receiving the shot, and more often within weeks. I’ve personally known of four people within my circle of friends who died suddenly and inexplicably in just this way, one an airline pilot who had recently passed his first class flight physical.

On the other hand, evidence for the cult members’ claims of vaccine effectiveness and safety are all just assumptions and not evidence at all. They just assume that if they got COVID and did relatively well with it that it must have been because of the “vaccine”, and would surely have been much worse without it. That’s nothing more than baseless guessing. In contrast, when folks on our side get sick and treat it with Ivermectin, the result is usually rapid, dramatic improvement; a clear and obvious correlation, not a wishful assertion.

And now we have real data from actuaries, not from biased and frankly untrustworthy “medical experts” with an agenda, and the conclusions couldn’t be clearer. The “vaccines” are killing people, either directly via the shot itself or by wrecking their immune systems and making them MORE susceptible to the virus. Unfortunately for those who joined the vax and mask cult, the damage is done and cannot be undone.

Whether we look smart might become irrelevant if this thing really goes south. I am praying that that will not happen and us on this side are wrong about the virulency of the vaxxes because mass death won’t be fun to deal with and a breakdown in society isn’t in anyones interest. From what has been shown in these stats it’s bad enough already. There was a saying during the cold war about a nuclear holocaust that living survivors would envy the dead.

Almost all life policies have “act of war” and “act of terrorism” clauses. it would be in the best interest of the insurance companies to prove the virus and the vax are just that.

An alarming number of people in the 20-50 age range.

It is observational (I don’t disparage by calling it anecdotal) but the trend is certainly there. I went back to look for data and it as hard to find as good, comprehensive historical climate data that is up to date.

CDC deaths data is nearly two years old and the provisional data is six months old. Funny how social security knows when everyone dies within less than a month to cut off their checks isn’t it? The state knows within days of a death and yet their data is useless. Somebody knows nearly real time, they just don’t make it available.

Today our county coroner came out with the latest death stats. Deaths number twice as many as two years ago.

No mention of vaxxing deaths.

So, it wasn’t just my imagination, counting the obituary notices.