China’s anti-corruption watchdog has threatened Walmart Inc. with a consumer boycott, accusing the U.S. retail giant of “stupidity and shorted-sightedness” over its removal of Xinjiang-sourced products from its Sam's Club online app in response to the forced labor of religious minorities and the genocide of Uyghur Muslims.

The Chinese Communist Party’s Central Commission for Discipline Inspection accused Walmart and its Sam’s Club chain of boycotting products from the northwestern region of Xinjiang and trying to “muddle through” the controversy by not responding to complaints or releasing a statement, Reuters reported.

“To take down all products from a region without a valid reason hides an ulterior motive, reveals stupidity and short-sightedness, and will surely have its own bad consequences,” the Chinese Communist Party’s Central Commission for Discipline Inspection said on its website in response to Walmart Inc.'s actions.

The Chinese government has been accused of imprisoning over 1 million Uyghur and other ethnic Muslim minorities in so-called “re-education” camps, otherwise known as concentration camps, where reports have revealed that they are severely tortured and forced to memorize Communist Party propaganda.

Neither Walmart nor Sam’s Club has responded to the backlash in China. However, Walmart Inc.’s move came after President Joe Biden on Dec. 23 signed into law a measure banning imports from Xinjiang over concerns about forced labor.

China’s warning comes after comments emerged on social media in that country that products typically sourced from Xinjiang on Walmart and Sam’s Club online stores were not available.

Bentonville, Arkansas-based Walmart generated revenue of $11.43 billion in China during its fiscal year that ended Jan. 31, according to the newswire.

As the 2022 Winter Olympics are scheduled to take place in Beijing in February, human rights organizations had urged the Biden administration to send a statement to the Chinese government over its egregious human rights abuses by boycotting the Olympic Games.

The U.S. government labeled China’s treatment of the Uyghurs as a “genocide” during the final days of the Trump administration, a designation that has been upheld by the Biden administration.

“For the past several years, China has been continuously arresting Uyghur people and placing them in ‘re-education camps,’” the U.S.-based China Aid said in a statement released in June 2020. “Chinese authorities claimed these camps provide vocational training for Uyghur people. However, camp survivors reported being starved, tortured, forced to study pro-government propaganda, and made to do extensive labor with little to no pay.”

The Chinese government has continually denied that it has unjustly imprisoned Uyghur and other Muslim minorities in the Xinjiang region. However, documents called “The China Cables” that were leaked in 2019 to news outlets revealed the ideological motivations and structure behind such detention centers.

The documents were leaked to the International Consortium of Investigative Journalists, a consortium that worked with 17 media partners, including the BBC and The Guardian. Included in the leak was a nine-page memo reportedly sent out to officials operating the camps by then deputy-secretary of Xinjiang’s Communist Party, Zhu Hailun, in 2017.

The BBC reported at the time that the memo said detention centers in Xinjiang should be run as high-security prisons with strict punishments and no escapes. The memo also ordered detention center officials to “increase discipline and punishment of behavioral violations,” make remedial Mandarin studies a top priority and “promote repentance and confession.”

According to The Guardian, the memo also revealed that inmates at the camps were made to serve at least one year but could be detained indefinitely.

China has also been criticized for cracking down on unregistered house church movements as well as persecuting religious minorities like the Falun Gong, Tibetan Buddhists and others. 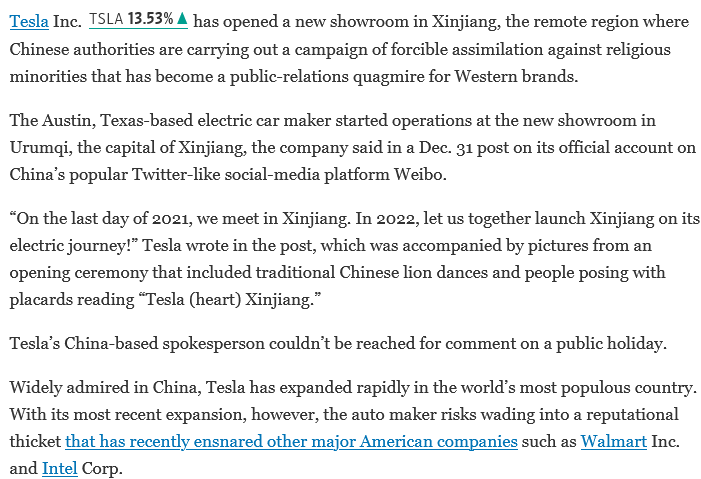 Walmart and China get along fine.

This is all just an act. Walmart will never limit Chinese products. Not even if they contained body parts of children.

4 posted on 01/03/2022 6:51:34 PM PST by Celerity
[ Post Reply | Private Reply | To 3 | View Replies]
To: SeekAndFind
The only reason they care about the poor persecuted religious minority here is because they're muslims.

When chinese christians are persecuted it's all good.

I remember way back when......If CocaCola only sold 1 can per person that would be 1 billion cans. Look what it all is costing US now.

I will have to make more of an effort to shop there.

I have to admit, I’m a little torn by this anyway. Everyone knows the Muslims must be a giant pain in the Chinese ass, being Muslim and all. The Chinese have a ton of other problems with stability. I really don’t know who to root for here but I want them both to lose.

Wasn’t one of the early draws to Walmart was they only carried USA made products? After Sam Walton died, the new board went total China.

I used to work in Bentonville, not very far from Mr. Sam’s office. Sam Walton was a great man. You could spot him in a stadium with over 100k people in it. I left shortly after Mr. Sam died and David Glass took over. It all went downhill from there.

Wasn’t one of the early draws to Walmart was they only carried USA made products? After Sam Walton died, the new board went total China.

My sentiments exactly. I spent two years in Hong Kong at our Consulate and got a real taste of these issues.