They tell you Joe Biden got 81 million votes in November. More than anyone in history, including birthday boy Barack Obama. Yes, the same guy who days ago was declaring “My butt’s been wiped” and eating food stuck on his chin. 81 million. If you’re Hillary Clinton, you’re saying, “There’s no way he got 15 million more votes than me!”

Biden was given 8.1 million excess votes.

Before you say Keshel’s whacked out, ask yourself a couple questions:

“Do I really believe Joe Biden got 15 million more votes than the first woman to ever be a major party nominee (65.8 million), whose adoring supporters were left wailing and screaming in the streets?

Or 12 million more than the first black major party nominee (69.5 million), an historic, charismatic candidate, whose worshipful supporters hailed him as a messianic figure?

Or six million more than the head of the MAGA Army who was filling arenas when Joe had trouble filling a few circles on the lawn? A guy who gained six million votes in 2020?”

No. Nobody really believes that.

If you believe that, you believe Barack Obama is having his 60th birthday bash catered by Dominos...

If these claims about election fraud were bogus then the Dims would have no issues with verifiation, however...

Just to play devil’s advocate (I actually do believe the author’s assertion) while Dementia Joe certainly did not inspire anyone to vote, it is possible that Trump hatred from the left (and squishy middle) could have. 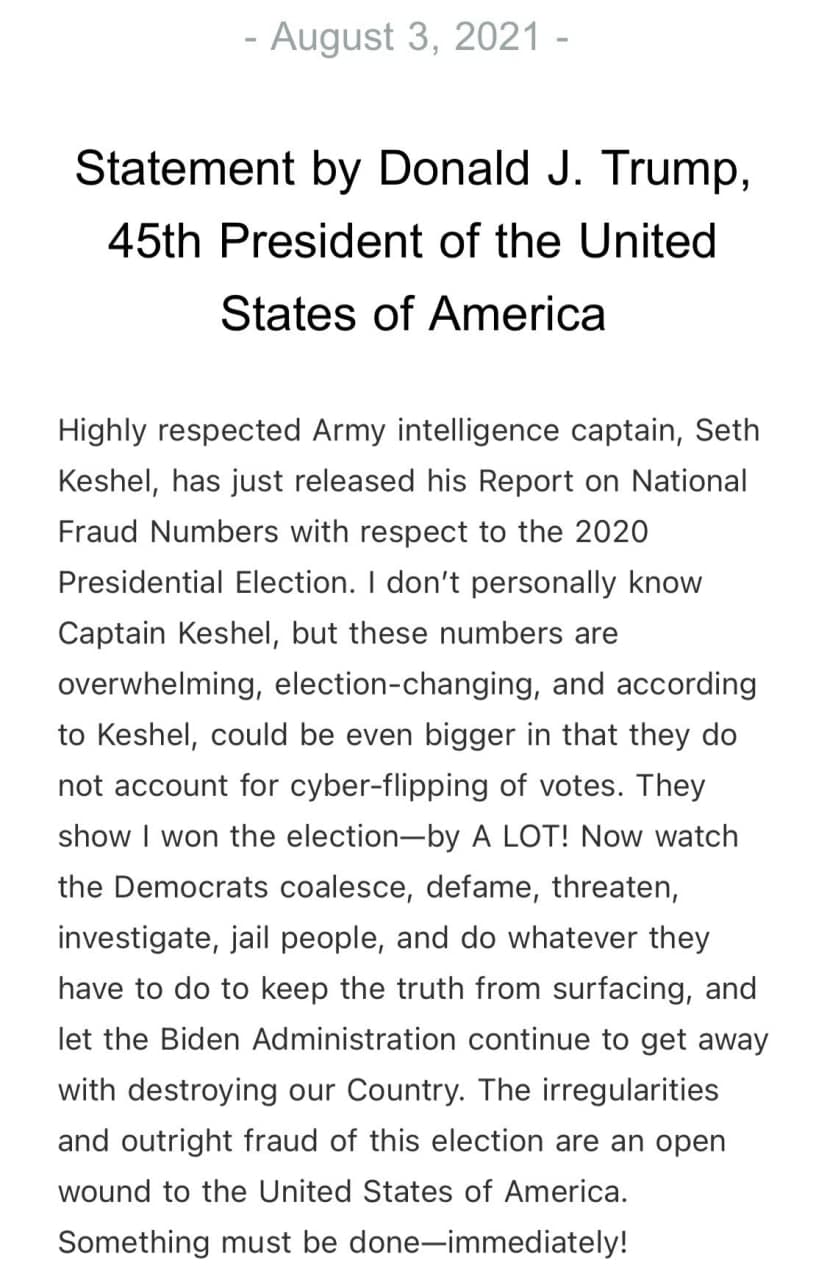 Trump lost Arizona so bad Fox News called Arizona before the votes were in, before the polls closed, while people were still waiting in lines to vote. They were so desperate to get rid of Trump they had to act fast.

After they did that they went silent on the fraud that was happening right before their eyes.

Hoping no one would notice. They never dreamed there would be audits and never ending talk of voter fraud.

I'm going out on a limb and guessing the Tucker/Ryan/Fox cabal to get rid of Trump are squirming in their seats wondering what they can do besides trot Brett Bair out again to appease the Obama/Biden/Harris/NSA by denouncing Republicans on 1/6 hearings.

That's the central question. Unless he has something more than his opinion and his analysis we'll never know for sure.

Do I really believe Joe Biden got more than 15 million votes? No.

Regardless of what the Lame Street Media, the Democratic Party or the Biden administration says, I still believe Biden’s legacy will be “The first fraudulently elected US President”.

Thanks, you and I and many more like us know that:

On November 3rd, just before I left work here in AZ, I checked to see what was going on. I was stunned to see that they had called VA for The Turnip with only 1% of precinct having reported.

I will agree with you that it is possible, but it is highly improbable.

I believe that Joe Biden got 81 million votes.

But a lot of them were manufactured or duplicated.

The dims are fighting like hell for the truth to come out.

They’re fighting to PREVENT the truth from coming out.

As my sister frequently remarks, it is not what you must believe in order to accept the outcome of the 2020 election that that is difficult. The hardest thing is that you must deny the evidence of your own eyes.

And yet somehow, I am supposed to believe that Joe Biden got 81 million people to vote for him?!?!?!