As a dual American and an Israeli, July 4 has always had a dual special meaning. That is, since 1976, America’s bicentennial. Like many American children, the year leading up to and during the bicentennial was a period of sharing national pride in all that America stood for, and its history. Growing up in a town with a famous revolutionary war battlefield, the reenactment of that battle made things extra vivid.

As an Israeli, it is remarkable to me that after 200 years, the U.S. was able to celebrate its independence by reenacting the war in which it fought to gain independence. Israel, on the other hand, after only 73 years, is still fighting its war of independence. Battles take place on our home front, across the border in neighboring countries, and with terrorists on land, sea, air, and now in cyberspace. Maybe, in another 127 years we’ll have that privilege.

One of the most famous battles in Israel’s ongoing struggle to preserve its independence took place on July 4, 1976. As America was celebrating its 200 years of independence, Israel engaged in a unique battle, rescuing civilian hostages through a bold commando operation 3500 kilometers away. The celebrated operation was comprised of imagination that was unimaginable, tremendous bravery, and numerous miracles.

Here’s the backstory: On June 27, an Air France plane originating in Israel with 248 passengers was hijacked by Arab and German terrorists, and flown to Entebbe, Uganda’s main airport. Uganda’s government provided cover for the hijackers who were welcomed personally by dictator Idi Amin. While Israel had been fighting Arab terrorists for decades, the involvement of German terrorists brought back haunting memories of Jews being rounded up and murdered throughout Europe just 35 years earlier. This was underscored by the separation of the 248 passengers into different groups, not as Israelis and non-Israelis, but as Jews and non-Jews.

The terrorists threatened to kill more than 100 Israeli and Jewish passengers if their demands were not met. This threat led to the planning of the rescue operation. It’s worth noting that the pilot and crew chose to stay with the Jewish hostages when all the non-Jews were separated and eventually freed.

Based on testimony from the released hostages, Israel’s Mossad established an accurate picture of the hostages’ location, the number of hijackers, and the role of Ugandan troops. Additionally, because Israelis were involved in many building projects in Africa during the 1960s and 1970s, a large Israeli construction company had built the terminal where the hostages were held. This allowed Israel to construct a replica of the building with the assistance of those who had helped build the original, while planning the military operation, a case of Divine coincidence.

Because of the 45th anniversary, I decided to plan a webinar telling the story of Entebbe with people who experienced it: hostages and IDF troops. One social media post led to dozens of referrals to people in four countries who were connected. This underscored the incredible reality of two degrees of separation in Israel. I exchanged many text messages, emails, and phone calls.

One day this week, I was standing in the kitchen having a wide-ranging conversation in Hebrew. When I got off the phone, my wife asked who I was speaking to.

“That was so cool. I just spoke to the second in command from the operation in Entebbe.”

I said no more and she nearly shrieked, “MUKI?! I remember him from the movie!” (Operation Thunderbolt) My wife understood that I had just spoken to a national hero. Indeed. Muki Betser is considered one of Israel’s legendary commandoes. As deputy commander of the elite Sayeret Matkal unit, he helped plan, was the deputy commander of the ground element, and he was the commander of the break-in teams during the Entebbe operation.

Most people who know about Entebbe know of its commander, Lt. Col. Yonatan Netanyahu, the older brother of Israel’s former Prime Minister. “Yoni” was the one soldier fatally wounded during the operation. But Muki is no less central, famous, and indeed a national hero. Unfortunately, he’s not comfortable sharing his story in a webinar in English, but he did tell his story in a book that’s been translated to English, “Secret Soldier.” But I had the true privilege of making a new friend who shared some of his story, and whose modesty is only seconded by his greatness.

The Entebbe operation was an unparalleled success. It took place under the darkness of a nearly new moon illuminating the African sky. The battle that took a week to plan lasted less time than the length of the movies made to tell the story. There were 102 rescued hostages, five Israeli commandos wounded, and one was killed. Three hostages, all of the hijackers, and 45 Ugandan soldiers were killed. Most of Uganda’s Soviet-built MiGs were destroyed.

It would have been impossible for Israel to transport a convoy of planes and equipment 3500 kilometers, each way, alone, undetected, without God’s protection and the involvement of numerous people. With Israel then controlling Sinai, planes were able to take off much closer to Uganda. Because of good relations with Kenya, members of the Jewish and Israeli community in Nairobi implored Kenya's President Jomo Kenyatta to help. Israel received permission for the IDF planes to cross Kenyan airspace, and refuel in Kenya on the way home. As a Christian, Kenya’s president understood God’s imperative to bless Israel. Because of this, in the aftermath of the operation, Idi Amin retaliated and slaughtered several hundred Kenyans in Uganda.

I remember the battle in Uganda as if it were yesterday. It’s one of the most famous because it was so public. Every detail was planned and executed with virtual perfection including securing a Mercedes that was the same as that of Idi Amin, painting it to look like Amin’s car and, after touchdown, driving that car and convoy of other vehicles to look like Ugandan military straight to the terminal building. However, the convoy was loaded with Israeli rescuers, not Ugandan terrorists.

But Israel has fought many battles far from its borders, and still does, that are not public, albeit no less incredible. Entebbe’s heroism and success are still celebrated globally. It represented a combination of human bravery, imagination, the will to fight and overcome terrorists, and God’s protection. It serves as the model for Israel’s can-do attitude. But, especially with threats today from much further away in Iran, there are many inspiring lessons that can and should be learned from this to help in our fight against a new generation of the same terrorists. Entebbe inspires us and gives us hope. It’s important to have these public miracles to do so. But it’s no less important for our enemies who should remember this too.

Words no terrorist wants to here.

Watched “The Raid on Entebbe” a few weeks ago, Charles Bronson as the commander.

Along with Old Glory, I fly the Magen David. Shalom and Happy Independence Day!

Reading this reminded me of what an evil man Idi Amin was.

I was 12, but I watched the nightly news with my parents (ABC, Harry Reasoner IIRC), and for the past few days the situation in Uganda had been the dominating story.

The church (Berean Baptist Church, 3846 Jackson Ave., Ogden, Utah — can I get a shout out? — Pastor Hal Mason) was going on with the planned, traditionally patriotic service (lots of our patriotic songs are really hymns of praise to God, if you listen to them).

I believe the hymn singing portion of the service was ending and Pastor getting ready to begin his sermon when one of the deacons walked swiftly to the front and handed him a note.

He read it, then came to the pulpit and said something like “Israeli soldiers have rescued the hostages in Uganda, with little loss of life. Let us stand and sing the Doxology (”Praise God, From Whom All Blessings Flow”). Afterwards, he carried on with the service, but a lot of people (to my 12-year-old mind, oddly) kept sniffling at random moments.

I don’t remember the TV coverage of Bicentennial events around the country that day being seasoned much with news out of Israel or Uganda, but... that was quite a moment there at church.

The perceived winners of wars get to call themselves “freedom fighters”, and celebrate their independence. And, they get to call the losers “traitors”.

Meanwhile, the perceived losers are not allowed to have any say regarding what they will be called, or even what the war will be called.

The losers are called “rebels”, or even “traitors”.

If the losers had a say in what the narrative would be, perhaps the Brits would call today “Treason Day”.

If the MAGA protesters of January 6, 2020 had been successful in persuading the Senate to do their Constitutional duty and certify the valid electors, they would have been hailed as Patriots, and the deep state conspirators would have been hanged for treason.

Since the MAGA protesters were unsuccessful, fake history will call them “white supremacists”, “domestic terrorists”, and “insurrectionists”.

The winners truly do get to write history, and we should remember that every time we repeat the usual clichés about Lincoln’s war.

He had contacts within the intel community and one of them, just before the raid telegrammed him with the message, "Fatty is in for a big surprise", which he knew referred to Idi Amin.

When I was working in Saudi in the mid-nineties Amin lived in Jeddah. He converted to Islam and Saudi Arabia gave him refuge. Bloody murderer.

Is there a MAGA David?

Our Air National Guard C-130 unit was part of the Rwanda massacre famine relief effort. We were based at Entebbe Airport and one of our planes was parked right in front of the old tower that was in use at the time. The other plane was parked in front of the terminal where the hostages were held. I was able to go to the top of the the tower and saw the damage from all the bullets that were fired up there. The old terminal was occupied by squatters, so I wasn’t able to see the inside of that. During our time there an Israeli army soldier who was paralyzed in the raid came to Entebbe to revisit the scene. 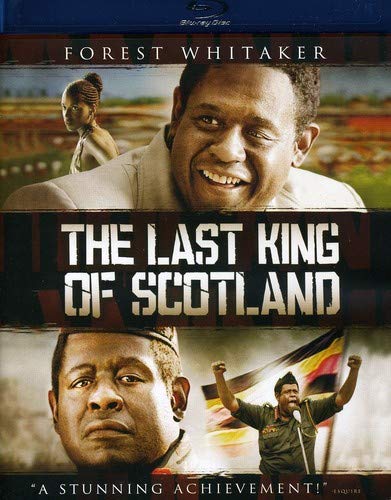 A movie about Amin...

I went to an ACE school run out of one in Layton. It had a basketball rivalry with two other church/schools in Salt Lake City. The youth groups of several Baptist churches from Brigham City to Provo did events together.

Other churches I knew of, either because my friends were members or because their names were prominently seen here and there: a “Bible Church”, probably affiliated with IFCA (I attend one such now in Michigan), United Church of Christ, Seventh Day Adventist, and Roman Catholic. A group of Methodist churches owns the summer camp facility that “my” group of baptist churches rented for two weeks each year.