The Green Youth has called for children to be able to vote in elections in the future. “Voting is a basic democratic right. This must apply to all people. Democracy means that you have a say in your own living conditions. We believe that it is wrong to legally deny a certain group this across the board,” said the spokesman for the Green Youth, Georg Kurz.

The Green offspring therefore strives to ensure that under 16s are also allowed to vote reported German magazine Spiegel Online. “The limit of 16 years is also set completely arbitrarily,” complained Kurz. “I know so many committed, politically educated people who are not yet 16 years old. And they are categorically excluded from the election.” He added: “Anyone who registers independently to vote can vote too.”

Kurz was bothered by the fact that the group of over 60 year olds in the country currently had significantly more votes than those under 30 year olds. “That is a blatant imbalance.”

The Greens chairman Robert Habeck had already spoken out in favour of lowering the voting age. In May 2020, he advocated voting rights from the age of 16. The same party is unironically opposed to child labour.

In the past few years, the Green Youth has caused a stir with their demands, including decriminalizing paedophilia. Last August, for example, they demanded comprehensive police reform because of “blatant abuses” in the security forces. According to them, officials should be monitored more closely in the future and no pepper spray should be used. Around a year ago, the Green Youth expressed solidarity with the left-wing extremist Antifa.

The Green Youth has meanwhile admitted to some mistakes in creating an advertising poster. In choosing the aesthetics, the necessary sensitivity had been lacking, admitted a spokesman for the Green Youth recently. Or perhaps they gave away too many clues about their origins. 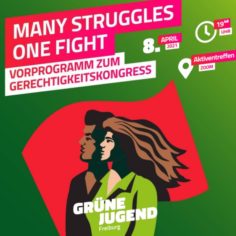 The Green Youth used communist propaganda posters from the Soviet Union for their congress. Photo private

The stumbling block was two illustrations that the Green Youth used for their spring congress, which took place at the end of April. One shows a dark-skinned man and a light-skinned woman next to a red flag with their gaze fixed on Utopia in true Soviet style. Above the slogan reads: “Many Struggles – One Fight”. The Green Youth of Freiburg was responsible for the motif.

In another picture, which was also published on the website of the Federal Association of the Green Youth, a woman and a man hold up their arms and grab a flagpole with a red flag. Here, too, the man is dark-skinned.

The choice of pictures of the Green Party offspring had caused outrage on social media. The main point of criticism was that the pictures were reminiscent of propaganda motifs from the Soviet era.

German tabloid Bild also took up the case with the headline “Green youth advertises with Lenin propaganda”. In both advertising posters, the Green Youth used two propaganda posters from the “All-Soviet Lenin Communist Youth Association – Komsomol,” the paper highlighted. Komsomol was the youth organization of the Communist Party of the Soviet Union.

The spokesman for the Green Youth replied to the newspaper that they did not know that these were motives of the communist youth of the Soviet Union. “We only became aware through your email that the said organization had used a similar motive 90 years ago,” they said in response to the allegations. 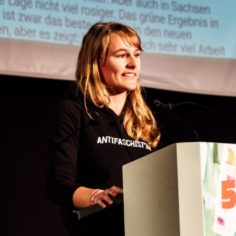 The Greens named an Adobe Stock collection as the source for the images. There these pictures are offered in a “Revolution Promoting Set”. In fact, some of the motifs, including the two chosen by the Green Youth, are pure unadulterated communist propaganda.

In the end, however, one question remained unanswered. Why did the Green Youth colour the man black in both pictures black? In the original from the Adobe Stock collection he is light-skinned. The spokesman for the Green Youth did not comment on this.

The posters are not the only hints as to the origins of the Greens. They have been involved in some very shady activities throughout their existence. Some 40 years ago, on May 11, 1981, the FDP politician Heinz Herbert Karry was murdered in his sleep. The investigation into this bloody act led directly to the Greens: Green party heavyweight Joschka Fischer’s private car had been used to transport the murder weapon.

And Brigitte Heinrich, EU member of the Greens and also working for the state security of the GDR, told her Stasi superiors in East Berlin, that she knew who the murderers were: People from her party.

This current concealment of the violent and communist origins of the Greens linking it not only to the support groups of the Red Army Faction (RAF), but also to the notorious independent Maoist Communist League of West Germany (KBW), obfuscate the fact that the leading cadres of these groups were accepted by the Greens soon after the party was founded. Leading politicians of the Greens such as today’s Prime Minister of Baden-Württemberg, Winfried Kretschmann, or Reinhard Bütikofer, EU Member of the Greens, were active in these Maoist associations at the time, cheering on the Cambodian mass murderer Pol Pot.

This happens to be the same party that mercilessly judges its opponents morally. The Greens themselves are dead silent about their past and their former glorification of the RAF, Pol Pot and other revolutionary murderous gangs. Instead, they project an image of honest environmentalists who do not murder people in their sleep.

Back to their nazi roots eh?

Kids can’t even decide on what sex they want to be, much less vote.

3 posted on 05/26/2021 10:33:36 AM PDT by albie
[ Post Reply | Private Reply | To 1 | View Replies]
To: Red Badger
The main point of criticism was that the pictures were reminiscent of propaganda motifs from the Soviet era...the Green Youth used propaganda posters from the “All-Soviet Lenin Communist Youth Association – Komsomol”

Good thing such communist-inspired imagery never took hold in the USA. If it had, I'd really be worried about the future of our country. 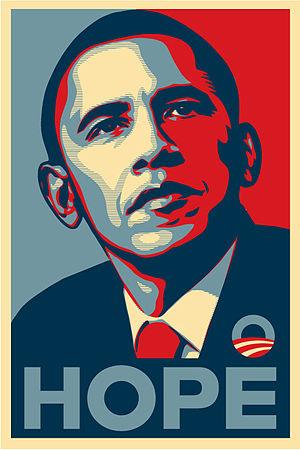 Read this story back around 1968 or so in
Esquire Magazine.

“The Day It All Happened, Baby!” by Robert Thom

Made into a movie WILD IN THE STREETS.

I am surprised animal rights activists haven’t demanded that dogs and cats be allowed to vote.

Of course we should only allow them to vote if they have licenses and are registered.

If they can vote they can be tried as adults. No more consideration for ‘youthful indiscretions’.

Why stop with voting? Let kids drive, drink liquor, and have sex with anyone, including adults. /sarc

According to the article, they are advocating for that third item.

12 posted on 05/26/2021 10:47:39 AM PDT by a fool in paradise (Lean on Joe Biden to follow Donald Trump's example and donate his annual salary to charity. )
[ Post Reply | Private Reply | To 9 | View Replies]
To: Ruy Dias de Bivar
Instead of LSD camps for the adults the new kid order will send us to Uighur like reeducation camps to ingest BLM, tranny and climate change propaganda 24/7. 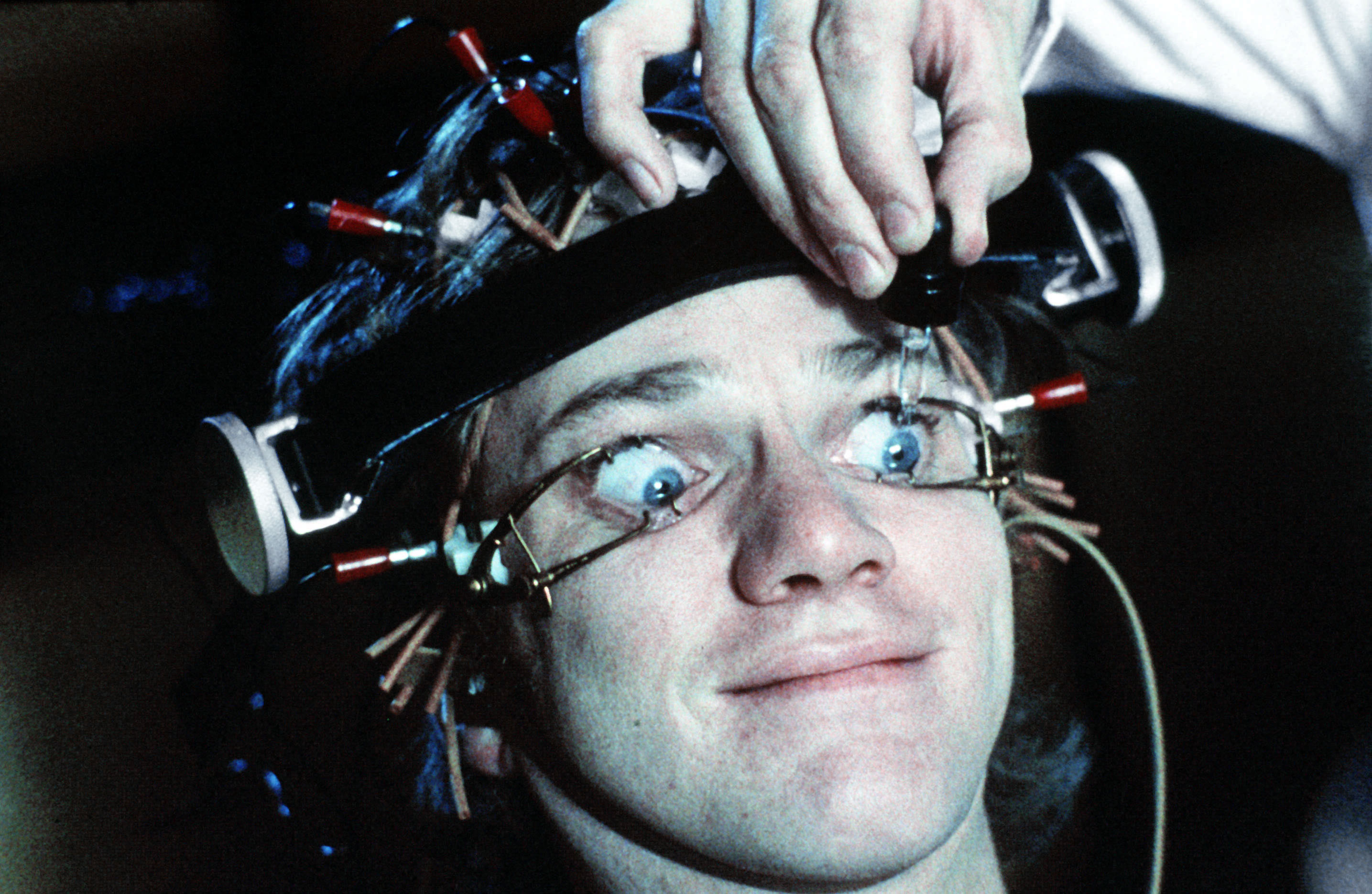 How about only white male real property owner are allowed to vote? That would work for me.

Note the support of ending age of consent and pedophilia laws.

Better to raise the age to 25. Unless you have military service. Also, must have had a job in the private sector.

We’d all do better moving the voting age up to 35.

God help us. I am actually serious. Our society is imploding.

What a great idea. The next German Chancellor could be 10 years old.