A 26-year-old Madison man has agreed to plead guilty to the attempted arson of the City-County Building during destructive protests on June 23 that led to the toppling of two statues Downtown, court documents show.

Under a plea agreement filed Monday in U.S. District Court in Madison, Marquon M. Clark would face between six and nine years in federal prison, to run at the same time as a state prison sentence Clark is serving, and pay restitution of $105,171. He is accused of throwing a flaming roll of paper towels into a window of the City-County Building, starting a small fire in a city engineering office during the early-morning hours of June 24.

Under the agreement, Clark could withdraw his guilty plea if U.S. District Judge James Peterson, who is assigned the case, does not agree with the sentencing terms. A date has not yet been set for a plea hearing.

Without a plea deal, the maximum sentence for the arson charge, if convicted, would be 20 years in prison, along with a $250,000 fine and three years of supervised release. The mandatory minimum sentence is five years.

Clark, also known as “Sire Gq” by fellow protesters, was identified in numerous surveillance videos and photos, including video he took himself, as a person seen throwing the burning paper towels through a broken window of the CCB, according to an affidavit from the federal Bureau of Alcohol, Tobacco, Firearms and Explosives.

The resulting fire set off an alarm and was extinguished quickly, but it forced the evacuation of the 911 dispatch center, delaying the acceptance of 911 calls for a time.

At the time the fire was set, there were more than 250 people in the CCB, including jail inmates. Damage to the building and cleanup was estimated to cost about $105,000. A photo included in the affidavit shows minor fire damage to a corner of a room in the building.

At the scene, police also found a clear plastic water bottle with a burned wick in the neck of the bottle, outside the CCB near where Clark had been standing, the affidavit states.

Investigators also used a receipt from purchases Clark allegedly made of the shirt and shoes he wore during the incident, DNA from a hammer found at the scene and other evidence to implicate Clark, the affidavit states.

A few hours before the alleged fire-bombing, protesters toppled the statues of abolitionist Col. Hans Christian Heg and the figure called “Forward,” which represents women’s rights. Clark, along with others, has also been charged with taking part in pulling down the statues. Those charges against Clark are still pending. Clark was one of the protest leaders that night.

Clark was under supervision with the state Department of Corrections at the time of the protest because of past unrelated convictions in six felony cases and one misdemeanor case. In October, Clark was sentenced to five years and eight months in prison after DOC revoked his supervision.

If the judge accepts the plea agreement in the arson case, Clark’s sentence would run concurrently to the sentence for his revocation, meaning he would spend a minimum of six years in prison for the state and federal convictions.

Clark remains in the Dane County Jail while he awaits transfer to prison. 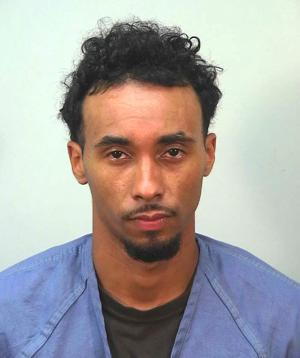 What I find most amazing? This is actually a relatively fair and balanced report of what happened!

He was called a PROTESTOR, not a RIOTER, though. However, that says a lot considering this IS ‘The People’s Republik of Madistan.’

I don’t think these criminals deserve ANY plea deals. You broke it, you bought it, Jerk!

Throw the book at the bastard...he failed!

Guarantee you he isn’t Norwegian—Polish—German—or Swedish

I am impressed they caught him! From the grainy surveillance video it would have been impossible to identify him, but this idiot felon left his DNA at the scene of the crime.