The Associated Press cheers ruthless authoritarianism: According to AP, if you want to get rid of the Wuhan virus, the Chinese approach is the way to go
American Thinker ^ | 12/16/2020 | Andrea Widburg

Ken Moritsugu, of the Associated Press, wrote an article that, while bemoaning China’s initial secrecy about the Wuhan virus’s origins within its borders, seemingly applauds the ruthless power it applied to bring the virus to an end. It’s almost as if Moritsugu is trying to set the table for a new administration to really crack down on lockdown and mask scofflaws in America.

Whether or not Moritsugu wrote the headline for the AP article, it certainly sums up the article’s tone: A pandemic atlas: China’s state power crushes COVID-19. The opening paragraph dives right in to let us know that China’s back in business:

Workers have returned to factories, students are back in the classroom and once again long lines form outside popular hot pot restaurants. In major cities, wearing a surgical mask — though no longer required outside of subways and other crowded places — has become a habit.

The article explains that China is pulling back on the throttle a bit so that normal life can resume. It never questions that, in China, normal life always means that the government is cracking down on individual liberty. The article also accepts that, if the Wuhan virus dares appear again in China, it can only be an “imported case[].” Sounds like propaganda to me.

To its credit, the article acknowledges that China initially engaged in a cover-up and that, after “ravaging the city of Wuhan,” the virus then “seep[ed] out to the rest of China and overseas.” While the authorities initially “squelched warnings about the outbreak,” once the Communist Party figured out there was a problem, “it moved decisively.”

Moritsugu reminds readers that the CCP locked down, not just the city of Wuhan (population 11 million) but also the whole of Hubei province.

TOPICS: Culture/Society; Foreign Affairs; Government; News/Current Events
KEYWORDS: associatedpress; authoritarianism; china; coronavirus
Since then, he says, the CCP says that its one-party rule made possible its success in holding back the virus. “And,” he adds, “in a sense, the crisis illustrates the strength of the system, and its dark side.”

It states only in conclusory language that

The virus has been kept at bay — but only because of the government's power to dictate monumental changes, and its willingness to use surveillance and censorship to control its people.

2 posted on 12/16/2020 6:07:38 AM PST by HighSierra5
[ Post Reply | Private Reply | To 1 | View Replies]
To: SeekAndFind
Workers have returned to factories, students are back in the classroom and once again long lines form outside popular hot pot restaurants. In major cities, wearing a surgical mask — though no longer required outside of subways and other crowded places — has become a habit.

Hey, Dumbass Moritsugu: Hate to tell you but the Chinese ALWAYS wear masks. Hmm. Didn't help to prevent the spread of the Wuhan Red Death, did it?

I WILL NOT COMPLY!

the Chinese approach is the way to go

For months Pelosi has said, Trump’s covid bill “does not crush the virus”, which struck me as ridiculous and meaningless. Other than Warp Speed and national determination there is no crushing the virus.

This article tells us what “crush the virus” meant and where it came from. The authoritarians changed 15 days to a year economic shutdown, because they want heavier jackboots on America from Trump. Create massive problems during his term he could be blamed for (like the unrest, riots, etc.) He took most of the bait on shutdowns, promising stimulus to fill the holes, then Pelosi pulled the stimulus football away. Did not take the bait on involving himself in riot control except to blame the Dem city and state goverment for encouraging it.

Now same strategy, but to hurt Trump, the US generally, and benefit China directly.

Does that include welding people inside their apartments? 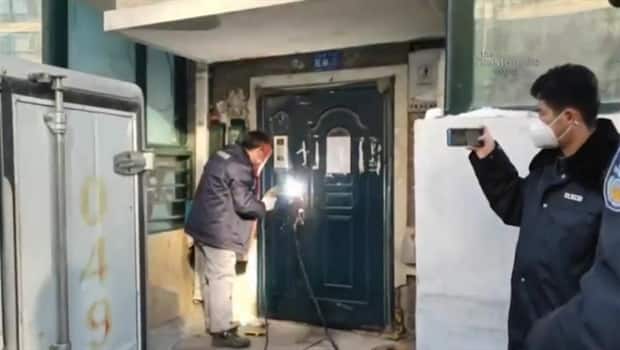 The Chinese model is to kill anyone that disagrees with you. Do the lefties really think that is a good idea? They won’t be in power forever, and some rational people don’t care even if they ARE in power.

America was fortunate when Hitler, a psychotic, forced a reluctant military into war before it was ready... As it was, he stood the allied republics off for over five years. China is not interested in rash moves without thorough preparation, especially while America is tearing itself apart due in large part to Chinese activity. The article, whether intentional or not, is just another dire warning as to what we face.

ARE there ANY correct numbers of Chinese dead from virus???

If people want believe that in all of China there are only 3 serious cases of Covid, and only 12 new cases among
billion, 439 million+ people [12/16/20 - 9:25AM https://www.worldometers.info/coronavirus/#countries], then that is up to them. Meanwhile basic Ebay items I order from China that normally take 2.5 weeks are up to 10 weeks and waiting.