Recent weeks have witnessed once again radical Islamist attacks in Europe, ostensibly, aimed to intimidate and stifle free speech in multicultural Europe.  This time, the targets were France and Austria.  For Vienna, it was a traumatic experience; the city is not used to such violence.  Austria has not been a targeted by Islamic terrorist in recent times.  The motive of the Islamist killers, like that in France, was apparently outrage over cartoons of the Prophet Mohammad.  The killers in both countries pledged their loyalty to the Islamic State.

The original excuse for the Islamist perpetrator of the heinous murder of schoolteacher Samuel Paty in suburban Paris, France, was the showing schoolchildren the Mohammad cartoons, originally produced by the Paris magazine Charlie Hebdo.  For this “crime” he was beheaded.  This brutal murder outraged France, Europe, and much of the free world.  The Islamist attack on free speech was followed by a murder in Nice, France, of three innocent worshippers in a church, which the French government described as an “Islamic terror attack.”

For French President Emmanuel Macron, upholding the values of free speech in a democratic nation, which is at the very core of the French republic, he was labeled “islamophobic,” by the Turkish Islamist dictator Recep Tayyip Erdogan, and other Islamic leaders. Erdogan moreover, questioned Macron’s “mental health.”  The reaction to Macron’s natural response to the brutal assault on free speech and the heinous murder of Samuel Paty, was widespread and massive demonstrations in many Muslim majority states.

The Austrian Chancellor (or Prime Minister), Sebastian Kurz, promised “decisive action against the perpetrators of this hideous terrorist attack,” that killed three people and injured many more.  The attack occurred next to Vienna’s main synagogue.  The synagogue, named Stadttempel, was the target of a terror attack almost four decades ago. On 29 August 1981, two members of the Palestinian group Fatah – The Revolutionary Council, also known as ANO – tried to storm the synagogue building but were stopped by security forces. Two people were killed and 21 others injured in the attack.

At a press conference immediately following the attack Chancellor Kurz said, “We are currently experiencing difficult hours in our republic. I would like to thank all the emergency forces who are risking their lives for our safety, especially today. Our police will take decisive action against the perpetrators of this repulsive terrorist attack.”  The Viennese police managed to kill one of the Islamist terrorists, in searching the body they found an explosive belt usually worn by suicide bombers, and a bag full of ammunition.   Additional terrorist(s) managed to escape.

The Europeans have now realized that the Covid-19 epidemic is not their only problem. European leaders must now be compelled to face up to the reality that appeasing their Islamic terror, whether coming from al-Qaeda, Islamic  State, Iran’s mullahs, Hezbollah, or Palestinian terrorists, does not work.  Their national security is in jeopardy not only from outside groups but from within individual European states.  The uncontrolled massive immigration into Europe from majority Muslim states has created a violent cultural and religious divide.  Many native Muslims are radicalized by fanatical imams in mosques and in prisons.  They are refusing to integrate into European life, and adopt its liberal values.  To defend liberal European values against radical Islamist terrorists does not mean being against Islam or peaceful Muslims.  Political Islam however, is a violent ideological enemy, which hides behind the façade of religious freedom.  The European elites, particularly those within the European Union (EU), have made sensitivity to all manifestation of Islam sacrosanct.  Leftist European political parties have been the home to many of their Muslim citizens, their silence over Islamist excesses is at times deafening

Targeting Islamists and their narrative, as France and Austria finally found necessary, is not being anti-Muslim or racist, just as being anti-Nazi is not anti-German.  President Macron’s government strong statements, which were followed up by action, including the closing of radical mosques, and organizations with ties to the Muslim Brotherhood (previously funded by the French government), their affiliates and offshoots is a step in the right direction.

In his emotional eulogy for Samuel Paty, Macron declared, “This evening I won’t speak about the fight against political, radical Islamism, which leads to terrorism. I’ve said what I had to say. I’ve given the evil a name. We’ve decided what action to take; we’ve made it tougher and will complete it.”  Macron continued, “Samuel Paty was killed because Islamists want our future and because they know that with quiet heroes like him, they will never have it. They divide the faithful and the unbelievers.”  He added, “Samuel Paty became the face of the Republic, of our determination to disrupt terrorists, to curtail Islamists, to live as a community of free citizens in our country; he became the face of our determination to understand, to learn, to continue to teach, to be free, because we will continue to do so, sir.  We will defend the freedom that you taught so well, and we will strongly proclaim the concept of laïcité (secularism).  We will not disavow the cartoons, the drawings, even if others recoil. We will provide all the opportunities that the Republic owes all its young people, without any discrimination.”

Marine Le Pen, President of the Rightist political party The National Rally (formerly the National Front), will challenge Macron in the 2022 national elections.   Le Pen, known for her longtime opposition to Muslim immigration into France (and Europe), had this to say in reaction to Samuel Paty’s beheading, “The situation calls for a strategy of reconquest.   Islamism is a bellicose ideology whose means of conquest is terrorism.”

France’s past appeasements of Islamic majority governments, and leniency towards Islamist and Palestinian-Arab terrorists, including the release of Abu Daoud, the mastermind of the 1972 Munich Olympic Games massacre of 11 Israeli athletes, only encouraged more terror.  In the last decade alone several Islamist attacks occurred in France.  The January 2015, Charlie Hebdo and the Kosher supermarket attacks in Paris, followed by the November 2015 attack on the Bataclan theater also in Paris.  On June 14, 2016, a Islamist truck driver deliberately sped into hundreds of pedestrians in Nice, celebrating Bastille Day, killing 86, and injuring more than 400.

France, Austria, and Europe as a whole, must now initiate policies that clearly advance the interests and values of Europe.  The Muslim migrants and others would do well to accommodate to the majority European way of life, and the extremists among them expelled to their native countries    The Europeans on their part would do well to restore their national and cultural pride.  The 20th Century nationalism that had catastrophic consequences for Europe notwithstanding, Europe’s multiculturalism of today has created the cultural division.  America had once successfully executed the “melting pot” policies, which made immigrants proud Americans, Europe can do the same. 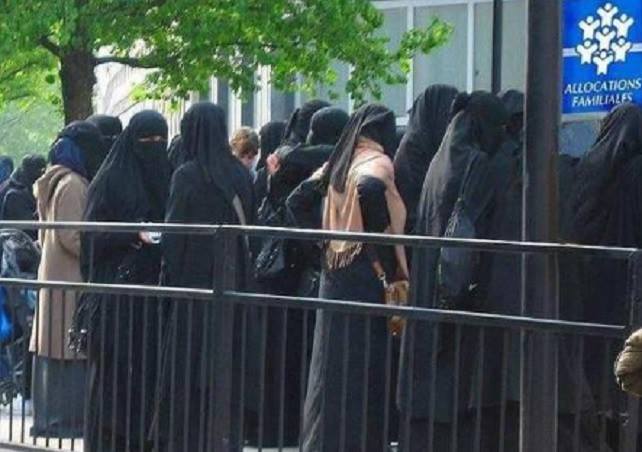 with NPC “Biden” at the helm, Islamic terrorism will return to our shores.

The Strategy of Islam to Infiltrate and Dominate a Host Population

- Once they have merged in the host country, Islam demands respect for its customs by the host population

- When outnumbered, they will appear as the victim. When they obtain the majority, they become the aggressor

- Once Muslims move into an area, they spread into the social fabric through the establishment of mosques, by the economic through stores in every part of the city to bring Muslims into areas once dominated by only the host population, the use the political sphere to get Muslims elected into local, then state, then federal offices by sheer numbers in order to take over the entire social, economic, and political host through the protection of what is defined as a religion

Islam more commonly fits the definition of a virus: a small infectious agent that can replicate only inside the living cells of organisms. Most viruses are too small to be seen directly with a light microscope. Viruses infect all types of organisms...

4 posted on 11/18/2020 6:57:59 AM PST by Liz (Our side has 8 trillion bullets; the other side doesn't know which bathroom to use. )
[ Post Reply | Private Reply | To 2 | View Replies]
To: dennisw; Cachelot; Nix 2; veronica; Catspaw; knighthawk; Alouette; Optimist; weikel; Lent; GregB; ..
Middle East and terrorism, occasional political and Jewish issues Ping List. High Volume If you’d like to be on or off, please FR mail me.

Reminds me of this in Judges 6:31 when Gideon tore down the altar to Baal and the people wanted him killed.

KJ21
And Joash said unto all who stood against him, “Will ye plead for Baal? Will ye save him? He that will plead for him, let him be put to death whilst it is yet morning. If he be a god, let him plead for himself, because one hath cast down his altar.”

If allah has been offended let allah plead for himself if someone has offended him.

Allah is not a true god as he needs the weak arm of his followers to do his own dirty work.