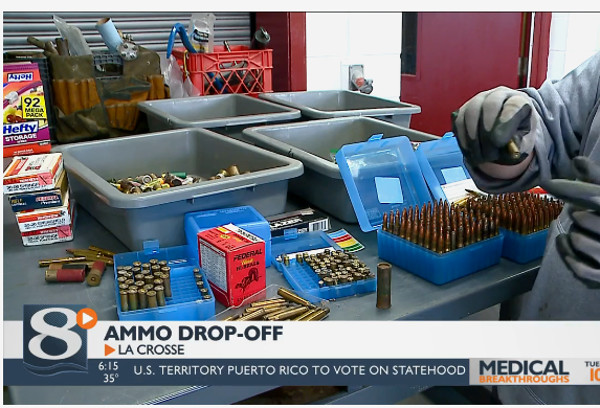 Screenshot from news8000 video, cropped and scaled by Dean Weingarten

On Saturday Morning, from 8 a.m. to noon, 24 October, 2020, the La Crosse Wisconsin landfill accepted ammunition from people who did not want it, and wished to dispose of it with them, rather than giving it to neighbors or friends.

La Crosse is located on the Mississippi river, and is in the heart of prime Wisconsin deer and pheasant hunting territory.

Fox squirrels abound in the woodlots bordering the cornfields common in the Wisconsin countryside. Geese are so plentiful, they have become a pest. The Mississippi flyway brings large flocks along with abundant local production.  Shotguns and .22 rimfires are commonly used to hunt the squirrels.  Only shotguns may be legally used to hunt waterfowl and other game birds.

I visit Wisconsin on a regular basis. Every little pond and pothole has its resident Canadian goose population. Wild turkey populations have exploded. They are common in urban wood lots and have become a pest where hunting with firearms is banned.

At the same time, the nation is in the throes of an ammunition and gun-buying spree as never experienced before. Many calibers of ammunition are difficult to find on store shelves. At this time, La Crosse County, Wisconsin, decided to accept ammunition that people no longer wanted. From news8000.com:

“Our most frequent request for ammunition disposal comes from people that find it, or are left behind by loved ones, and maybe it’s been sitting around for decades and they just don’t know what to do with it. We’re able to collect it and manage it for proper disposal, and solve a problem

Not much ammunition turned in to be destroyed.

I know how to dispose of old ammo. You put it in a rifle and pull the trigger.

Decades ago in Tampa, within a week or so of each other, two WWII vets died. Their widows discarded their war souvenirs in the trash. Each had an unneutered artillery shell. Welllll, artillery shells don’t like getting compacted. The government and the media saturated the area with TV stories, newspaper ads and flyers to help people identify unexploded ordinance. I don’t recall any injuries but there were two garbage trucks totaled. (Probably a couple of sanitation engineers needed new pants.)

That is the only thing I’d consider giving away. I inherited some boxes of foreign ammunition for guns I did not own. I asked around and found eager takers.

They’ll probably take most of it home.

“Every little pond and pothole has its resident Canadian goose population”

Canada geese named after John Canada, the ornithologist and taxonomer who distinguished it from other species of geese.

Few get this right.

Well he can have them back.
They have gone from threatened to vermin in a few decades.

As an MP officer at Ft. Riley, I was friends with the EOD detachment commander. He told me of a time when a family in Junction City had found an explosive artillery shell in the attic of their home. He told me it was from the 19th century and had probably been there since the early days of the fort which had been established in 1853. They were able to safely transport it to the installation demolition range and blew it there.

Well, they did keep their powder dry. smile.

Some of the really old stuff use corrosive mercuric primers which will eat up the bore if you don't clean the rifle very soon after firing.

BUT I just sold a full box of 6mm Lee-Navy for $600 so some of the old stuff can be quite profitable.

Note the heavy gloves of the guy handling the annunition. Head Shake.

And for note, I have some really old shot shells that I would not dare fire in a shotgun now. The powder can explode faster after long shelf life.

My dad gave away some .348 ammo because it kicked so badly in the Model 72 Winchester to want to shoot it. (was pretty hard to find at the time)

I bought some new brass, reloading dies and bullets for that rifle. I bought the Hornady Lever Evolution bullets to reload it.

I believe that's an urban legend. Earliest reference to Canada Goose is around the mid 1700's.

I live down the road in Manhattan. Take care and be safe.

Most get this right.

True, and even some recently produced ammo has value to collectors. Back in the '90s, I bought a bunch of PMC .38 Special ammo that was on sale ($6 a box), for 'plinking' with a Marlin .357 carbine. If I remember right, it was an unusual design with a 66 grain tubular copper "ring airfoil" bullet; shot so flat in the Marlin that I ran out of adjustment on the rear sight. It wasn't produced for very long, and a few years later, I sold the few boxes I had left to a guy who worked at Aberdeen Proving Ground, for $50 a box...

“We’re able to collect it and manage it for proper disposal, and solve a problem...”

How about selling it to the public ....dumshit.