When 100% of the Democrats vote against Amy Coney Barrett, What Does It Tell Us About Their Convictions and Ideology?
Christian Post ^ | 10/30/2020 | Michael Brown

What should we think when every single Democrat voted against the Supreme Court nomination of Amy Coney Barrett? What does this say about their convictions and ideology?

There were actually three Democrats who voted to confirm Neil Gorsuch in 2017 (Donnelly, Heitkamp, and Manchin). Even Brett Kavanaugh received one Democratic vote in 2018 (again, Manchin).

But when it came to Barrett, not one Democrat voted for her. Not one.

This happened despite her receiving a “‘Well Qualified’ rating from the American Bar Association (ABA) whose representatives relayed descriptions of her as ‘brilliant’ and an ‘intellectual giant.’”

And this happened despite there being no allegations of sexual impropriety to dog her, as with the attacks on Kavanaugh.

The senators should know that, when the president and Senate are of the same party, they have consistently voted to appoint new Supreme Court justices during election years. So, this was hardly an unprecedented move.

And, while some senators might honestly believe that Barrett would vote to deprive millions of Americans of healthcare, I would dare say that, for others, this was simply a political talking point.

No, the stark reality is that, on this historic day, when a highly-qualified woman was appointed to take the place of the iconic Ruth Bader Ginsburg, not a single Democrat could be found to vote for her.

Let the record be remembered for posterity.

Gone are the days when someone like Justice Ginsburg could be confirmed by a vote of 96-3. Or Justice Antonin Scalia by a vote of 98-0. Obviously, there was much more bipartisanship on both sides in the past.

But, reviewing the voting of the last 40 years, it’s clear that it is the Democrats who have dug in their heels against conservative justices rather than Republicans doing the same with liberals. (I’m talking about actual votes, not refusing to nominate a new judge during a divided election year.)

As for Robert Bork, he was infamously rejected (“borked,” to be precise), by a vote of 42-58. (As Frank Turek recently pointed out, had Bork, not Kennedy, been appointed to the court, Roe v. Wade might have been overturned in 1992.)

Under George H. W. Bush, David H. Souter was confirmed 90-9 while Clarence H. Thomas, after a tumultuous hearing, barely made it by a vote of 52-48. The pattern is crystal clear.

Both of Bill Clinton’s nominees were confirmed with ease. Ginsburg, as mentioned, by a vote of 96-3 (despite being famously progressive) and Stephen G. Breyer by a vote of 87-9.

Under George W. Bush, John G. Roberts was confirmed 78-22 while the more conservative Samuel Alito had a much tougher battle, getting in by a vote of 58-42.

Under Barack Obama, and in a time of deep political divide, his two nominees were still confirmed with relative ease, Sonia Sotomayor by a vote of 68-31 and Elena Kagan by a vote of 63-37. And did anyone really wonder how these new justices would rule?

It is true that the Republicans stifled Obama’s attempts to appoint Merrick B. Garland to the court. But, as mentioned, that has happened before during election years when the White House and the Senate were controlled by different parties.

But, when it comes to overall voting patterns, despite the known liberal proclivities of the Democratic nominees, the Republicans have focused more on the legal suitability of the nominee rather than the ideology of the nominee.

Thus, there is no Republican parallel to the voting tallies for the three justices nominated by President Donald Trump: Gorsuch, 54-45; Kavanaugh, 50-48; Barrett, 52-48.

Neither is there a parallel to the borking of the great legal scholar Robert Bork nor to the vicious attacks and then narrow confirmation of Clarence Thomas.

I’m quite aware that both political parties are flawed and that the political system itself is marred by greed, lust for power, backroom deals, and corruption.

I’m also sure that different constituents can point to different strengths and weaknesses within each party.

Surely, the Republicans are not all good and the Democrats all evil. Not a chance.

But when it comes to some of the greatest issues of our day, issues that touch on our most fundamental freedoms, on the definition of marriage, and on the sanctity of life, the Democrats have been making their positions clear.

Now, they have spoken with one voice in their unanimous opposition to Justice Amy Coney Barrett. As summed up in the words of “nay” voting Democrat Mazie Hirono, “hell no.”

Let the record, and these words, be remembered for posterity.

And let the record, and these words, be remembered on November 3.

The Democrats have spoken.

Michael Brown holds a Ph.D. in Near Eastern Languages and Literatures from New York University and has served as a professor at a number of seminaries. He is the author of 25 books and hosts the nationally syndicated, daily talk radio show, the Line of Fire.

Madeleine Albright: “There is a special place in hell for women who don’t help other women.”

RE: Madeleine Albright: “There is a special place in hell for women who don’t help other women.”

What church did she form?

“The senators should know...”

Of course they do, but most voters do not know.

The Democrat Party is morally bankrupt and worse...

If someone tells me they are a democrat today, I deduct
50 IQ points from the get-go.

You have to be a complete blithering idiot to think that
party deserves your support.

Why not just take a knife out of the drawer and stab
yourself, heck your family, friends, community members
too? Same difference.

It tells us they hate the Constitution, but we already knew that when they put the Kenyan from Indonesia in office.

What excuse does the GOP have for going along?

In 2020 the Democrats have become the Borg Collective.

They will continue to vote in lockstep based on 100% ideological fealty.

West Virginians who continue to have visions of Joe Manchin voting with us need to put down the bong.

I tell people this ain’t your grandparents democratic party

Progressivism (leftism, cultural Marxism) is a religion, maybe a cult, and D’rats are progressive zealots.

ACB is a woman who, by her strong Christianity, morality and motherhood, is considered a terrible infidel by the left. Her womanhood means nothing. Never has to D’rats; they only care about how women vote.

There was a reason why we were all very happy to push this confirmation through before the election so that she would rule on those terrible lopsided ruling by those judges in Pennsylvania North Carolina etc. Then she turns around and pulled a freakin Sessions’. honest I’m very disappointed I’m angry and both Kavanaugh who we helped fight for his confirmation and now this witch both can go kiss Pelosi’s ass! This is about the survival of America. This was the most important appeals for the survival of this nation! And she along with Kavanaugh pull a Sessions! I am so angry! Again Trump was bamboozled! He was warned about her though ...can’t say he wasn’t .

The Church of Global Progressive Control

IS there no sense of history?
All you have to do is look at how Democrats have treated ‘Pubbie SCOTUS nominees all the way back to Clarence Thomas. 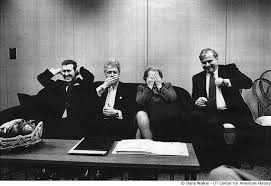 What it really tells us is what dimwitted chumps the Stupid Party was all these years when they voted for judges they wouldn’t have lunch with because it was “the honorable thing to do”.

What a bunch of rats**t. The Gangster Party laughed their butts off at the Klueless Kaspers who believed such fuddy duddy crap. And then proceeded to beat the crap outta them in the courts.

Or the Kennedyism that went on against Robert Bork. Don’t let them call it “Borking”. Name it for the power mad evil mad who did it.

Like many on the left it’s called “The Church of I Make It Up As I Go Along”. It has quite the following. The key is, take any religious book and twist it to fit what you want. Be sure to quote things out of context or make things up if you can’t find a suitable one. Just make sure the grammar sounds appropriate. If someone complains that you are wrong, just remind them they you are smarter than they are and it’s they that are wrong.

Using that method, you can turn the act of human sacrifice of unborn babies into a woman’s health issue. You can get other churches to agree that homosexual behavior is not an abomination, it’s an act of bravery. The list goes on.

This is what I sent both my useless senators:

As expected, and not surprisingly, instead of being a champion of women’s rights and gender equality, you chose partisan politics over substance and constitutional duty and voted “NAY” on Judge Barrett’s confirmation. How embarrassing for you and even more so for the great state of Nevada. Seems like you do NOT represent all Nevadans after all.

Had to toss in the ‘gender equality’ and ‘women’s rights’ thing since they are both females. Probably won’t hear back from either of them.