The Media Needs the Biden Scandal to End as Much as Joe Biden
Townhall.com ^ | Octobewr 29, 2020 | Brad Slager

As the Joe Biden/Hunter Biden/laptop scandal continues to gradually unspool it is becoming clear that along with the desire for the candidate to have this all end one other entity wishes it as well - the press. Since word broke of this trove that appears to be a powder keg of evidence most journalist outlets have gone to great lengths to not report on the story. It is not hyperbolic to say this could be a decision of lasting damage for many in the media.

The surprise in all of this is not that the media outlets have chosen a side -- that is regarded as a given by many -- but in how brazen they have become in their stance on this story. It has appeared in many instances they are working as hard on justifying why they avoid working on this than it would take to actually cover it. The press makes little effort anymore in attempting to cover their preference for one candidate. This manifested in a most innocuous story.

During a video conference for the campaign on Sunday Biden made one of his endless strings of verbal pratfalls. He was attempting to draw a picture of what would happen if he does not win, but mangled the words. "What kind of country are we going to be? Four more years of George — George, uh, he, we're going to find ourselves in a position where if Trump gets elected, we're going to be in a different world."

Once this got out on social media many commented that Biden thought he was running against George Bush, but a number of outlets rushed to cover for Joe. Many explained that the event was being hosted by comedian George Lopez, so that was who he was referring to, making an honest slip up. This small event shows both the lengths the press will go to burnish the image of Biden, and the danger this practice entails for them.

The media is going well beyond their charged duty of delivering the facts and the news. Here they are taking extra efforts to mold the news narrative, editorializing as to what actually happened. This is not their job on a campaign, and it shows the pitfalls for them. This correction, as it were, does not help Biden’s cause, but it damages that of the press corps. If what we are being spoon fed is accurate -- that Biden was in fact referring to George Lopez -- this still means Biden was bumbling, because now he was indicating that he was running against the comedian for the presidency. Joe not only still looks doddering but also the press appears foolish.

The real crime though rests in the behavior with the major news story, that of Biden’s potential international corruption. As the revelation of the laptop abandoned by Hunter Biden arose most major news outlets took the stance of not delving too deeply into the matter, on the basis that it was too speculative of a story. This was perfectly displayed in the tape of Leslie Stahl telling the president they will not touch the story of the laptop because ‘’This is 60 minutes, we can not air unverified stuff.’’ That’s a change in standards, from the program that ushered the demise of Dan Rather’s career over an unverified story.

But while the press might have had an excusable dodge in declaring that ethics prevent running a story before it is vetted, they have blasted that stance into confetti after a four-year campaign of covering the unverified Russian collusion story. But they also are wounded by other realities. Sure, the story may be unverified, but that does not excuse them from looking into the matter to determine if it is verifiable, or not. NPR, as one example, has come out and declared it will not even entertain the idea of investigating. That is rather convenient; if you do not look for proof you will not find proof, thus you can then declare the lack of proof as your reason for not looking for it...it seems. But there is worse damage the press has done to itself.

In its desire to protect Biden the media complex had gone to the extent to declare that not only was the story possibly fraudulent, they leaned on the standby that this had all the earmarks of a Russian disinformation campaign. Numerous outlets pronounced how Russian fingerprints were all over this story, even declaring the administration was possibly working in tandem with the Russians to spread this scandal. It is something Biden had even invoked at the last debate.

Here is where the press has fallen into its own spike-riddled trap. The journalists are loudly stating they cannot run the laptop story because of the lack of concrete evidence, yet at the very same time they are boasting loudly that Russian interference is likely at play, despite zero evidence indicating this to be the case. None. Let us digest this...they will not report on Hunter’s computer without evidence but they will cite Russian involvement, without evidence - in regards to the exact same story. This bifurcated standard is an amazement to behold for anyone not polluted with a fatal dose of bias.

For many in the press they are so intently focused on a goal they cannot step back and see any perspective on their words and actions. Yesterday Ben Smith of the New York Times attempted to clarify things from the perspective of the press, and in the process exposed the very problem we are observing. When another facet of the Hunter Biden story came out - details on how he leveraged his family name and the influence of his father’s office, something Joe has been steadfastly denying -- Smith replied in a fashion intended to lend clarity to the issue.

His attempt to lessen the impact was in a tweet, where he informed that in fact his paper had already covered this detail. ‘’This was, by the way, reported two days* ago, in proper context, in the ...@NYTimes’’ He then followed this up with another tweet, linking to another Times piece from 2017, reporting that Jared Kushner’s sister was leaning heavily on the Trump name in a business meeting she attended in China. That Ben could not see himself tripping over the double standard is amusing.

His Biden explainer was an excerpted paragraph, from deep in a piece, and -- as he says -- it was there to clarify the details by placing them in ‘’the proper context’’. The older Kushner story? The announced leverage is blasted in the headline -- Jared Kushner’s Sister Highlights Family Ties In Pitch To Chinese Investors. One is worthy of banner headlines, the other gets buried deep in a piece and lent perspective in order to reinterpret what took place.

These are the desperate actions the media go through in order to report, or not report, on a story, in order to deliver their desired result. We have reached the point now that as this scandal blossoms it is not only Joe Biden who faces accountability. The media complex has placed themselves in a position that if the facts break in a particular fashion they will have severely damaged reputations -- even worse than they already experience.

The media is totally corrupted, on display for all to see. Bobulinski came off as totally credible. We’ve officially entered ‘Banana Republic’ status ...

Why does ATT & Comcast want Biden to win so badly?

The investigative reporters of 60 Minutes won’t even look at a story until it is 100% verified and the law courts have declared someone to be either innocent or guilty. Once that level of verification is achieved, then it’s OK for investigative reporters to let people know about the story. I mean, if the crook is a Democrat, that is.

I doubt they do but they're being extorted by the DNC.

The enemydia needs to be crushed. Remove their FCC licenses, press privileges, and federal funding. Make them register as lobbyists for foreign countries. Also, no enemydia employee is to retain any U.S. security clearances. 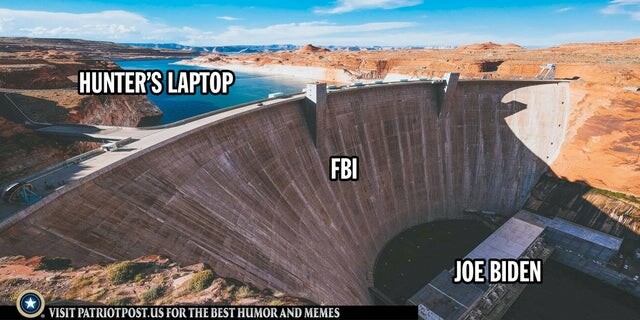 Let’s be careful when describing the Media unfavorably because conservative public voices are truly part of the media.

I mean Limbaugh, Townhall, OANN, etc. There a lot of them and they’re getting the truth, or at least their side of the story, out to a large audience.

We would all be better off if the Bidens of the world would “end”...:)

They just released text messages between Hunter and his 14 year old niece at the time Natalie and it’s looking really bad, folks.

If Biden wins, it is open season on all who work for the MSM down to the level of mike holders and clerks. All are our existential enemies

We live in Orwellian times.

There is another side to this that is being ignored by just about everyone. It is this: exactly how prevalent is this type of scheme in the American political world?

There have been the barest whispers about this as it relates to Pelosi’s and Romney’s relatives. Indeed, the MOST interesting question about all of this is about how far down the rabbit hole it all goes. Personally, I wouldn’t be surprised if it were almost universal amongst both parties.

Some enterprising reporter could really make a name for himself if he really went out and started connecting all the dots.

16 posted on 10/29/2020 7:34:17 AM PDT by zeugma (Stop deluding yourself that America is still a free country.)
[ Post Reply | Private Reply | To 1 | View Replies]
To: zeugma
Some enterprising reporter could really make a name for himself if he really went out and started connecting all the dots.

... which kind of explains the lack of reporters such as that.

I didn’t mean to be critical. What I said applies to me too.