If you pay attention only to the polls and the mainstream media narrative, you’ll believe that, even though the presidential race is tightening, Biden still maintains a lead and can handily win the upcoming election. However, if you look at the information on the Twitter feed of Ronna McDaniel, the GOP Chairwoman, you’ll see an entirely different story and one that is more in sync with Trump’s well-attended rallies compared to Biden’s anemic afternoon teas.

Today, Joe Biden shuffled out of his basement for another one of his “rallies.” It was an embarrassment:

Meanwhile, Donald Trump is doing two to three rallies a day, every day, and looking more vibrant and alive with each passing appearance before tens of thousands of people.

The interesting question, and the one the mainstream media would prefer you don’t ask, is who are the people attending Biden’s rallies? As was the case in 2016, the Trump campaign and the GOP are paying close attention to the people showing up. Here’s data that McDaniel published from the last several Trump rallies. In tweet after tweet, pay attention to the number of non-Republicans at the rallies and the number of people who did not support Trump in 2016. The Midwestern numbers are extraordinary.

OHIO is ready to re-elect @realDonaldTrump!

Our supporters in NEW HAMPSHIRE are ready to turn the state red for @realDonaldTrump!

While Joe Biden holds ZERO events today, @realDonaldTrump is firing up supporters all across PENNSYLVANIA! From his first rally: 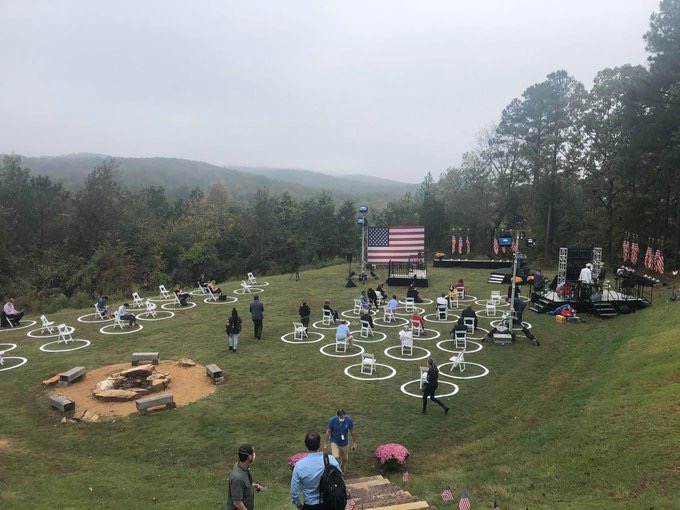 Thank you to everyone who turned out!!
— Ronna McDaniel (@GOPChairwoman) October 26, 2020

Another great turnout for @realDonaldTrump in PENNSYLVANIA:

President @realDonaldTrump won Michigan in 2016 by bringing new voters into the fold, and today’s crowd shows he is doing it again!

omg! not even all of those sparse chairs are filled! They were overly optimistic with the chair order. haha!

Biden was campaigning in Georgia. This is 2016 redux, their internals must be shat. He is going to lose so they pull the “Expanding the map” bullcrap. McDuck did it in 2008 with his trips to California. What a losing campaign does...burn through the cash with nonsensical stops to get a few more paid junkets of free hotel rooms, booze and food. Hillary did this in 2016 when she knew she was going to lose a week out.

THAT is embarassing. I’ve done a bit of public speaking. My audiences have been larger than that.

Not all of those chairs are filled.

A big game of Twister for the Twisted One.

I spent some time last weekend with a friend I hadn’t seen in years. I was very surprised to learn she’s voting for Trump. She’s not a conservative and was never especially well-informed, politically. But she said 2016 made her start paying more attention because “I couldn’t understand all the hatred people had for this man.”. She talked about the economy he gave us ( “think what could have been done if people had helped him instead of just pick, pick, pick”) and the Dems love of illegal immigrants scares her.

I know there are many out there who are like her, just sick of the 24/7 hate-fest!

How do we know these people aren’t lying about not being Republican or not never have voted? These other polls showing way higher support among minorities how do we know its not white Republicans saying they are hispanic or black?

From that picture, it appears the cancel party is cancelling themselves.

Kinda like the movie Logan’s Run but in this case everyone with an IQ over 30 is sent to Carousel.

12 posted on 10/28/2020 6:41:54 AM PDT by HombreSecreto (The life of a repo man is always intense)
[ Post Reply | Private Reply | To 3 | View Replies]
To: SeekAndFind
These stats are consistent rally after rally. A number of Freepers have been posting McDaniel's stats from rallies on the LIVE rally threads. In a way, this is old news.

Once you see the pattern the next logical question to be asked is what do all these "NOT Republican" and "did not vote in 2016" rally attendees do after they leave the rallies.

The photo is where we had to go early vote.

Hours of waiting in line, cars parked all along the surrounding roads and people walking long distances to the voting place.

We got in and out pretty fast because someone in line gave up their place for Himself’s CHF issues.

Otherwise, we’d have been there for hours.
I didn’t see a lot of what I’d call “liberal looking people”, either.
Lots of TRUMP masks.

I intend to go watch what happens at the local high school which would have been my election day place but I decide to take him in for early voting on the last warm day we’ll have for weeks.

The chairs that are filled are filled with donors, Party officials, maybe staff in needed. They take no chance someone may report anything they do not want reported and no questions asked.

As I posted in another thread concerning that picture yesterday, it’s Joe Biden’s America where people are told what to do and how to do it. We have to get that message out.

mainstream media narrative, you’ll believe that, even though the presidential race is tightening, Biden still maintains a lead and can handily win...