“America was an idea.”

Former Vice President Joe Biden tweeted that statement Wednesday evening, describing the country he wishes to lead — in the past tense.

Biden included a link to a podcast interview with Brené Brown, and an audio clip in which he repeated the same message — “America was an idea”:

‘WAS’ being the keyword if those idiots are elected... 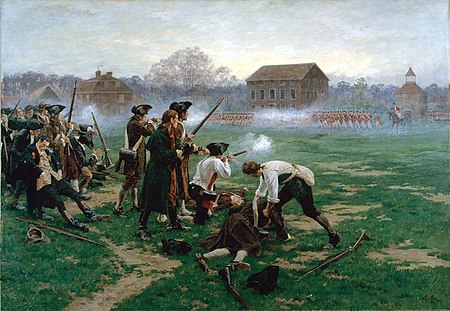 Lexington green? Yeah, that was the Green New Deal in 1775.

Joe Biden was a plagiarist, one who steals other peoples’ ideas and presents them as his own.

I don’t think this was an original thought of Biden’s. Truth be known his behind the scenes marxist/socialist/communist controllers spoon feed him this stuff and he dutifully goes out and earps it up to the press each day.

Joe was an idiot.

So Joe, we should have not even pursued the ‘idea’??? We should have just done what the British said??? The world would be so much better today????

America is the greatest nation in history because it was the first nation in history founded on the principles necessary for life proper to a rational being. It was a new political paradigm composed of ideals whose complete realization can only be achieved in the remote future. The fact that humans, with a fallen nature, have not yet fully achieved those ideals does not negate or nullify those ideals or principles, or make America a bad country.

Libs destroy everything they touch....EVERYTHING.
America is their crown jewel.

Strange that there exists no mention of America being just an idea in the Constitution. It appears the Founders were setting up a nation to guarantee the idea of liberty.

Biden has been in Washington for 47 years, but he evidently thinks that it is not him that has fallen short.

The Brene brown podcast connection here worries me. I know this podcast and this election seems to be shaping up very much male vs female which is not good as females vote more.

Guided by God, our Founding Fathers envisioned a country where The People would control themselves, not be controlled. Y the Government. Our ‘leaders’ now believe they should have complete control over us, instead of serving us.

God’s greatest experiment in freedom for the People is in peril. This election will determine if we keep on the path of self governance OR we go down the Socialist/Communist rabbit hole with every other country on Earth. There is only one country that is a beacon of Light in the dark. I pray and believe that the American People will choose the right path.

Everything is an idea. Reality is truth and cannot be the same for everybody. But life is the culmination of ideas from that same everybody to reach an undeterminable goal.

Joe is the same as everyone else, no smarter, no better. His reality is different than others and is somehow always a copy of his imagination. He really thinks he can change things that he has no power over. So he philosophizes his limited reality into perceived success for everybody based upon a limited amount of followers and an unlimited amount of people looking for something, anything, to make their life better, and are miss taught the need. Kind of like a baby that cries because it needs something, it just doesn’t know what with only it’s surroundings.

An organization that represents itself as nirvana like the socialist/libs is just pandering for themselves. And they are the greatest con in the world. Maybe a well planned one, but the best. And Joe is hip deep in it whether he is aware of it or not. Or is aware of anything but his perceptions that are destined for failure based upon other’s reality. Unfortunately, too many have been taught that reality isn’t fair or right. And fantasy is safer and easier to manipulate. It creates brainless people, zombies, rather than productive humans. And some feed off that, like Joe, and other democrats in all their ways, in his stupor.

16 posted on 10/22/2020 7:02:59 AM PDT by Redwood71
[ Post Reply | Private Reply | To 1 | View Replies]
To: mjp
"America is the greatest nation in history because it was the first nation in history founded on the principles necessary for life proper to a rational being. It was a new political paradigm composed of ideals whose complete realization can only be achieved in the remote future. The fact that humans, with a fallen nature, have not yet fully achieved those ideals does not negate or nullify those ideals or principles, or make America a bad country."

BRAVO! One of the best posts I have read on a while on here.

There was a democrat in the past few years, who said he wondered what form of government the US would have in the near future. it may have been Biden.

Sounds as if that person has no confidence in our current Constitutional government.

Democrat party members have always hated the idea of America.
They are the ones who brought chaos to our country.

If America ‘was’ an idea, why are folks from all over, still dying to get here?