Rudy is going into more details with evidence. He states on Twitter: "Tonight I react and share a private text message that describes the ongoing schemes by the Biden Crime Family."

Go Rudy! One the bravest men we got.

Looks like he’s had a meltdown. He looks terrible.

This is the story twitter censored——copied and posted on Judiciary Committee web site.

Hunter Biden introduced his father, then-Vice President Joe Biden, to a top executive at a Ukrainian energy firm less than a year before the elder Biden pressured government officials in Ukraine into firing a prosecutor who was investigating the company, according to emails obtained by The Post.

The never-before-revealed meeting is mentioned in a message of appreciation that Vadym Pozharskyi, an adviser to the board of Burisma, allegedly sent Hunter Biden on April 17, 2015, about a year after Hunter joined the Burisma board at a reported salary of up to $50,000 a month.

“Dear Hunter, thank you for inviting me to DC and giving an opportunity to meet your father and spent [sic] some time together. It’s realty [sic] an honor and pleasure,” the email reads.

An earlier email from May 2014 also shows Pozharskyi, reportedly Burisma’s No. 3 exec, asking Hunter for “advice on how you could use your influence” on the company’s behalf.

The blockbuster correspondence — which flies in the face of Joe Biden’s claim that he’s “never spoken to my son about his overseas business dealings” — is contained in a massive trove of data recovered from a laptop computer.

The computer was dropped off at a repair shop in Biden’s home state of Delaware in April 2019, according to the store’s owner.

Other material extracted from the computer includes a raunchy, 12-minute video that appears to show Hunter, who’s admitted struggling with addiction problems, smoking crack while engaged in a sex act with an unidentified woman, as well as numerous other sexually explicit images.

The customer who brought in the water-damaged MacBook Pro for repair never paid for the service or retrieved it or a hard drive on which its contents were stored, according to the shop owner, who said he tried repeatedly to contact the client.

The shop owner couldn’t positively identify the customer as Hunter Biden, but said the laptop bore a sticker from the Beau Biden Foundation, named after Hunter’s late brother and former Delaware attorney general.

Photos of a Delaware federal subpoena given to The Post show that both the computer and hard drive were seized by the FBI in December, after the shop’s owner says he alerted the feds to their existence.

But before turning over the gear, the shop owner says, he made a copy of the hard drive and later gave it to former Mayor Rudy Giuliani’s lawyer, Robert Costello.

Steve Bannon, former adviser to President Trump, told The Post about the existence of the hard drive in late September and Giuliani provided The Post with a copy of it on Sunday.

Less than eight months after Pozharskyi thanked Hunter Biden for the introduction to his dad, the then-vice president admittedly pressured Ukrainian President Petro Poroshenko and Prime Minister Arseniy Yatsenyuk into getting rid of Prosecutor General Viktor Shokin by threatening to withhold a $1 billion US loan guarantee during a December 2015 trip to Kiev.

“I looked at them and said: I’m leaving in six hours. If the prosecutor is not fired, you’re not getting the money,” Biden infamously bragged to the Council on Foreign Relations in 2018.

Shokin has said that at the time of his firing, in March 2016, he’d made “specific plans” to investigate Burisma that “included interrogations and other crime-investigation procedures into all members of the executive board, including Hunter Biden.”

Joe Biden has insisted that the US wanted Shokin removed over corruption concerns, which were shared by the European Union.

Meanwhile, an email dated May 12, 2014 — shortly after Hunter Biden joined the Burisma board — shows Pozharskyi attempting to get him to use his political leverage to help the company.

The message had the subject line “urgent issue” and was also sent to Hunter Biden’s business partner, Devon Archer, who also sat on the Burisma board at the time.

Pozharskyi said that “the representatives of new authorities in power tend to quite aggressively approach N. Z. unofficially with the aim to obtain cash from him.”

N.Z. isn’t identified in the email but appears to be a reference to Burisma founder Mykola Zlochevsky, whose first name is a Ukrainian version of “Nicholas.”

When the alleged shakedown failed, “they proceeded with concrete actions” in the form of “one or more pretrial proceedings,” Pozharskyi wrote.

“We urgently need your advice on how you could use your influence to convey a message / signal, etc .to stop what we consider to be politically motivated actions,” he added.

Hunter Biden responded by saying he was with Archer in Doha, Qatar, and asked for more information about “the formal (if any) accusations being made against Burisma.”

“Who is ultimately behind these attacks on the company? Who in the current interim government could put an end to such attacks?” he added.

The exchange came the same day that Burisma announced it had expanded its board of directors by adding Hunter Biden, who was put in charge of its “legal unit and will provide support for the Company among international organizations,” according to a news release that’s since been scrubbed from Burisma’s website.

Hunter Biden actually joined the board in April 2014, according to multiple reports.

His lawyer said last year that Hunter was “not a member of the management team,” adding, “At no time was Hunter in charge of the company’s legal affairs.”

About four months after Hunter Biden’s correspondence with Pozharskyi, Archer forwarded Hunter Biden an email chain with the subject line “tax raise impact on Burisma production,” which included Pozharskyi saying that the Ukrainian cabinet had submitted new tax legislation to the country’s parliament.

“If enacted, this law would kill the entire private gas production sector in the bud,” Pozharskyi wrote.

In the Sept. 24, 2014, email, Pozharskyi also said he was “going to share this information with the US embassy here in Kyiv, as well as the office of Mr Amos Hochstein in the States.”

At the time, Hochstein was the State Department’s newly appointed special envoy and coordinator for international energy ­affairs.

In December 2017, the Naftogaz Group, Ukraine’s state-owned energy company, announced that Hochstein had joined the company as an independent director, but on Monday he announced his ­resignation.

“The company has been forced to spend endless amounts of time combating political pressure and efforts by oligarchs to enrich themselves through questionable transactions,” Hochstein wrote in an op-ed published by the Kyiv Post.

In addition to denying that’s he’s spoken to Hunter Biden about his overseas business dealings, Joe Biden has repeatedly denied any conflict of interest or wrongdoing by either of them involving ­Burisma.

Last February, he got testy during an appearance on NBC’s “Today” show when co-host Savannah Guthrie questioned whether it was “wrong for [Hunter] to take that position, knowing that it was really because that company wanted access to you.”

“Well, that’s not true. You’re saying things you do not know what you’re talking about,” the elder Biden responded.

23 posted on 10/14/2020 4:04:10 PM PDT by Liz ( Our side has 8 trillion bullets; the other side doesn't know which bathroom to use.)
[ Post Reply | Private Reply | To 20 | View Replies]
To: ConservativeInPA
I'm a little ticked at all the Fearpers that don't have the testicular fortitude to fight. They give up before they even see the evidence. (This video is about 15m and we have people nay saying within minutes of the post. They didn't even watch.)

I believe these same Fearpers are bullied by government to wear masks and social distance while shivering in fear over the China Plague. That would be understandable if they have comorbidities, but they are okay with taking healthy people's freedom and liberties away for their false sense of security.

It's sickening. Get some manhood.

I Love you all. But I don’t receive any respect and that’s fine I guess - works for you apparently. I hope you all can do what I did and pay for everything for the entire family for 30 years. It’s really hard. But don’t worry Unlike Pop I won’t make you give me half your salary.

Re: Your picture of Biden - is that REALLY how awful he looks these days? Yikes!

Wonder if this ‘scandal’ will be the thing that finally kills him.

At least he can be with Beau - he genuinely seemed to care for that son; he used his ‘first deceased family’ as a political prop, IMHO.

Wait - he and Beau will probably be in two different afterlives, LOL!

Hunter and ‘Dr.’ Jill can rot, for all I care. Schemers and jerks!

Just because the lib media ignores it doesn’t mean these aren’t bomb shells. These are very damaging and I thank Rudy Giuliani for cleaning up New York City and now helping drain the swamp. He needs to be attorney general next term .

Rudy is great....some people around here are just negative all the time ......if you could do a better job, then do it...otherwise, let those willing to speak out take the reins....

Rudy does a great job of laying it all out. Biden and his family should be in prison.

I see some negative comments from Freepers about Rudy on this thread. I don’t watch a lot of Rudy’s videos, but this one is great. Everyone should watch it. Whatever opinion you have about Rudy based on past experience, set that aside and watch this video. 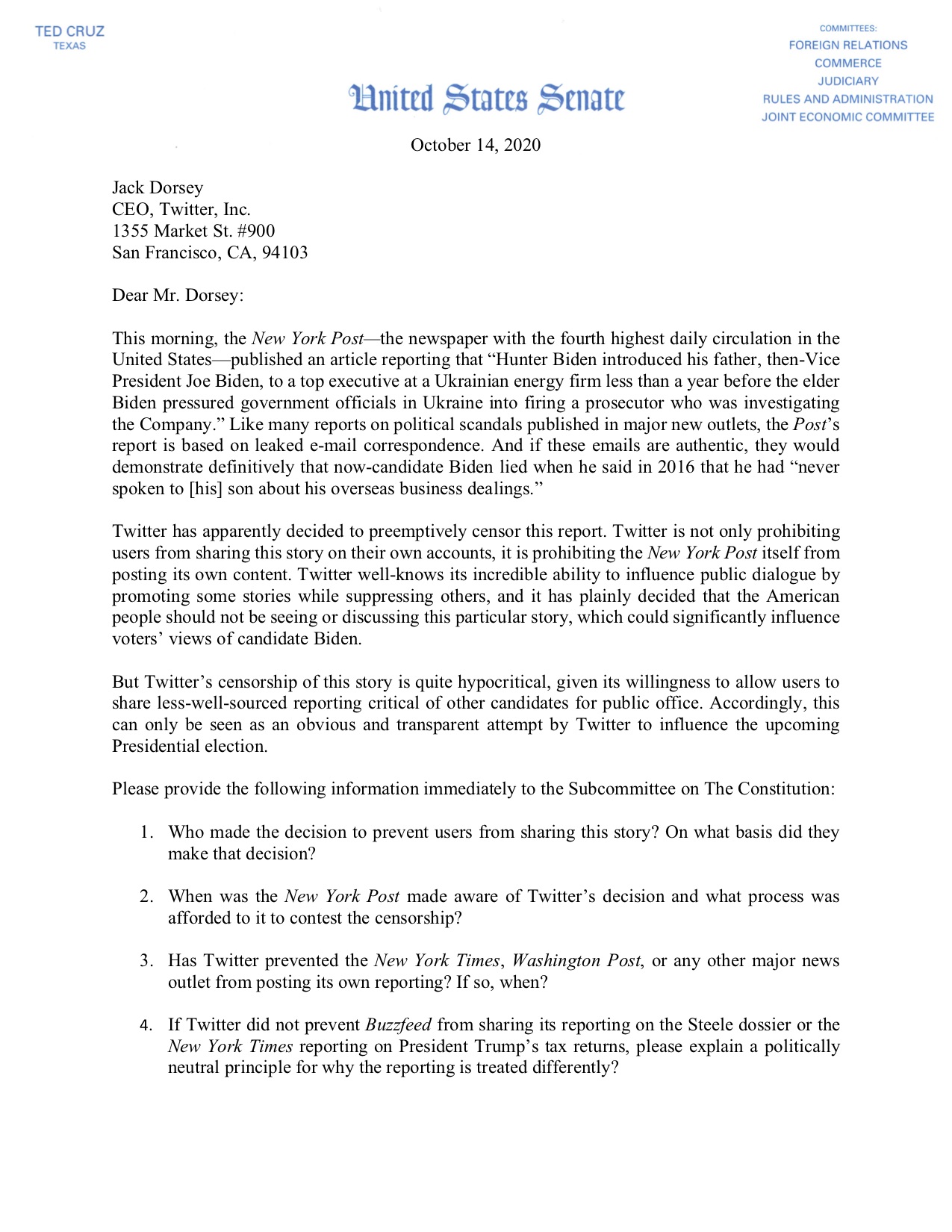 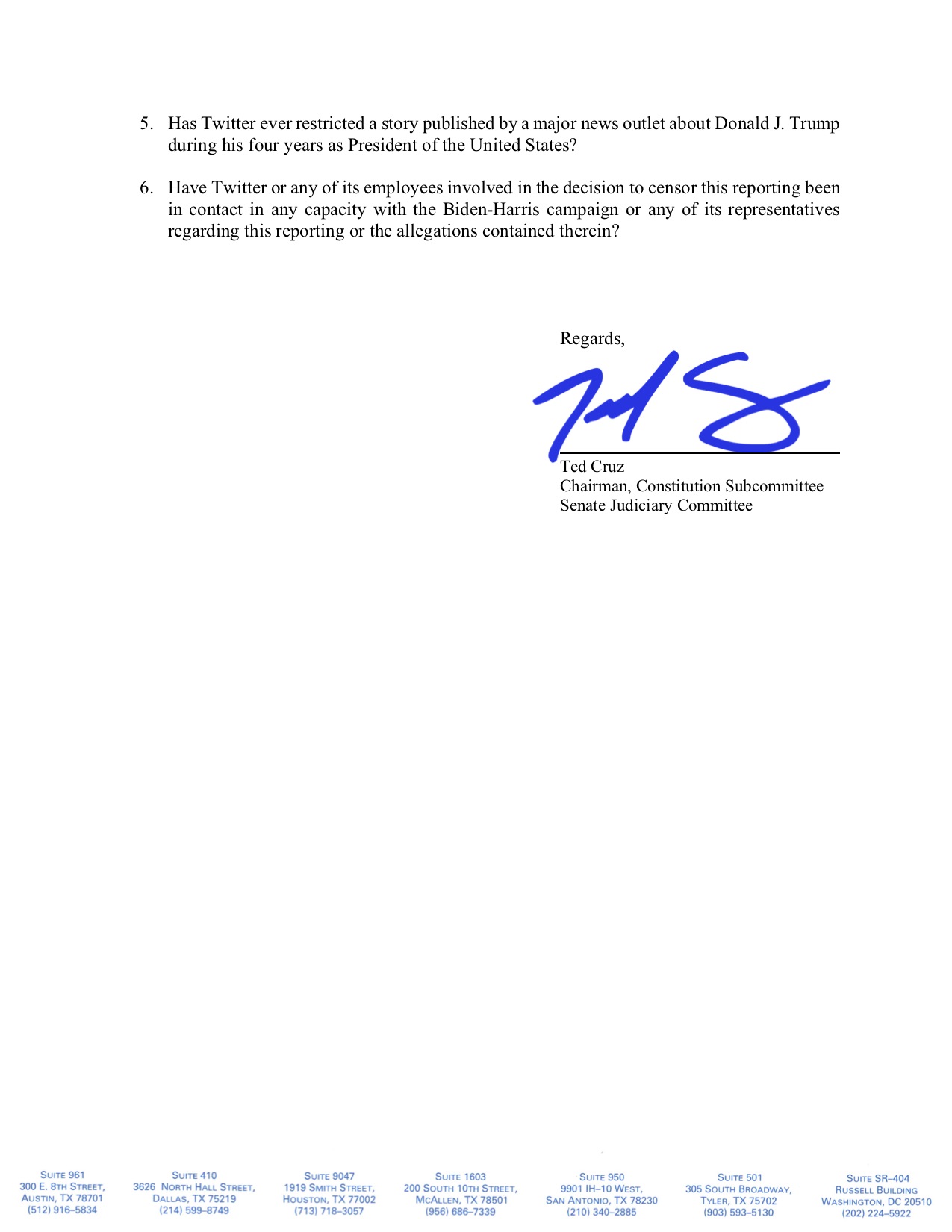 our country has been for sale for a long time....

which is why we pay exorbitant prices for drugs that are cheap everywhere else in the world, or why our manufactoring has been decimated, or why we have to get almost all our medical supplies and pharmaceuticals from China...

no on has cared about the peace and prosperity of the American people....but Trump does.....

Joe and Hunter should both be taken away in handcuffs. But this kind of thing was routine in the Obama admin. They even stole billions of dollars from the state dept when Hillary was in charge. The MSM didn’t bat an eye because Obama was black and democrat and stuff, so they figured he couldn’t possibly be corrupt. They just attacked anyone who wanted to make an issue of any of it.

This is a Must-watch

They should all go to the Fed Pen for life!!

Sen Kennedy is reacting to the news, not fomenting it.