Senate Minority Leader Chuck Schumer said “everything is on the table” if Democrats win a majority of the Senate, including making Puerto Rico and Washington, DC, states.

“I’m not busting my chops to become majority leader to do very little or nothing. We are going to get a whole lot done. And as I’ve said, everything, everything is on the table,” the New York Democrat said on MSNBC’s “The ReidOut” on Wednesday....

Host Joy Reid asked Schumer if statehood would be on the table for Washington and Puerto Rico if Democrats control the chamber next year.

“I would — believe me, on DC and Puerto Rico, particularly if Puerto Rico votes for it, DC already has voted for it and wants it. I’d love to make them states,” he said.

Republicans can threaten the same thing with much more credibility. Just as West Virginia split from Virginia, many conservative areas of the country would love to split from state governments that do not represent them. This is a fundamental issue of government by consent. For example, consider the proposed State of Jefferson, which includes northern CA and southern OR. 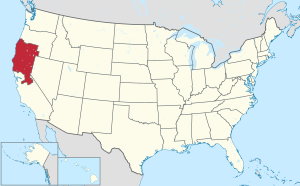 A chunk of the states exist the way they do because Democrats weaponized the process to preserve slavery.

The bedroom communities of northern Virginia are far more a part of the D of C than they are of Virginia.

The trouble with that theory is would the R’s ever regain control of any branch of government?

A better strategy would be to consolidate blue states out of existence and base reapportionment on land area not population.

NOBODY IS ABOVE THE LAW, Order AG Barr to Prosecute Schumer for his Criminal Terrorist Threats against a sitting Supreme Court Justice.

And we could add North Minnesota, East Washington, and probably a couple more!

So Schumer the Alien wants to steamroll the wisdom of the Founders and make the federal reservation a State?

It was intended that it NEVER be that.

It is SUPPOSED to be neutral ground, not a federal tie breaker vote, trying to be Rome.

The SOB and his buddies need to pick up and head off to another country more to their liking. This one isn’t theirs.

As for Puerto Rico, it can be given its independence and go back to Spain if it so wishes. Ethnically and politically it’s not American. At this point, Statehood would just be an excuse to demand that tens of billions more be poured into the place.

then there could be Eastern Washington, East Oregon, North Florida, North California, The Rest of Minneapolis, East Maryland... bring it.

A pollo in every pot! Wadda marooon...

SOOOO-—WHERE would all the Federal buildings move to?

Constitution clearly says FEDERAL GOVERNMENT cannot be in any state...

This is a conflict.

Is there enough rope in the US?

If Jefferson becomes a state, I’m moving there the next day.

14 posted on 10/02/2020 12:37:43 PM PDT by P-Marlowe (Freep mail me if you want to be on my Fingerstyle Acoustic Guitar Ping List)
[ Post Reply | Private Reply | To 1 | View Replies]
To: Meatspace
A better strategy would be to consolidate blue states out of existence and base reapportionment on land area not population.

Good idea. Make the great state of New England. Combine Delaware and NJ, and add all of DC, except the capital area, to Maryland.

I bet every blue state has red parts that would love to leave. I think the quiet corner of Connecticut is one. Think of any others?

Fwiw, TEXAS is allowed to SELF-divide, under The Treaty of Annexation of 1845, into FIVE States IF we ever choose & “upon our own motion”.

I suspect that LEFTIST heads all over the USA would IMPLODE (as they are EMPTY) at the thought of EIGHT new Texas Senators, being sworn in at once.

About 25 years ago, there was a SINCERE attempt to divide into: NORTH TEXAS, SOUTH TEXAS, EAST TEXAS, WEST TEXAS & CENTRAL TEXAS.
(The attempt came to NOTHING because NONE of the “new State advocates” were willing for any other State to have our ALAMO SHRINE.)

Puerto Rico has occasional plebiscites in which they vote to continue as they are, go for statehood or become independent. The Statehood vote has never been close. If the people don’t want statehood, can Congress force it on them??