President Donald Trump’s Supreme Court nominee Amy Coney Barrett has come under fire for her affiliation with a Christian school that upholds the biblical definition of marriage as a union between only one man and one woman.

A report in Politico published Sunday detailed Barrett’s association with the People of Praise, a Charismatic Christian group founded in Indiana in 1971 that has been described as a “cult” by some of her detractors.

The article noted that People of Praise runs the Trinity School at Greenlawn in South Bend, a “private intermediate and high school that is considered by some to be the best — and most conservative — school in South Bend.”

Adam Wren, the Indianapolis-based Politico contributing editor who wrote the aforementioned article, took to Twitter to state that “Amy Coney Barrett was a trustee at a South Bend private school that describes ‘homosexual acts’ as ‘at odds with Scripture’” and believes “marriage was between ‘one man and one woman’” years after the Supreme Court made same-sex marriage a national right in 2015.

Trinity School outlines its beliefs and commitment to creating a “culture of learning and a culture of Christian life” on its website.

“We understand marriage to be a legal and committed relationship between a man and a woman and believe that the only proper place for sexual activity is within these bounds of conjugal love,” the school statement reads.

Wren described a previous version of the statement, which had similar language, as “at odds with American law.”

While the legality of same-sex marriage has become quite popular among the American public in the years since the Obergefell v. Hodges ruling, many religious organizations and schools hold to biblical definitions of marriage in their statements of faith and policies.

Barrett has not commented publicly about her association with People of Praise. The group's spokesperson declined a request by Associated Press to confirm whether or not Barrett and her husband are members.

According to AP, Barrett's father, Michael Coney Sr., has served as the principal leader of People of Praise's New Orleans chapter and sat on the group's board of governors as recently as 2017.

Barrett has faced intense questioning about her religious beliefs in recent years.

In 2017, as she was nominated to her current position on the U.S. 7th Circuit Court of Appeals, Sen. Dianne Feinstein, D-Calif., questioned her about the “dogma” that “lives loudly within you.” Feinstein said the “dogma” was concerning when it comes to “issues that large numbers of people have fought for years in this country."

Now that Barrett has been nominated to the Supreme Court, she will have to appear before the Senate Judiciary Committee once again, where she could likely face more questions about her faith as well as her relationship with faith-based organizations.

The confirmation hearings are scheduled to begin Oct. 12

Last week, when Barrett was speculated to be the person who Trump would select as the nominee, Newsweek released an article accusing the People of Praise of being the inspiration behind Margaret Atwood’s dystopian novel The Handmaid’s Tale.

The outlet was later forced to issue a correction saying that Atwood “never specifically mentioned the group as being the inspiration for her work.”

In 2018, The Washington Post ran an article that poitned out that many were concerned that Barrett’s relationship with People of Praise could have “a potentially inappropriate sway over a judge’s decision-making.”

Barrett is not the first public figure to face criticism over her relationship with a school that subscribes to the biblical teachings about marriage.

Second Lady Karen Pence received scrutiny for teaching at a private Christian school in Virginia that prohibits students and their families from engaging in conduct that does not comport with the “biblical lifestyle the school teaches,” including by “participating in, supporting, or condoning sexual immorality, homosexual activity or bi-sexual activity.”

In recent years, efforts to criticize anyone associated with a church or school that believes in the traditional definition of marriage were not limited to politicians.

In 2016, Chip and Joanna Gaines, the hosts of the popular house-flipping TV program “Fixer Upper,” received condemnation because the pastor of their church has taught that homosexuality is a sin.

In response to the criticism, Chip Gaines stressed that “We do not all have to agree with each other.”

“Disagreement is not the same thing as hate,” the television star said.

That same year, Brendan Eich, who had just been appointed CEO of the tech giant Mozilla, was forced to resign from his position after it became public that he donated to Proposition 8, the California ballot initiative that banned same-sex marriage in the state.

In 2009, Miss California USA Carrie Prejean contended that her answer to a question about same-sex marriage from one of the beauty pageant’s judges, openly gay entertainment blogger Perez Hilton, cost her the title of Miss USA.

Hilton did not respond favorably to Prejean’s answer, where she affirmed her support for traditional marriage, calling her a “stupid b****” and saying that if she had won, he would have gone up on stage and snatched the tiara from her head.

WELL OF COURSE it is.

The Christian Post stabs her in the back for being too Christian. 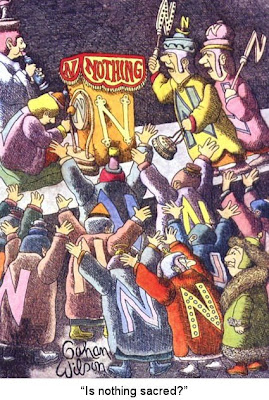 5 posted on 10/01/2020 8:12:25 AM PDT by Quality_Not_Quantity (This space vacant until further notice in compliance with social distancing 'guidelines')
[ Post Reply | Private Reply | To 1 | View Replies]
To: SeekAndFind

Saw another “handmaiden” comment yesterday someplace. If nothing else, they are committed.

They can investigate. They can call her names.
She WILL BE the next SC Justice before the election.

OMG, now it’s a cult if you believe marriage is between a man and a woman. We will have to fight to preserve our liberty, and the sooner the better.

Well, that’s it. She is affiliated with a Christian school which teaches that marriage is a man and a woman? Obviously she needs to be rejected for the Supreme Court.

It will be a public spectacle of how far we have fallen, if we see Judge Barrett publicly shamed by Corey Booker and Kamala and the gang, for having the audacity to be affiliated with an organization which has the “bigoted” view that marriage is a man and a woman.

Liberals claim to be “tolerant” but they are anything but.

Next we will discover that she believes Jesus is her Lord.

Is the so called “Christian Post” not the outfit that regularly spews out anti Trump propaganda?
Didn’t they strongly support Trump’s impeachment?

RE: The Christian Post stabs her in the back for being too Christian.

The Christian Post is simply REPORTING the news. Let’s not delve into the motives of the author.

Christianity Today is the rag that does!

I don’t think I ever saw an article at the CP supporting Trump’s impeachment. If there were, there’s a counter balancing article that OPPOSED IT.

Their last editor was a far left lunatic who strongly promoted President Trump’s impeachment.
It would be more accurate to call them “The Devil’s Post” instead of Christian Post.

They are Christian in name only aka CINO.
The false prophets that Jesus warned us about.