The US is cutting aid to Ethiopia over a controversial mega dam being built on a tributary of the River Nile. The move was triggered by Ethiopia's move to start filling the Grand Ethiopian Renaissance Dam before reaching agreement with Egypt and Sudan. Egypt has long been opposed to any development on the Nile that could reduce the amount of water it receives. Ethiopia says it needs the dam to provide a reliable electricity supply. Once fully operational, the Grand Ethiopian Renaissance Dam (Gerd) will be the largest hydro-electric plant in Africa and provide power to up to 65 million Ethiopians. While the US has not said openly how much aid will be cut, a US congressional source told Reuters news agency that "up to $100m or so will be affected, of which $26m is funding that expires at the end of the [financial year]". 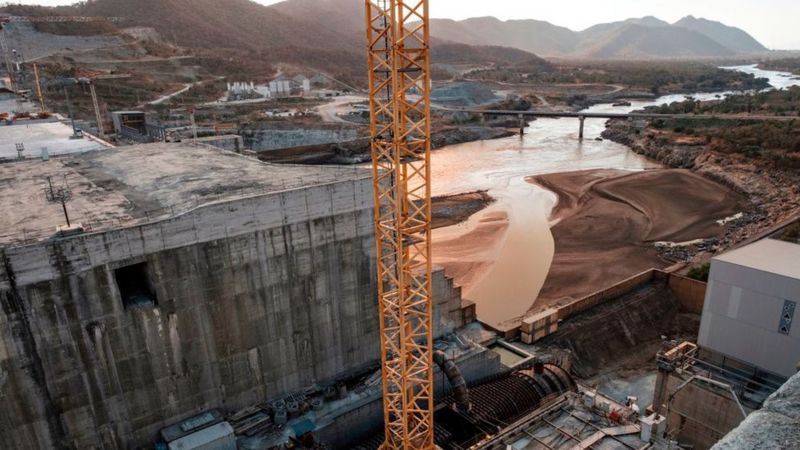 Why are we giving aid to Ethiopia? Why do we give money to half the countries we do? What’s in it for us?

4 And the Egyptians will I give over into the hand of a cruel lord; and a fierce king shall rule over them, saith the Lord, the Lord of hosts.

5 And the waters shall fail from the sea, and the river shall be wasted and dried up.

What could go wrong? If the GERD dam ever fails you can also count on the Aswan Dam in Egypt to fail and the civilization of Egypt to be wiped out.

Almost all of the infrastructure in Egypt lies on the floodplain of the Nile as does 95% of the population.

There goes the my pillow guy. Must be chicoms somewhere. It takes money.

That’s Haille Selassie of them.

That's good and stupid, but that's the nature of politics, particularly diplomatic politics.

Most of the World hates us for one reason or another. Some out of jealousy, some looking for competitive advantage, some... we've actually earned a certain enmity from.

However... No where, anywhere, in the Constitution does it say we have to support ANYONE else with our public tax monies. Period. Full stop. End of story.

If private individuals/companies want to donate... That's fine. Nothing stopping them.

But there is literally NO clause in the Constitution authorizing giving MY money to any other Country in "foreign aid".

Ethiopia is very close to the equator....

Why cannot they use solar panels for power instead of stealing water from other countries.

Should be a no-brainer.

This is probably why

“.... turbines and associated electrical equipment of the hydropower plants costing about US$1.8 billion are reportedly financed by Chinese banks. .....”

The Chinese probably bought the Ethiopian bonds and greased the palms of Ethiopian officials.

11 posted on 09/03/2020 9:29:54 AM PDT by Reily
[ Post Reply | Private Reply | To 10 | View Replies]
To: Roman_War_Criminal
Since Ethiopia has the money to construct and later
to operate the largest dam in Africa why does this
country need financial aid from the USA in the first place?

Americans have had enough of being taxed and seeing
their money given to foreigners while their country
has so many needs. Terminate all foreign aid!

I applaud Ethiopia for being visionary....

Egypt and Ethiopia will just have to work it out....

To their credit, if water flows through a large dam for hydro-electric power use only (not massive amounts diverted for drinking water or irrigation), then the “only” water loss to the countries and people downstream is that amount lost to evaporation from the surface water now exposed in the lake behind the dam, compared to what would have been evaporated from the (much smaller) river surface already present. SO there is water lost during hydro-electric power production, but not much.

Dam failure, as one person above pointed out, is a possibility, but in today’s world, you’d hope even the Ethiopians working with Chinese money could make a simple (but large) concrete gravity dam.

Now, will the Ethiopians limit water use to power only, and where will the power be used? Cities, farms, and homes and the area?
Or to power Chinese mines and refining plants for Chinese-paid ores going back as Chinese metal to ... China!

because solar panels only work when the sun is up. Hydro power is one of the best forms of electricity generation to keep a electrical system stable.

We should have cut the aid when they sold themselves to China.

Generally charity is for charity’s sake.

But yes, a lot of the charity could be cancelled.

A lot of the aid is channeled directly through to american companies and yes, a lot is wasted.

good point, that cruel king may have been the Assyrian king