California’s Radical Indoctrination A bill would establish a K-12 curriculum in the ‘four I’s of oppression.’
Wall Street Journal ^ | August 30, 2020 | WSJ Editorial Board

Conservatives and fair-minded liberals are alarmed that high schools are drawing up plans to teach the “1619 project,” the New York Times ’ revisionist account of race and the American founding, in history classes. The reality is turning out to be worse. The largest state in the union is poised to become one of the first to mandate ethnic studies for all high-school students, and the model curriculum makes the radical “1619 project” look moderate and balanced.

Last year California’s Assembly passed its ethnic-studies bill known as AB 331 by a 63-8 vote. Then the state department of education put forward a model curriculum so extreme and ethnocentric that the state Senate’s Democratic supermajority balked. The curriculum said among other things that “within Ethnic Studies, scholars are often very critical of the system of capitalism as research has shown that Native people and people of color are disproportionately exploited within the system.”

The bill was put on ice, but protests and riots in recent months gave Sacramento’s mavens of racial division more leverage. The education department delivered a new draft model curriculum this month, and AB 331 has been revived. It passed a Senate committee Aug. 20 and is expected to go before the full body soon. If Gov. Gavin Newsom signs it, the legislation would require all school districts to offer a semester-long ethnic studies class starting in 2025.

The model curriculum now on the education department’s website says the course should “build new possibilities for post-imperial life that promotes collective narratives of transformative resistance.” Yes, this is a course for K-12 students. It suggests teachers provide “examples of systems of power, which can include economic systems like capitalism and social systems like patriarchy.” Students can then be taught “the four ‘I’s of oppression”—ideological, institutional, interpersonal and internalized.

Based on Neo-Marxist post-modern philosophy that originated in the 1930s/40s Frankfurt school with Marcuse/Adorno and Habermas, and then bloomed into a full-fledged anti-western strain of thought with Michel Foucault and Giles Deleuze (among others), taking over US universities by the 1960s. Today all US graduates in any branch of social studies or humanities from any US university (except Christian or conservative universities) are awash in this ideology.

I advise any parent that truly loves their children to homeschool.

“the four ‘I’s of oppression”—ideological, institutional, interpersonal and internalized.
= = =

I would add ‘Imaginary’

Four I’s of oppression. I wear glasses so I am offended!

7 posted on 08/30/2020 7:49:33 PM PDT by reg45 (Barack 0bama: Gone but not forgiven.)
[ Post Reply | Private Reply | To 1 | View Replies]
To: karpov
Destroying the Four Olds began on August 19, 1966 in Beijing. The Four Olds are Old Customs, Old Culture, Old Habits and Old Ideas. One of the goals for the CR was to end these Four Olds, in order to modernize and create a new equal Chinese society. What Mao believed was that this plan would tear China away from its past and start out in a fresh way.

Mao wanted to replace the Four Olds with the Four News. During this process, schools and temples were destroyed, their teachers and parents vilified and some were beaten to death or driven to suicide. Many stores were renamed and many shrines were rebuilt to replace the old. Many homes were searched by the Red Guard and items considered 'old' were taken away... 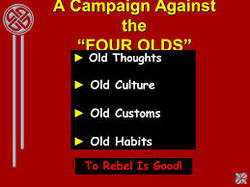 This is what happens when the RADICAL MARXIST DEMOCRATS fully control a state. Take a good look America. Total destruction of American values.

Read it and VOTE RIGHT on November Third OR LOSE YOUR COUNTRY.

This is nothing more than Nazi race theory revisited

Whenever I read about this I hear the voice of Julius Streicher.

What is next, an “African-American” version of “The poisonous mushroom” and “Trust no fox in the green meadow and no Jew on his oath”?

Look those up; there is a college that has translated versions online.

Exactly. Cultural Marxism’s part in the quality of U.S. education in our universities is a scandal.

California may end a decades-old ban on members of the Communist Party working in its government, after the state Assembly approved a bill that would delete references to the party from its employment requirements.

The bill’s sponsor, Assemblyman Rob Bonta, D-Oakland, said that California’s laws should focus on individuals’ actions and evidence rather than political affiliations and what he termed “empty labels.”

Speaking on the floor of the Assembly, Bonta called the legislation a “cleanup bill that removes archaic and outdated references to the Communist Party in our state laws, specifically those stating that a public employee may be dismissed from employment if he or she advocates or is knowingly a member of the Communist Party.”

https://www.thenation.com/article/archive/communists-schools-controversy-california/
APRIL 6, 2008
Communists in the Schools: Controversy in California

The California legislature is considering a bill to repeal the law, passed in the heyday of McCarthyism, that permits the firing of Communist Party members who teach in public schools and community colleges.

The mainstream media hasn’t noticed, but Fox News, conservative think tanks and the right-wing New York Sun have complained loudly that the repeal “will promote communism in the public schools” (from the Fox News report).

The bill, proposed by a Democratic state Senator from Long Beach, Alan Lowenthal, would also eliminate the state’s loyalty oath. Currently public employees are required to swear that they do not belong to any organization “advocating the forceful or violent overthrow of the government of the US” or of the state of California.

With support from both of California’s big teachers’ unions, the California Federation of Teachers and the California Teachers Association, the bill passed its first committee vote, 5-3, on April 2. The Democrats control the both houses of the state legislature, so the chances for passage seem good.


I thought that at least one bill permitting Communists and seditionists to teach in California school passed and became law.

Joe Biden's plan is to mandate pre-school for 3 year-olds.

Yes. Five other I’s of Oppression.

school choice or home schooling, beware of the first it may be infected too

“Give me four years to teach the children and the seed I have sown will never be uprooted.”

Nothing new under the sun.