One dead, five injured in shooting at Chicago restaurant (one of many shootings)
fox ^

Six people were shot, including one who died at the scene, as they ate outside a restaurant in Chicago, according to the city Fire Department.

there’s no story. What the heck happened??

“One death is a tragedy, one million deaths is a statistic.”

The veal is the best in the city.

there’s no story. What the heck happened??

not sure it just recently happened

Good veal at that place? Sounds good, as long as you live to tell about it.

They voted for this.

I’m holding out hope that they will rectify the situation on November 3, but I am not under any illusions of false hope.

If they follow history and fail to make the necessary changes then I am officially out of sympathy.

I’m going to enjoy the spectacle of watching them live in the miserable world they have made and voted for themselves.

This is an election for choosing between stark contrasts - the choices are Making America Great again or looting it and burning it to the ground.

I’m totally shocked at how many well educated and successful people are on the side of the barricades with rioters and are excusing or even encouraging the violence, the terror as well as the burning and looting.

On the other hand, I’m pleasantly surprised that some of my more radically liberal friends are seeing the light and breaking ranks with revolutionaries and crossing the barricades to join the rest of America. 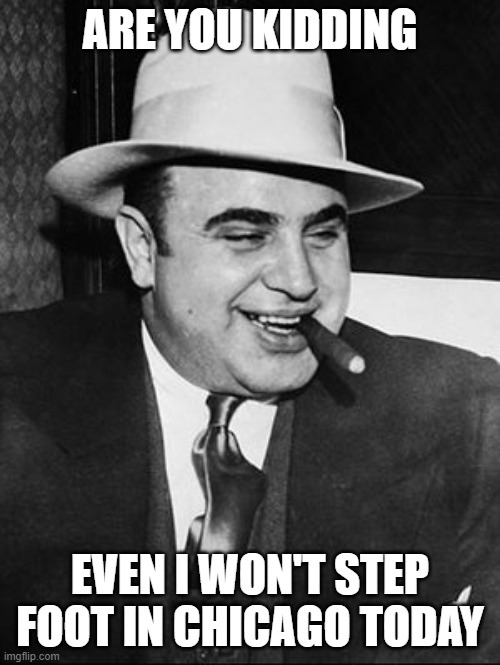 Fire Department? I guess I don't following the on-goings in Chicago closely enough, but it would seem like there would be a better department to handle a shooting.

is that with ‘red sauce’?

Has anyone in Chicago declared they love the smell of gunpowder in the morning?

With the amount of mostly peaceful shootings if they were using muskets they probably would have created a permanent ‘smog’ bank.

How many of those were Black men shot by police? The “peaceful protesters” want to know so they deploy the right number of rioters and looters in the area.

Good line. Maybe I'll steal it for my Tagline.

The really scary part is that the "burn it to the ground crowd (Democrats)" might actually win.

Probably the 32d street thugs attacked the 39th avenue thugs or the 12th court thugs killed some dudes from the 45th lane or the crips and the black deciples dissed someone’s grandma.....and so on.

At 513, Chicago has exceeded the highest number of homicides through August of the last 6 years =>